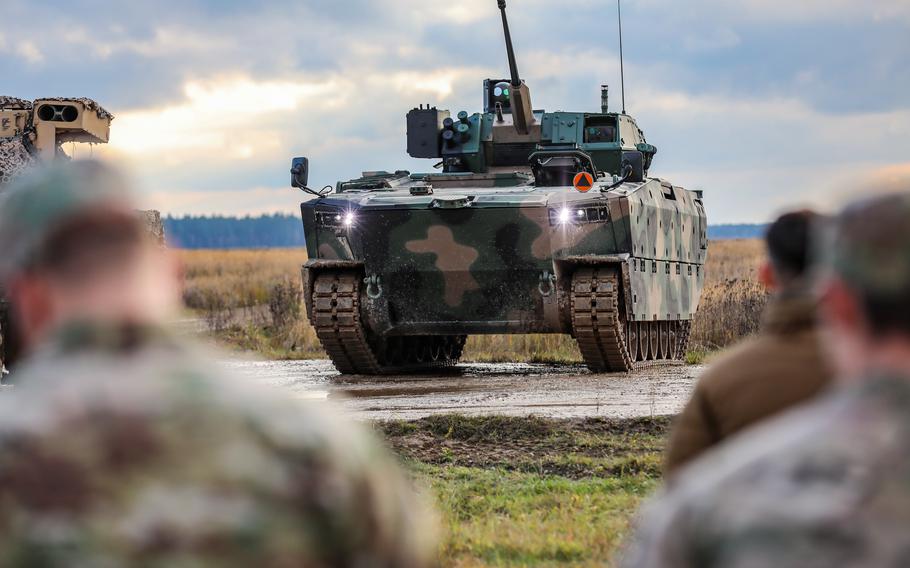 Poland's new infantry fighting vehicle, the Badger, is unveiled during a ceremony in Bemowo Piskie, Poland, Nov. 14, 2022. The Badger is the latest upgrade for the Polish army, which supports a U.S.-led NATO battlegroup in the country's north, not far from the Russian exclave of Kaliningrad. (Matthew Foster/U.S. Army)

The U.S.-led NATO battlegroup on the outskirts of Poland’s border with the Russian military exclave of Kaliningrad just got more support in the form of the Badger, a new allied fighting vehicle.

The Badger is the latest in a string of military upgrades for the Polish Army that has made it one of Europe’s most formidable ground forces. It replaces an older Soviet-era model and brings with it modernized armor and weaponry that will give a boost to troops on patrol, U.S. soldiers said as the vehicle was unveiled last week.

“Seeing what the Badger can do, through the vehicle’s capabilities and firepower, is what we need for backup on the battlefield,” Staff Sgt. Devonte T. Bass, a cavalry scout and tank commander for the 3rd Battalion, 8th Cavalry Regiment, said in a statement Nov. 14. 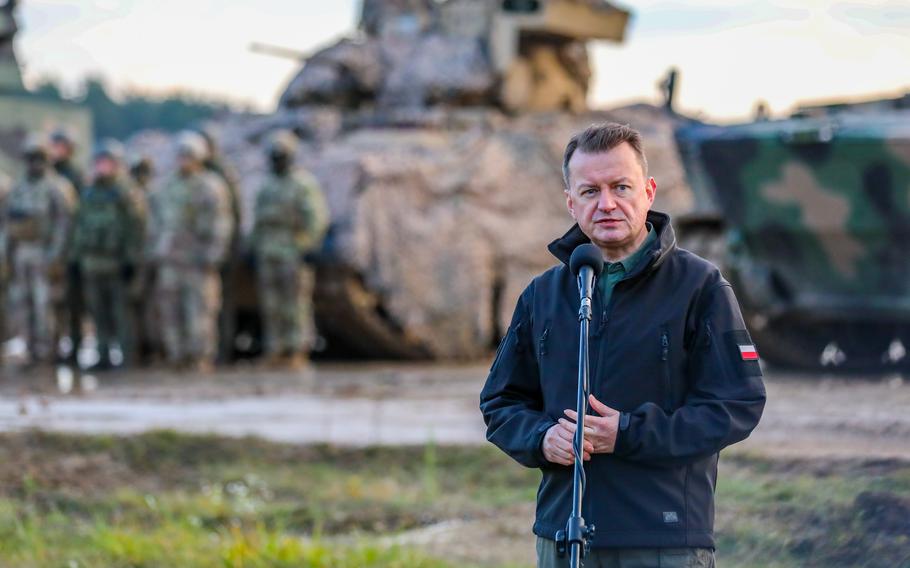 In Bemowo Piskie, Poland, about 1,000 U.S. infantrymen and other allied troops man NATO’s multinational group responsible for defending against potential aggression from Russia. They operate just 50 miles from the border with Kaliningrad.

American troops cycle through Bemowo Piskie on six-month rotations, living in barracks near a training area of some 42,000 acres, where they regularly participate in exercises with forces from other NATO member states.

The town, strategic for its proximity to Kaliningrad but otherwise isolated, serves as a launching pad for allies in the event they need to quickly defend vulnerable parts of allied turf, such as the so-called Suwalki Gap — a patch of Polish land lying between Kaliningrad and Russian ally Belarus.

Last week, Polish Defense Minister Mariusz Blaszczak visited the training ground to tout the introduction of the Badger into the battlegroup’s formation.

“The needs of the Polish army are very large, and one of the important elements of this process is the replacement of worn-out armored fighting vehicles with new vehicles,” Blaszczak said in a statement. “We are constantly modernizing the equipment of the Polish army.”

Poland has been on a U.S. weapon-buying spree over the past few years, which is paying dividends for NATO defenses along its eastern flank. Warsaw is currently in line to acquire nearly 100 Apache attack helicopters along with M1A1 Abrams tanks, Patriot missiles, HIMARS and F-35 fighter planes.

Poland also has made numerous weapons purchases from South Korea, which has emerged as a major supplier for the central European country.

“Both our armies are currently prioritizing modernization efforts in order to meet the adversarial threats around the world,” Lt. Col. Sean M. Castilla, the U.S. commander of NATO Enhanced Forward Presence Battlegroup Poland and leader of the 3rd Battalion, 8th Cavalry Regiment, said in a statement.

Given Poland’s proximity to both Ukraine and Kaliningrad, along with its vocal eagerness to host U.S. forces, the country has often been referred to as a center of gravity for the American military in Europe by U.S. commanders.

In addition to the NATO battlegroup in the northeastern part of the country that the U.S. leads, the Army maintains an armored brigade in Poland on a rotational basis along with various other units. In all, about 10,000 U.S. troops are positioned in Poland, up for around 4,000 before Russia’s full-fledged February invasion of Ukraine.

Poland also is home to the overseas headquarters of the Army’s V Corps in Poznan, which earlier this year was designated as the first permanent U.S. garrison in central and Eastern Europe.