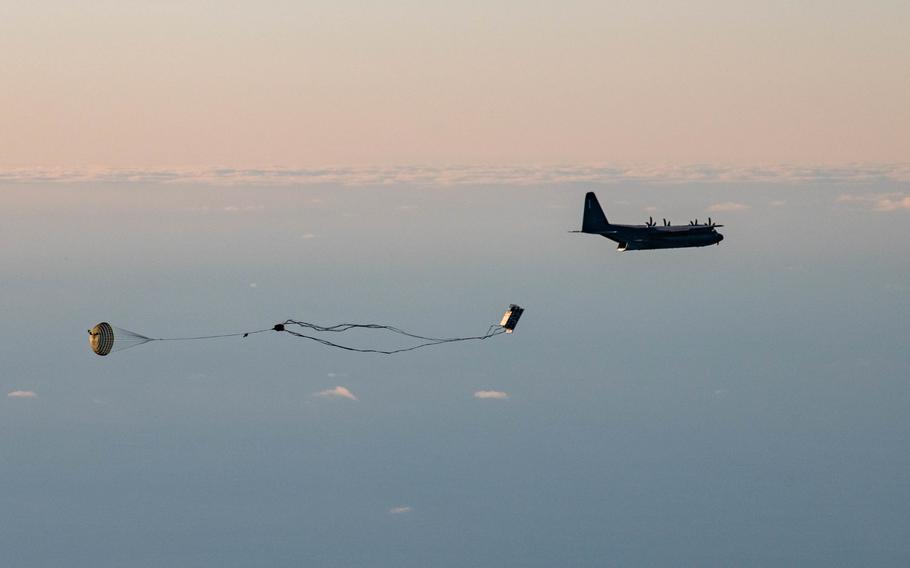 STUTTGART, Germany — U.S. special operations forces flying over the Arctic on Wednesday rolled a long-range missile out the back of a C-130 aircraft, dropping it by parachute before it blasted toward its target in the distance.

“It puts this thing within range of Russia. We are intentionally trying to be provocative without being escalatory,” Special Operations Command Europe’s Lt. Col. Lawrence Melnicoff told Stars and Stripes ahead of Wednesday’s launch. “We’re trying to deter Russian aggression, expansionist behavior, by showing enhanced capabilities of the allies.”

The missile launch, carried out inside the Arctic Circle at Norway’s Andoya Space Range, also showcases how allies can muscle up by mixing and matching weapons systems in new ways, Melnicoff said.

It was the culmination of the Stuttgart-based SOCEUR’s demonstration of American and allied units’ ability to rapidly mobilize and deliver long-range precision fire over great distances. Airmen load a Rapid Dragon deployment system onto an MC-130J aircraft ahead of an airdrop in November 2021 at Eglin Air force Base, Fla. Special operations forces deployed the system in a demonstration over the Arctic on Nov. 9, 2022. (Air Force Research Laboratory)

The Norway exercise coincided with drills in Poland and Romania. They’re all part of U.S. European Command’s Atreus program, which aims to expand military options for allies.

Similar missions have been held in the Baltics and Romania involving aircraft loaded with High Mobility Artillery Rocket Systems, which are flown to landing zones and offloaded for quick-strike targeting.

Such operations are connected to planning for the worst-case scenario in the event Russia were to take aim at allied military hubs in Europe, said Melnicoff, who oversees Atreus for SOCEUR.

“It complicates Russian decision-making because we know that they’re targeting very, very large specific aggregations of allied power, ... Ramstein Air Base, RAF Lakenheath, things like that,” Melnicoff said. “We’re survivable. If worse comes to worst and somebody takes out these power hubs, we can forward-project precision artillery fire across the alliance with our partners.”

The Rapid Dragon concept has the attention of several allies, including Poland. While other allies don’t have long-range bomber strike capabilities like the U.S., they can mimic some of those effects by loading long-range missiles onto cargo aircraft.

The Red Dragon system uses a steel cage and can be loaded with Joint Air to Surface Standoff Missiles, which have a range of up to 1,200 miles depending on the variant.

“The way it works is it drops out of cargo aircraft like a heavy equipment air drop, so it’s completely a roll-on, roll-off package,” Melnicoff said.

After rolling out, the cage stabilizes under parachutes. Then a sling gate opens and the missiles drop out.

The system also has the potential to be paired with other types of materiel, including hypersonic weapons and swarm drones, Melnicoff said.

The concept was developed by the Air Force, which has been experimenting with the idea for the past couple of years.

“AFSOC’s greatest value to the joint force, as well as allies and partners, is when we find unconventional ways to deliver airpower,” Slife said Wednesday in a statement. “The future is going to be different than what we have experienced for the last 20 years.” A cruise missile is shown immediately after being dropped from an MC-130J cargo plane at White Sands Missile Range, N.M., in November 2021. Special operations forces performed a similar demonstration drop over the Arctic on Nov. 9, 2022. (Air Force Research Laboratory)