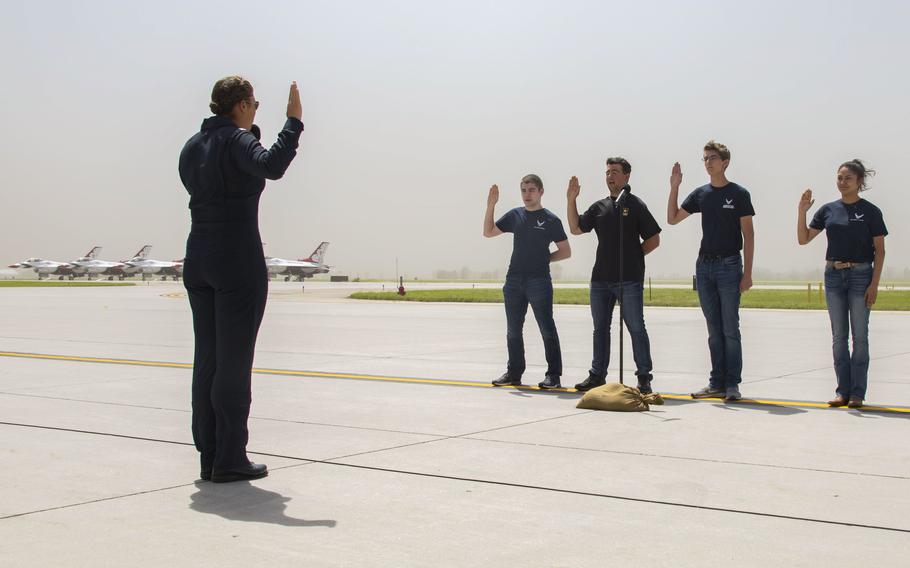 The Air Force announced it has expanded big bonus payments for recruits who enlist in certain high-priority specialties, offering more than $50,000 to some willing to ship quickly as the service fights through tough times attracting troops.

The Air Force will now provide enlistment bonuses ranging from about $3,000 to some $58,000 to recruits who enlist into 22 active-duty specialties through Sept. 30, the end of the 2022 fiscal year, the service said in a statement issued Wednesday. Service officials said the Air Force needs to send thousands more troops to basic training in the coming weeks to meet its 2022 recruiting goal of about 26,000 new recruits.

Military officials from the Air Force — as well as the other service branches — have described fiscal 2022 as the toughest recruiting year in decades. Officials have blamed historically low unemployment levels, the lingering impacts of the coronavirus pandemic, and a shrinking population of young Americans eligible to serve for physical, academic or other reasons.

The Pentagon has said among the 31.8 million 17- to 24-year-olds in the United States, only about 9.1 million meet the basic physical requirements to serve in the military and only about 4.4 million of those physically eligible meet minimal academic requirements to enlist.

The Air Force’s top recruiter, Maj. Gen. Ed Thomas, said Wednesday that the military must then compete with private sector, higher education and other government jobs for those young Americans eligible to serve, calling the current recruiting environment “a battle for talent.” Young Americans should see value beyond a paycheck in enlisting in the service, he added.

“Our Air Force value proposition is about far more than pay or compensation. It's primarily about opportunity and joining a community with an unmatched sense of purpose,” Thomas said. “But in a highly competitive labor market, enlistment incentives can help ensure we get the additional airmen required to fill our ranks and serve the nation.”

This week, the Air Force added maintenance-related specialties to its list of those eligible for bonuses. Those who sign up to maintain missile and space systems, facilities, military vehicles, refueling and bomber aircraft, fuel systems and aircraft armament are now eligible for a $3,000 bonus for signing a four-year contract or a $6,000 bonus for a six-year enlistment.

The service is offering the most cash to those willing to enter special operations or explosive ordnance disposal. Those specialties come with a $50,000 signing bonus for a six-year enlistment.

Those who enlist for six years to become survival, evasion, resistance and escape specialists are eligible for a $40,000 bonus.

The service is also offering up to an $8,000 bonus to recruits who can fill so-called “short-notice” slots to ship to basic training within five days of signing a contract, officials said.

The Air Force has paid more than 179 such quick-ship bonuses to recruits since announcing that program in April, according to the service.