Navy offering bonus of $25,000 to all recruits who ship out by June 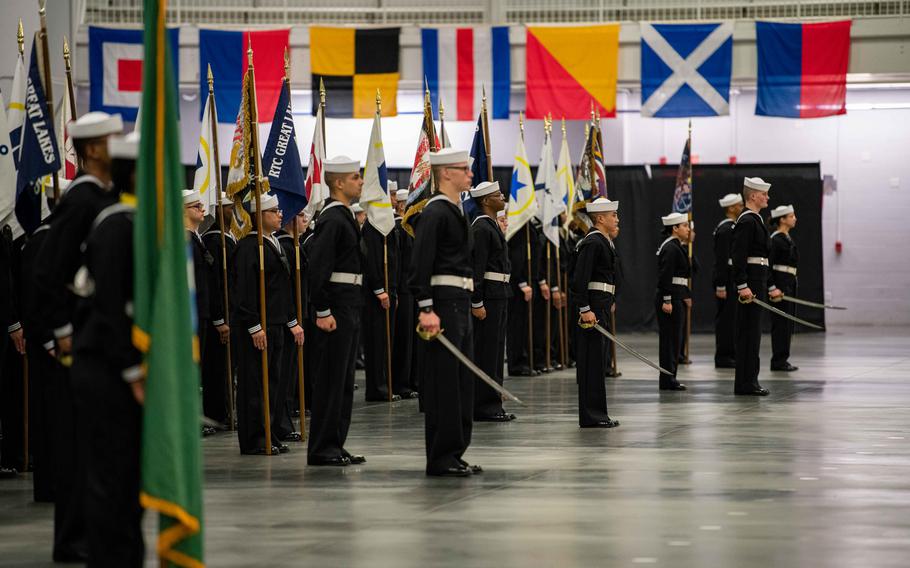 A group of 669 sailors graduated from Navy basic training April 1, 2022, at Naval Station Great Lakes, Ill. The Navy announced Thursday that anyone who enlists and ships out to basic training by the end of June will receive a $25,000 bonus. (U.S. Navy)

The Navy announced Thursday that for the first time the service will offer an active-duty enlistment bonus of $25,000 to anyone joining for any job in the service. However, they must be able to ship out to boot camp by the end of June.

Higher bonuses up to $50,000 could be available for certain jobs such as some on submarines and some in the information technology fields, according to the Navy. Recruits already scheduled for basic training between July and September can receive the $25,000 bonus as well, if they are willing to move their ship out date to before the end of June.

The military services are now competing in a post-pandemic job market in which the unemployment rate continues to decline, leaving employers fighting for workers. The unemployment rate in March dropped to 3.6%, near the 3.5% it was in February 2020 before the coronavirus pandemic began, according to the Labor Department.

The duration of this offer hinges on the budget, Benham said. He did not say how much money is available, but once it runs out, the bonuses will no longer be offered.

“The sooner they apply, the more likely it is that they will be able to take advantage of this unprecedented bonus structure,” he said.

Former service members — either from the Navy or other service branches — re-enlisting for active duty in the Navy at pay grades E-4 or below, and who meet specific bonus eligibility and did not receive a bonus in their first enlistment also qualify for the $25,000 bonus, the Navy said.

The Navy’s announcement follows a Rand Corp. report released in January that found the military service branches sent fewer recruits to boot camp in fiscal year 2020 than they did the previous year. The report also said recruiters were having a harder time reaching potential recruits because the coronavirus pandemic had limited in-person interactions.

To learn more about the range of bonuses and benefits the Navy offers, visit www.navy.com/joining-the-navy/enlistment-bonuses.