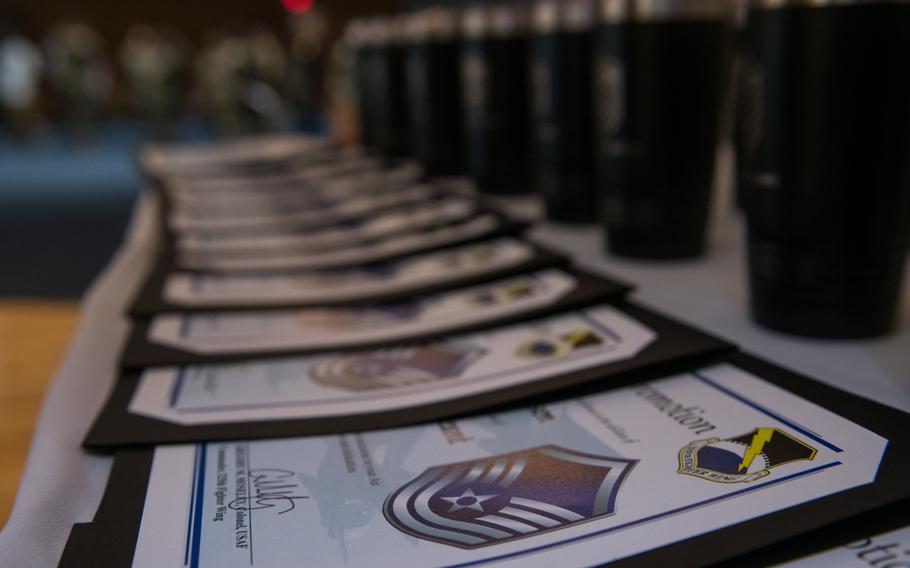 Master sergeant promotion certificates are on display at Tyndall Air Force Base, Fla., June 10, 2022. Air Force officials are projecting fewer promotions for airmen in the coming years as the service realigns its strength structure among its enlisted members. (Zachary Nordheim/U.S. Air Force)

Junior and mid-grade airmen are going to face years of lower promotion rates as a result of a personnel reshuffling in the Air Force’s enlisted corps, a statement posted Thursday on the service’s website announced.

Facing what it calls a lack of balance in its noncommissioned officer corps, the Air Force now projects changes to the grade structure for its enlisted ranks.

“Although this news may be discouraging for some, this revision is absolutely needed,” said Lt. Gen. Caroline Miller, deputy chief of staff for manpower, personnel and services.

The Air Force did not publicly release details on the revised force structure, but a post on the popular Amn/NCO/SNCO Facebook community page showed what appeared to be undated PowerPoint slides outlining projected strength allocations by rank.

According to the target projections in the slides, the service aims to reduce the number of airmen holding the rank of staff sergeant, which now stands at 27% of the total enlisted force, to 22% of the enlisted corps in 2023.

The change would create fewer promotion opportunities into the Air Force’s first NCO rank and keep many promotion-eligible service members in the junior airmen tiers longer.

Under the new model, the percentage of members at the E-4 senior airman rank is expected to grow from the current 19% to 24% of all enlisted members.

Other ranks are projected to see smaller fluctuations, and the most senior enlisted ranks, senior and chief master sergeant, are forecast to stay at less than 3% of the enlisted force combined.

Record-high retention levels amid the pandemic and lowered end-strength growth projections led to a realignment of the service’s enlisted grade structure, the statement said.

During the past six years, enlisted end strength grew by a combined total of nearly 16,000 airmen, allowing for faster promotion, the service said.

The service’s statement Thursday acknowledged that career field managers have voiced concerns over the marked decrease in experience, as junior enlisted personnel climbed the ranks faster.

Some of this perceived decline in experience can be explained by the elimination of time-in-grade and time-in-service points for enlisted promotions in 2016, Col. James Barger, commander of the service’s Manpower Analysis Agency, said Thursday.

Under the previous system, NCOs received promotion points simply for staying in the service longer than their peers.

Removing points for seniority alone, Air Force officials at the time said they wanted “to ensure performance carries the most weight when calculating points for promotion selection.”

However, the majority of the decline was due to a force structure with too many airmen in higher grades, Barger said.

“We also found that experience levels would continue to decline unless the Air Force lays in more junior airmen allocations and fewer E5-E7 allocations,” Barger said. “So we built a plan to transition to a healthier grade distribution by fiscal year 2025.”

An initial draft of the Air Force statement was posted Wednesday on the Amn/NCO/SNCO Facebook page. The text of the draft was nearly identical to that of the announcement made a day later on the service’s official website.

The draft drew more than 330 comments.

“Taking me back to the early/mid 90s when they did the same thing which resulted in promoting too quickly in the early 00s because of the NCO gap,” one commenter wrote. “The cycle remains the same.”