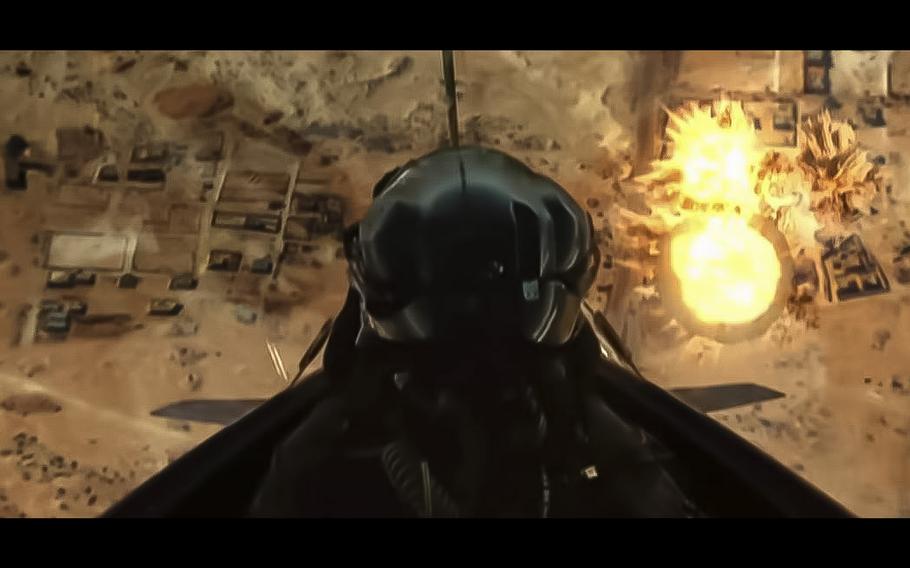 A video screen grab shows a scene from the Air Force commercial “Own the Sky.”  (U.S. Air Force Recruiting/YouTube)

(Tribune News Service) — Theater-goers seeing “Top Gun: Maverick” are being treated to a new Air Force recruiting commercial titled “Own the Sky,” complete with glimpses of F-35s, fifth-generation F-22s, an A-10 and even the rarely seen B-2 bomber.

“Today, a lot of Americans, they don’t personally know people in the military,” Thomas said. “So their exposure to the military often is going to be what they see in Hollywood or what they see on the television or in their communities.”

“So realistic films like ‘Top Gun’ that portray the military in a positive light, are exceptionally helpful for us,” Thomas added. “These are the impressions that we want people to see.”

He spoke of what he called “the Captain Marvel effect.”

After the release of the 2019 Marvel film “ Captain Marvel,” with its portrayal of Air Force pilot (and title character) Carol Danvers, the Air Force saw an almost immediate effect.

“We had the highest percentage of female applicants to the Air Force Academy in five years following that movie,” Thomas said. “Does popular culture make a difference? Absolutely.”

The Air Force and all military branches are using whatever recruiting tools they can. They find themselves competing with low unemployment, the after-effects of COVID and civilian employers who are increasingly willing to offer relatively higher pay and new benefits tailored to new employees.

The Air Force in April announced its own array of relatively hefty bonuses — some up to $50,000 — for recruits in certain specialty occupations.

Thomas said the bonuses are starting to have an impact. The Air Force has used more than 100 of its $8,000 “quick-ship” bonuses, given to those ready to ship out to basic training by Sept. 30 this year. The service has also given a “large number” of $3,000 to $6,000 bonuses for harder-to-fill jobs, he said.

‘I just saw how the Marines carried themselves’

Dayton-area Marine Corps recruiter Sgt. Taequan Callahan agreed that recruiting has its challenges today. But that’s nothing new, in his view.

“Recruiting will always have its challenges,” Callahan said. “Not everybody is qualified, unfortunately, to be a Marine.”

“When they say ‘the few and the proud,’ it’s really that,” he added, citing the Corps’ time-tested recruiting slogan.

Training was and is tough, PFC Moon acknowledged. “Indeed it was very difficult and challenging. You’re going into an environment where you don’t know anybody, people are screaming at you,” he said.

But that’s why he signed up.

“The Marines attracted me because I just saw how the Marines carried themselves and I saw how much confidence they had in each other and in themselves,” he said. “The family aspect of it. Every Marine has each other’s back, no matter what. That was just kind of what I needed at the time.”

“I’m going to be friends with these guys (his fellow recruits) for the rest of my career,” he said.

Moon was meritoriously promoted in boot camp to the rank of E-2, leaving recruit training not as an E-1 private, but as a private first class.

Zeroing in on a few key jobs, the Air Force added six skills to its fiscal year 2022 Initial Enlistment Bonus program in April for four or six-year contracts in certain “hard-to-fill job specialties.”

Thomas made the same arguments that all military recruiters make across the services: The military offers 30 days of paid leave, medical care, education benefits, training that can lead to solid civilian careers and more.

But the longer term challenges affecting military recruiting are largely cultural, he believes. He sees an “increasing disconnect” with civil society tied to decreasing exposure to the American military today, with fewer veterans, fewer military bases across the country and generally less civilian access to those bases, especially after 9/11.

For him, the more familiar young people are with veterans and the military way of life, “The more likely they are to join us,” he said.