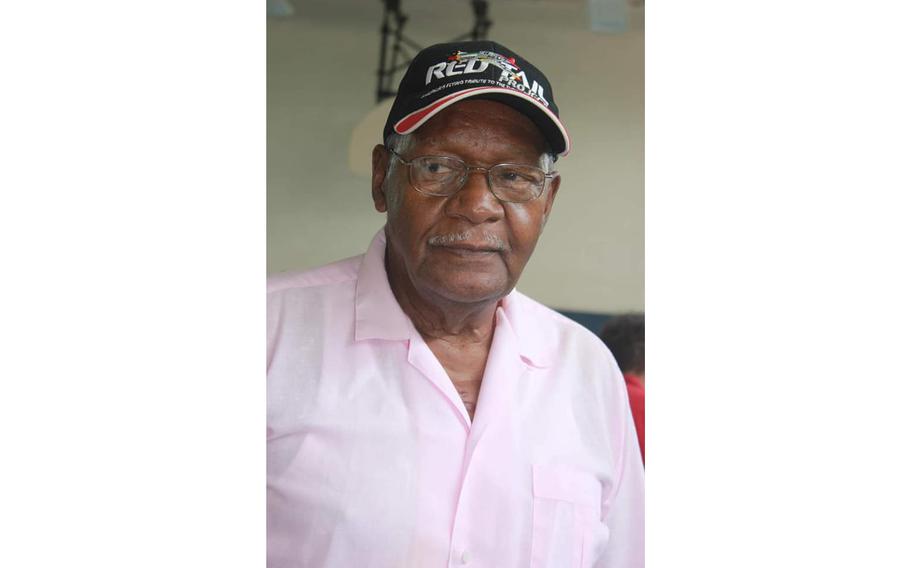 (Tribune News Service) — On Sunday, days before his 99th birthday, Tuskegee Airman William Rice of Morton died at his home.

His family said he had several health conditions, including a mild stroke, a fistula, a severe bladder infection and heart disease.

Rice was a recipient of the Congressional Gold Medal, the highest civilian recognition by Congress in 2007 for his service with the Tuskegee Airmen, flying in a P-51 Mustang as a Red Tail Fighter with the 332nd Fighter Group in Europe during World War II.

As the American armed forces were segregated during that time, the Tuskegee Airmen were the first Black military aviators. They flew escorts for bomber groups.

"We did what we had to do," Rice previously told the Daily Times. "The plane I flew the whole time I was there, No. 15, I never gave it a (the plane) a name. The tachometer didn't work. The day I turned in the plane, the tachometer started working."

One of his five daughters, Janice Rice Robinson, recalled her dad flying American flags every holiday.

"Based on what he went through — the Jim Crow laws and segregation and all that — my dad was the most patriotic person I ever met in my life," she said. "He was just a very, very patriotic dude."

And many also recalled the airman's humility and how he never bragged to anyone about his service.

Robinson said her dad never had an unkind word for anyone.

Lisa Lockley knew Rice from when he was a youngster.

"I lived two doors down from him growing up," she said. "I would describe him as a very humble and quiet man. He was quiet, he was humble, he loved jazz. He would sit out in his yard and listen to jazz."

Rice grew up in Nether Providence and dreamed of being a pilot as he saw National Guard airplanes fly over his home.

During his senior year in high school at 19 years old, he enlisted in the Army Air Corps, the forerunner of the Air Force. He completed basic training at Keesler Army Airbase in Biloxi, Miss., then was sent to Tuskegee Institute in Alabama for pre-flight training.

Rice told the Daily Times in 2012 that he never left the base in Mississippi because of the difficulty of segregation in the South at that time.

"It was different living in the North and then having to go down South," Rice recalled.

Not having the two-year college requirement for admission to the Tuskegee program, he took special curriculum to pass the written exam to qualify for primary flight training. By 1944, he had received his wings.

After combat training, Rice was sent to Italy as a member of the 332nd Fighter Group in January 1945. He would complete 34 combat missions in a P-51.

Among the missions was a flight to Berlin.

On Feb. 3, 1945, the Tuskegee Airmen escorted B-17 bombers more than 1,600 miles into Germany and back, shooting down three German jets in a single day. For this mission, the 332nd Fighter group earned a Distinguished Unit Citation.

He was discharged from the Army in 1946 with the rank of first lieutenant.

Rice received other recognition in his military career.

On March 29, 2007, then-President George W. Bush honored the Tuskegee Airmen with a salute and the Congressional Gold Medal for their service.

Although Rice was not physically able to attend the U.S. Capitol ceremony, he did receive his medal, thanks to his brother-in-law, who got it for him.

"He was having a few mobility issues," Robinson said. "He was invited to go to Washington. He decided not to go. The way he got his medal was through is brother-in-law who sent it to him."

In his hometown, in the playground at Morton borough hall, the tot lot was named after him because of his service to the United States. The area is now called, "Morton's Own Lt. William E. Rice Kids Port Tuskegee Airmen." At the bottom of the sign, it reads, "He saw the planes flying over and said, 'When I grow up, I want to fly.'"

Those close to him said he kept a collection of his Tuskegee mementos and scrapbooks of his time in the war but he was generally quiet about his experience until the 1995 release of the movie, "The Tuskegee Airmen," starring Laurence Fishburne.

"After that first movie came out, there were people in the community that knew he was a Tuskegee airman," Robinson said, including Lockley, who began to promote his service to the community.

Over time, Lockley, who would arrange interviews for him, said he was getting tired and he wanted to stop.

However, he always had time for the youth.

"He would always talk to the kids," Lockley said. "When kids would come up in the yard and (ask him) he would talk to them."

According to Lockley, Rice's story was one of 25 people featured in "The Black List" by Timothy Greenfield-Sanders and Elvis Mitchell.

The book, which became a documentary, showcased prominent Blacks, including Toni Morrison, Russell Simmons, Kareem Abul-Jabbar, the Rev. Al Sharpton and Keenen Ivory-Wayans. The book also was the basis for exhibits featuring Rice at the National Portrait Gallery of the Smithsonian Institution in Washington in 2012 and at the Brooklyn Museum in 2009.

Robinson said the family is honored by their dad.

"We were very proud of him," she said. "My dad didn't talk about it that much growing up. We really didn't realize the significance of his service growing up. My dad kept everything. We would occasionally look through his scrapbooks (of) World War II. As a child you don't think that there's something special about Negro or Black pilots."

When the 1995 movie came out, Robinson said they realized the significance of his service.

After the service, he returned to Delaware County. In 1952, after a stint with Pennsylvania Railroad, he began working at the Boeing Helicopter Division as a tool keeper. He was there 41 years until his 1993 retirement.

"He was equally as proud of his service at Boeing as he was as being a Tuskegee Airman," Robinson said. "He knew about every tool there was."

As a hobby, he built models of the planes the Tuskegee airmen flew during World War II and helicopters built by Boeing.

"My dad was wicked smart," Robinson said, of the man also known as "Mr. Woody." "He was really an intelligent guy but he wasn't nerdy intelligent. He read a lot. He knew how to fix everything. He put electrical outlets in. He was a DIY-er. He was dependable. He was supportive. He worked really hard to provide for his family. He was an all-around nice guy. He was just Mr. Dependable."

Lockley said she was grateful to have known him.

"I was like super proud to know that I knew someone that was a Tuskegee Airman," she said. "I was very proud to have known him. He really had a rich life."

Every Veterans Day, Lockley said she made certain that he had a flower arrangement or flag.

"I was trying to do more for him, just to honor him," she said.

A funeral service will be held 11 a.m. Tuesday, Dec. 6 at First Baptist Church of Morton. A viewing will be 9 to 11 a.m. at the church. Burial will be in the Rolling Green Memorial Cemetery in West Goshen Township.