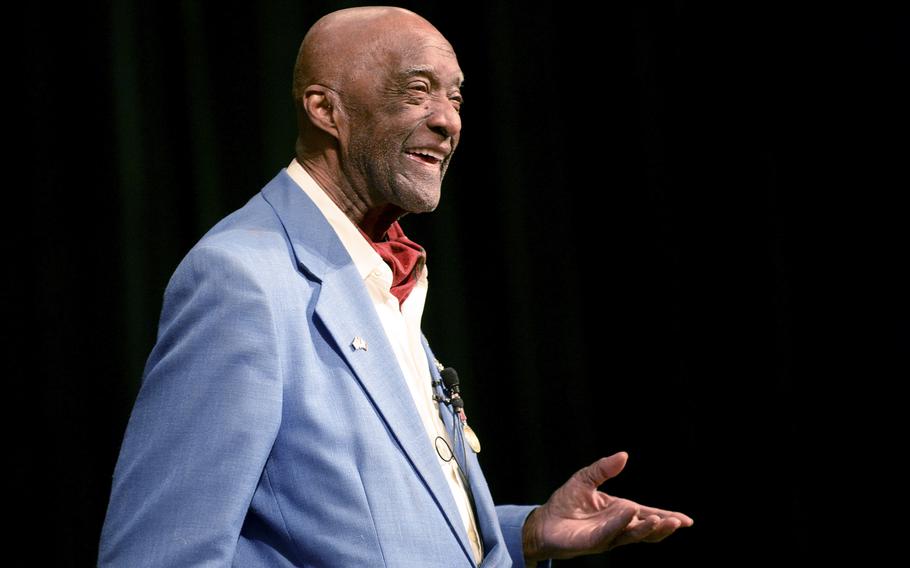 It's the motto for Boston's Ancient and Honorable Artillery Company, a patriotic organization formed in 1638 to train young officers to serve the commonwealth, and a virtue that its first Black member, retired Lt. Col. Enoch "Woody" Woodhouse II, said he wished more people would embody.

"The last two or three years, it has become more divisive because certain elements have surfaced," Woodhouse, one of "20, 25" remaining members of World War II's legendary Tuskegee Airmen, the all-Black fighter pilot unit, said on the state of race in American society.

Two recent examples came to his mind: The hardline racist messaging of neo-Nazis who protested last weekend outside Boston's Brigham and Women's Hospital and President Biden saying he will nominate a black woman to the U.S. Supreme Court.

"He should have said, 'I'm going to nominate the best person, man or woman,'" Woodhouse said.

An announcement colored by racial and gender labels applies stigma to the nominee, he said, while the "virtue signaling" benefits only Biden in a world that puts words before deeds.

Woodhouse, who turned 95 last month, experienced racism since he was born at Boston's Lying-In Hospital, now Brigham and Women's, on Jan. 14, 1927. His dad, a second-generation Methodist minister who took his son to every Harvard commencement speech to inspire a love of higher education, had tried to get young Woody admitted to Boston's Latin School but failed due to prevailing discrimination at the time.

Woodhouse graduated from Boston's English High School in 1944 and kicked off a life full of "hope, unity, and optimism," topics he still speaks on with great humor and insight on the lecture circuit and on phone calls with leaders and newsmakers all day long.

Finally landing at his current apartment building, where he spoke in a laugh-filled conversation with the Herald this week, a mere block or two from his birthplace in the Mission Hill neighborhood, represents a circle that saw him navigate around both the world and its history.

Spurred by his mother's concern over the Japanese attack on Pearl Harbor Dec. 7, 1941, Woodhouse's parents signed his enlistment papers on his 17th birthday, and he boarded a train after high school graduation for training in Texas with about 20 of his classmates. His own ride on the scheduled trip came to a stop at the St. Louis station when an "Archie Bunker-type" conductor told him to get off.

Left at the station with about $7 in his pocket and his white friends on the train passing into the distance, Woodhouse was approached by a Black porter who asked if Woodhouse had ever been south before. His response: "Yeah, I've been to New York." That told the porter all he needed to know. He gave Woody a chicken sandwich from his own kitchen — not accepting payment — and told him the train he was allowed on would be there in 9 hours.

The coal-fired train arrived at base nearly a day late, and the receiving sergeant was not impressed by the soot-covered teen who had limited ways to express what had happened with the three military-approved responses: "No, sir; Yes, sir; and No excuse, sir."

Such an inauspicious beginning would be short-lived: With Woody too young to serve in combat, Col. Benjamin Davis, Jr., the first Black commanding officer of a base, sent Woody off to finance school for him to serve as paymaster for the Tuskegee Airmen. He saw the military desegregated in 1948 and continued to serve in reserve for the newly-formed Air Force until retiring as a Lieutenant Colonel in 1997.

He went on to graduate from Yale in 1952 with what he called a B.A.A., "Before Affirmative Action" — he said degrees have been stigmatized by being perceived as not being earned on merit — and received his law degree from Boston University in 1955.

He had his own trial law practice and served, he said, as the first African American courier for the U.S. State Department, a gig that had him in Paris, London, deep behind the Iron Curtain, the Middle East and on the last flight out of Havana in 1959, from which he saw Fidel Castro wave a rifle from the control tower.

Woodhouse met his wife, Stella, who is white and a contributing factor in his concern over the divisiveness of race today, in an Albany, N.Y., snowstorm, "and I mean a blizzard," when he had her and her two friends join him in the last taxi available to the bus station. They've been married for 40 years.