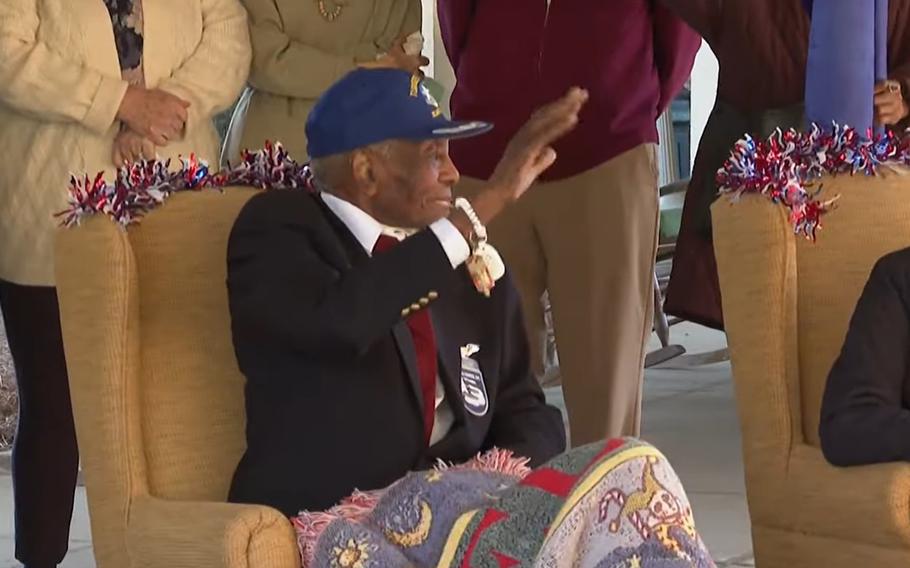 AUSTELL, Ga. (Tribune News Service) — Dr. Hillard Warren Pouncy Jr. has a lot to look back on in 100 years of living.

One of the last living Tuskegee Airmen, Pouncy reached his birthday milestone Tuesday at Presbyterian Retirement Village in Austell.

The Tuskegee Airmen were a group of nearly 15,000 African American pilots, bombardiers, navigators, instructors, mechanics and other support staff who served in the U.S. Air Force in World War II.

In the military, like most of the country, Blacks and whites were often segregated. Pouncy has reflected on how racial dynamics within the country have shifted in his 100 years.

“Things were different then, we believed in separation of the races more than we do now. I often laugh about that now, and just how different things were,” Pouncy said.

Pouncy was born Feb. 8, 1922, in Prichard, Ala., and in 1930 he, a brother and two sisters moved to Eufaula, Ala., to be raised by his grandparents. His grandparents worked in the cotton fields for most of their life, and his grandfather was born just three years after slavery ended.

“My grandfather was pretty much African,” Pouncy said.

After graduating as valedictorian from his high school in 1940, Pouncy went off to the Tuskegee Institute in Alabama on a work scholarship. There, while a student he worked on a farm, helping with machinery. Pouncy was impressed when he’d see Black cadets marching on campus and decided to join the armed forces.

“I volunteered to join the Air Force because they were letting Black guys learn to fly,” Pouncy said. “We wanted to fly and girls were interested in guys that wanted to fly.”

Pouncy initially wanted to be a pilot and went to flight school for one week before deciding to be a bombardier on a B-25.

The centenarian remembers Japan’s attack on Pearl Harbor on Dec. 7, 1941, and recalls thinking he would soon be off to the war. But he never went into combat, saying he was “lucky in that way.”

Many of his colleagues came home injured.

“One of my friends came back and his face was completely changed ... burned so bad that he was barely recognizable,” Pouncy said.

Pouncy spent his entire time as an airman stationed in Tuskegee.

Pouncy met his wife, Mattie Mae Hunter Pouncy, while at Tuskegee and married her a few years after the war. She passed away in 2007.

When asked about the racism he faced during his younger years, Pouncy noted the term wasn’t in the vocabulary as much back then.

“Racism is a fairly new word for me. We didn’t use that word when we were 12 or 13. I felt that poverty was the thing that brought that on. We figured that if we went to school, we could erase some of that.”

When then-President Franklin Roosevelt signed the G.I. Bill of Rights, he took full advantage to gain a subsidized education, calling it the “only good thing to come out of World War II.”

“They said they will buy you books, pay your tuition and help your wife and your children,” Pouncy said. “Now that was the best investment that came out of the war in my opinion.”

After the war, Pouncy took advantage of the G.I. Bill and obtained a master’s degree in chemistry and a Ph.D. from Syracuse University.

He then worked 30 years as a chemist and scientist for Union Carbide. He also added to his years of service with the National Guard.

Looking over his life, Pouncy takes pride in the path of education he was able to set for his family. His son earned a Ph.D. at the Massachusetts Institute of Technology, while a grandson is finishing up his Ph.D. at Harvard.

Pouncy’s son, Hillard Pouncy III, says he still wonders why exactly his father fought for the United States at a time when Black people were treated as second-class citizens.

“Why fight for a country that had told you you weren’t equal?,” Pouncy III said. “People like my father accepted a burden that was remarkably unfair, and the progress they made in their lifetime is to be honored.”

The elder Pouncy says he is proud to be an American, and looks back at the strides Black people have made in his lifetime with pride, citing the election of former President Barack Obama as a sign of a changed country.

“I looked up one day here was a Black man president of one of the greatest countries that has ever been on the face of the earth,” Pouncy said. “America is a great place.”

When asked whether he, now in his triple digits, has the secret to longevity, Pouncy cited his day-by-day approach.