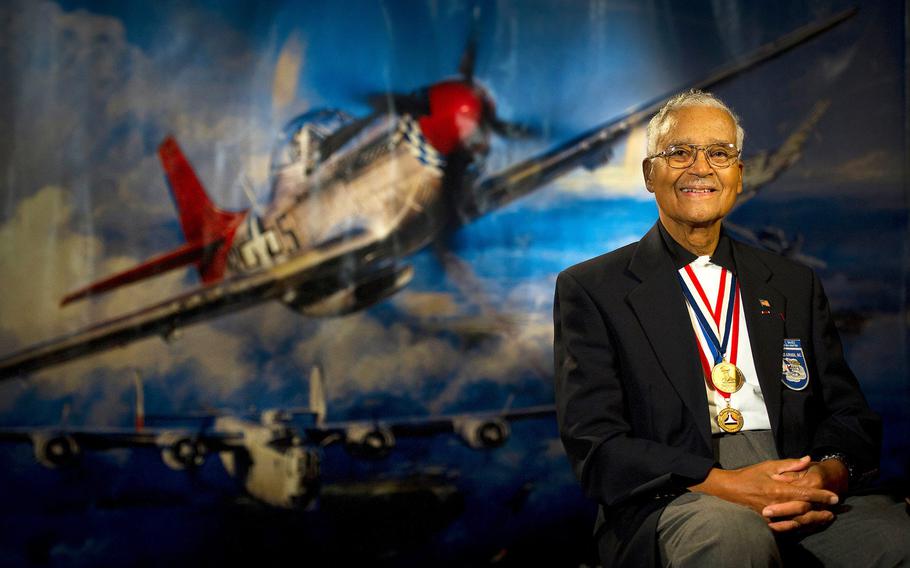 "I am saddened to share the news that one of our greatest alumni and a true national treasure, retired Air Force Brig. Gen. Charles E. McGee, passed away peacefully at the age of 102 at his home in Maryland," Russell wrote Sunday to the college community. "He lived a life of dedicated service to the U.S. Air Force, the Boy Scouts and Alpha Phi Alpha fraternity among many other organizations.

"We are proud to call him one of our own."

Joining what was then the Army Air Corps in 1942, McGee trained at Tuskegee Army Airfield and joined the first African American military aviators who would become the Tuskegee Airmen.

He flew fighter planes during World War II and the Korean and Vietnam wars, with more than 6,000 flight hours. When he retired, he held Air Force records for most combat missions with 409 and combat hours flown with 1,151.

His honors include the Legion of Merit with Oak Leaf Cluster, Bronze Star, Distinguished Flying Cross with two clusters and the French Legion of Honor.

When serving as director of Wheeler Airport in Kansas City, he earned his bachelor's degree in 1978 from Columbia College-Kansas City.

Columbia College in 2014 presented him with an honorary Doctor of Humane Letters degree. The Brig. Gen. Charles E. McGee '78 House was established on the Columbia campus in 2020 to enhance the student experience for its military and veteran community.

He was given the honorary promotion to brigadier general in December 2019, with former President Trump pinning his stars in an Oval Office ceremony on Feb. 4, 2020. He was a guest at the State of the Union later that day.

He tossed the coin at the 2020 Super Bowl along with three fellow 100-year-old World War II veterans.

"Please join me in remembering Gen. McGee's contributions to our community and college and keep his family in your thoughts and prayers," Russell wrote.