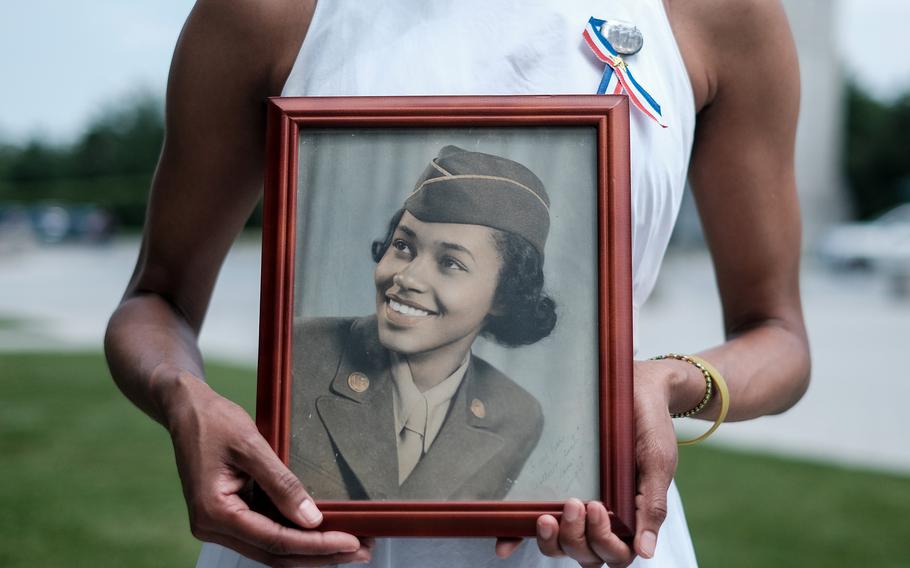 The country is at long last training a spotlight on a long-unsung World War II unit of Black women, with Congress bestowing its highest honor on them — and with a new musical on the way, too, to sing about their astonishing story.

They were the 855 members of the Women’s Army Corps’ 6888th Central Postal Directory Battalion, the only all-Black, all-female battalion sent overseas during the war. A handful, ages 98 to 102, are still alive. And though none could make it to an emotional ceremony on Wednesday at Arlington National Cemetery, dozens of their sons, daughters and grandchildren were on hand to celebrate their courage and reflect on their trailblazing achievements as women of color.

“These ladies were leaning in,” Army Brig. Gen. Hope Rampy told their assembled descendants, “before leaning in was cool.”

The event at the Military Women’s Memorial was organized to recognize the women and acknowledge their collective receipt of the Congressional Gold Medal, one of fewer than 200 that have been awarded since the inception of the nation. (The first recipient was George Washington.) Spearheaded by a pair of retired Army veterans, Col. Edna Cummings and Master Sgt. Elizabeth Helm-Fraizer, and ushered through Congress by Sen. Jerry Moran, R-Kan., and Rep. Gwen Moore, D-Wis., the legislation authorizing the medal became law on March 14.

What made the contributions of the Six Triple Eight, as it’s affectionately known, so exemplary was both the scope of the unit’s mission, and the doors of the Armed Forces it cracked open to African American soldiers and other soldiers of color. As the audience was told by Veterans Affairs Secretary Denis McDonough, it was a direct result of their success that President Harry Truman desegregated the military in 1948. As for the Six Triple Eight’s wartime logistical triumph, the 6888th, dispatched to Britain under the command of Col. Charity Adams in 1945, managed to clear a massive backlog in undelivered mail to soldiers in the European theater of operations. Solving that severe morale issue and getting the letters and packages out was supposed to be an arduous task stretching six months at the least.

They did it in three.

“Only four women are buried at Normandy, and three are from the Six Triple Eight,” Cummings said during the ceremony, referring to the fact that the unit was subsequently sent to France as the war ended to clear another monumental postal logjam. They again completed it in record time.

It has taken decades for a widespread sharing of their story — indeed, Phyllis Wilson, president of the Military Women’s Memorial and a retired Army chief warrant officer, said she spent 37 years in the military and “never knew” of the 6888th’s heroics. But a recent documentary by filmmaker James Theres, “SixTripleEight,” helped raise the battalion’s profile. The Congressional Gold Medal, whose honorees include Thomas Edison, Rosa Parks, Bob Hope, Jonas Salk, the Native American Code Talkers and the Tuskegee Airmen, is another important step in cementing the 6888th’s place in history.

A new musical-in-progress isn’t going to hurt, either. Actor Blair Underwood, executive producer of “Six Triple Eight — The Musical,” introduced the creative team before a video of a song from the show was played. Underwood is the son himself of a retired Army colonel, Frank E. Underwood Sr., who also attended the ceremony.

“A moment to a movement to a movie to a musical!” Blair Underwood recounted. “Like many people, I wasn’t aware of the Six Triple Eight until very recently. I said, ‘This is a phenomenal story the world should know.’“

This may very well have been the first time the initial peek at a commercial musical has occurred on the country’s most hallowed ground for the Armed Forces. (Fourteen members of the 6888th are interred there.) The musical’s book writer, Morgan J. Smart, songwriter Ronvé O’Daniel and orchestrator Jevares C. Myrick took the stage to unveil the video of the aspirational number, “All I Need,” four actors playing future members of the 6888th who sing about doing great things.

“There’s gotta be more than reading, there’s more to life than church,” sang actress Jasmin Richardson (now on Broadway in “The Book of Mormon”), playing Charity Adams. “More than wishing to spread my wings while I’m waiting on this perch.”

Among the relatives who packed the memorial auditorium wearing red, white and blue ribbons was Adams’s son, Stanley Earley, who seemed a bit taken aback by the attention. “My mother was wonderful,” he declared simply after the ceremony, as other audience members besieged Blair Underwood for selfies.

Families came to Arlington from across the country for the nearly two-hour proceeding, during which other speakers, such as Elwood L. Robinson, chancellor of Winston-Salem State University in North Carolina, highlighted some of the women’s achievements after they returned stateside. One of them, Elizabeth Barker Johnson, was the first person to graduate from what was then called Winston-Salem Teachers College, under the first G.I. Bill.

“Their spirit elevates our humanity,” Robinson said, “as they take their rightful place in the annals of American history.”

The daughters, son, grandchildren and cousin of 6888th member Annie B. Knight of Washington, D.C., descended en masse on Arlington Cemetery to share in the joyful moment. Wearing matching yellow T-shirts emblazoned with a vintage photo of Knight in uniform, the family members proudly enumerated their own accomplishments, inspired in part by the woman on their shirts: They are doctors, college deans, American Civil Liberties Union staffers, Army officers.

“She always made us feel as a woman you could be whatever you wanted to be,” said one of Knight’s daughters, Karen Jordan, who holds both a medical degree and a PhD. Among the contingent was her sister Carmen Jordan-Cox and brother Harold.

They expressed their delight at the song from “Six Triple Eight — The Musical,” which was conceived by New York publicist Holly Garman, in partnership with colleague Joe Trentacosta, after she read an article about the battalion. The project gained important psychic momentum for the New York-based musical writers as a result of Wednesday’s celebration. Miming the act of typing furiously, Morgan Smart said, laughing: “Our train ride back will be … “

The show has already established an avid fan base. “Let’s find a way to bring it to Washington, D.C.!” Phyllis Wilson declared. “But I’ll go to New York City for it!”