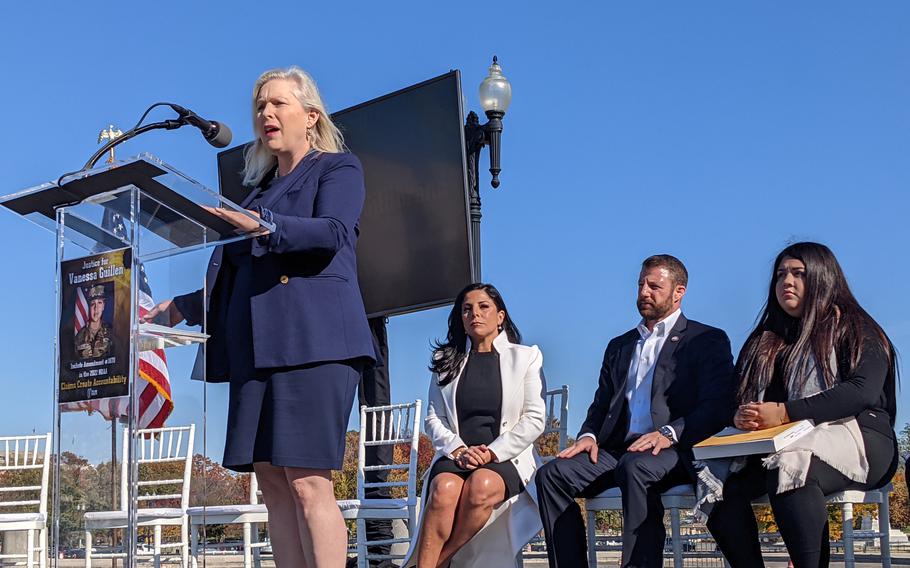 The new reforms, which also create randomized jury selection and add three new crimes to the prosecutors’ jurisdiction, build upon military justice changes enacted one year ago as part of the fiscal 2022 National Defense Authorization Act, an annual bill that outlines defense priorities and spending. Last year’s legislation formed new offices in each service branch to make decisions on when to prosecute a service member charged with one of 11 felonies, a task previously left to the commander of the accused.

“While changes in last year's NDAA did give some powers to [new military prosecutors], commanders still had a significant prosecutorial and judicial power making the system susceptible to bias and undermining trust,” said Sen. Kirsten Gillibrand, D-N.Y., who drafted the legislation that was ultimately added as an amendment to this year’s NDAA.

The House is set to take up the bill this week, followed by a vote in the Senate. If approved, the legislation will move to the White House for President Joe Biden’s signature.

“This year's NDAA is the culmination of nearly a decade of work with advocates, survivors and veterans groups. It finally strips commanders of their remaining judicial and prosecutorial powers for covered offenses and gives them to trained professional military prosecutors,” she said Wednesday during a news conference.

Gillibrand has long been a vocal proponent of overhauling the military justice system, citing its failure to get sexual assault and harassment in the armed forces under control. Despite increasing scrutiny and millions of dollars spent on prevention efforts, the numbers of assaults rose from about 2,500 in fiscal 2010 to about 6,200 in fiscal 2019, according to a March 2021 Government Accountability Office report on military sexual assault.

The death of Army Spc. Vanessa Guillen in 2020 was a catalyst for gaining recent support for military justice reform. Guillen, who went missing on April 22, 2020, was believed to have been killed at Fort Hood, Texas, by a fellow soldier, who then buried her body off the base. Army-led and independent investigations found she was sexually harassed before her death, but she feared reporting it to her chain of command.

Only one-third of sexual assault victims are willing to come forward and report their crimes, which shows a lack of trust in the system, Gillibrand said. About 44% of victims indicated they would be more likely to come forward with a prosecutor in charge of decision-making instead of a commander.

“Taking commanders out of the role of overseeing and influencing these cases will build more credibility for survivors and more credibility in the special trial counsel. It just creates the perception that justice is possible and so hopefully more cases come forward and more cases end in conviction,” Gillibrand said.

Congress mandated in 2022 that the decision on whether to prosecute service members accused of 11 felony crimes move to an Office of Special Trial Counsel housed within each military service branch. The military attorney leading each office reports to the civilian secretary of the service.

The fiscal 2023 NDAA would add three new crimes to the jurisdiction of the new prosecutors: death or injury of an unborn child and mailing obscene matter, as well as sexual harassment, which was added under an amendment from Rep. Jackie Speier, D-Calif.

She also has spent the last decade working on military justice reform and worked last year to include sexual harassment as a stand-alone crime under the Uniform Code of Military Justice.

“Shockingly, these extremely complex and critical sexual harassment cases were not taken out of the chain of command last year,” Speier said in a statement issued Wednesday. “This year’s NDAA agreement rights that egregious wrong and will finally ensure that this gateway crime receives the respect and resources it requires.”

The bill also removes all residual prosecutorial duties and other judicial functions of the convening authority from military commanders for these crimes. This includes granting clemency, convening preliminary hearings and ordering depositions.

It also eliminates the announcement of the commander’s name as the convening authority at trial and adds reporting requirements to the new legal office beginning in 2025. Commanders will remain in control over crimes that impact good order and discipline within a unit, such as failure to report or follow orders, disrespect and larceny offenses.

“These changes will go a long way to increasing the confidence that survivors have, whether they're survivors of domestic violence, sexual harassment, sexual assault, or their families of the loved ones who have been murdered to come forward and to feel like they're going to get justice,” said retired Col. Don Christensen, president of Protect Our Defenders, a human rights group that has advocated on behalf of service members for justice reforms.

“This is something that affects both those accused of crimes and accusers, and the confidence that military members have in the justice system is critical to our ability to have a lethal fighting force. These changes will go a long way to doing that,” he said during Gillibrand’s news conference.

The services each nominated to the Senate last month a one-star flag officer to lead the new legal offices. They’ve also begun certifying attorneys to work in the offices. Gillibrand said she’s pleased with the progress that’s been made.

The offices should begin to take shape by June, so the attorneys assigned to them are ready by the mandated operational deadline of December 2023, she said.

After nearly 10 years working toward this goal, Gillibrand said she’s ready to see how the reforms take shape. Congress has enacted more than 250 smaller reforms during that time, and some still haven’t fully developed.

“The most important thing for me to do is just oversight [and] accountability to make sure they're doing the things they promised to do. If they're not, we have to just keep pushing on them,” she said. “We have good reforms in place. I want to see if they work, and if they don't, we'll amend the system.”