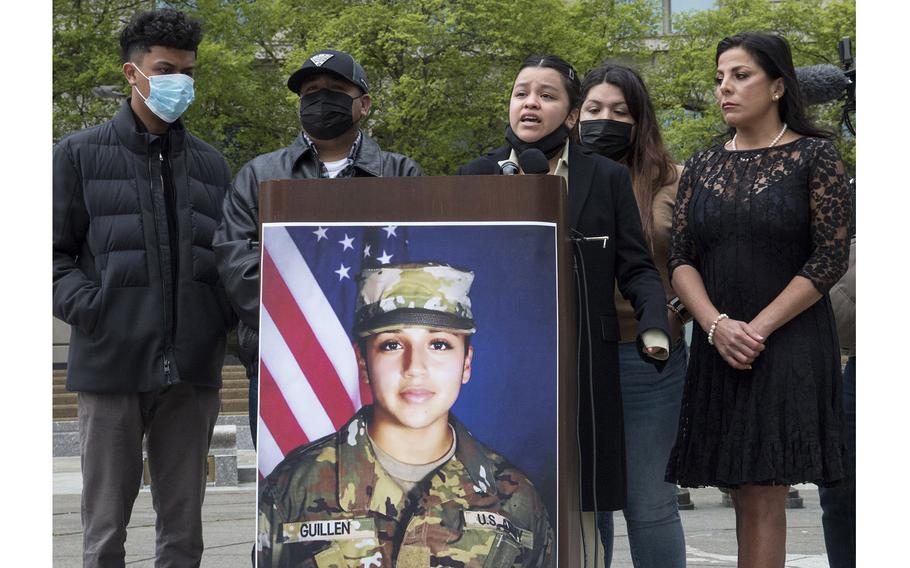 AUSTIN, Texas — Cecily Aguilar, the only person charged in connection to the killing of Army Spc. Vanessa Guillen at Fort Hood, pleaded guilty Tuesday in a federal courtroom to helping her boyfriend dispose of the soldier’s body in April 2020.

Aguilar, 24, pleaded guilty to accessory to murder after the fact and three counts of making a false statement, according to the U.S. Attorney’s Office for the Western District of Texas.

“Cecily Aguilar’s guilty plea today was another step on the long path toward justice for Vanessa, my client, and her courageous family,” said Natalie Khawam, an attorney for the Guillen family. “I will never stop fighting for my clients and will continue to seek and demand justice for victims and their families until it’s achieved.”

Guillen went missing from Fort Hood, Texas, on April 22, 2020, while working in an arms room with the 3rd Cavalry Regiment’s engineer squadron. Her remains were found June 30 alongside a river about 30 miles from the base.

Spc. Aaron Robinson, another soldier in Guillen’s squadron, killed her with a hammer, then moved her body, according to court documents. Robinson shot himself dead July 1 when approached by civilian law enforcement in Killeen, the town just outside Fort Hood.

Investigators have never released a motive in the killing.

Aguilar, who has been in federal custody since Guillen’s remains were found, was indicted on one count of conspiracy to tamper with evidence and two counts of tampering with evidence.

Mayra Guillen, Vanessa Guillen’s sister, attended the hearing in Waco and said during a news conference afterward that the experience was hard on the family.

“We were very taken aback by her decision today. There’s still a lot of mixed emotions,” Mayra Guillen said.

Aguilar was set to go to trial in January but will now be scheduled for sentencing. She is facing a maximum of 30 years in prison plus three years of supervised release and a $1 million fine.

“I’m glad that we are going to have an opportunity to speak in front of her and the judge, and, of course, hear what she has to say,” Mayra Guillen said.