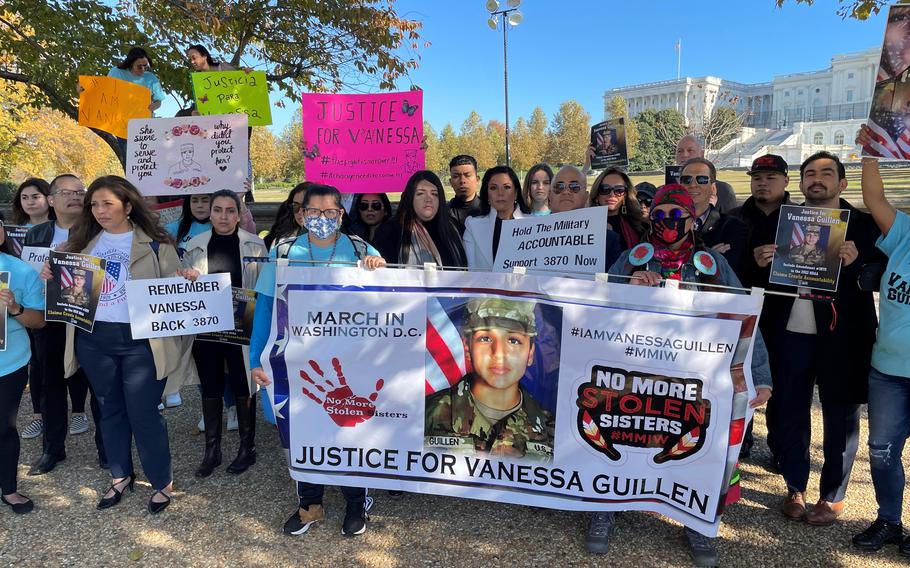 Supporters of military justice reform marched last year in Washington to call for justice for Army Spc. Vanessa Guillen, who was killed at Fort Hood, Texas, in April 2020. The group called on Congress to pass legislation that would create an independent prosecutor to decide whether or not cases of sexual assault and harassment should be tried. (Photo provided by Natalie Khawam )

Psaki said the order was created in honor of Spc. Vanessa Guillen, a 20-year-old small arms repairer who was killed by another soldier in 2020 after being sexually harassed.

“This historic addition to the [Uniform Code of Military Justice] honors the memory of Army Spc. Vanessa Guillen, whose experience with severe sexual harassment was followed by a brutal murder, catalyzing national attention to the scourge of sexual violence in our military,” she said.

Guillen’s family celebrated Biden’s order Wednesday and they said it contained some provisions included in the I Am Vanessa Guillen Act, which was introduced in Congress to change how military sexual assault is prosecuted.

“This is a very emotional and a very proud moment for my family,” Guillen’s sister Mayra said in a written statement.

Some of the measures in the I Am Vanessa Guillen Act were already enacted by Congress through the 2022 National Defense Authorization Act. Through the NDAA, which sets the Defense Department’s annual budget and includes a slew of defense-related policies, Congress approved significant changes in December to how the military prosecutes major crimes, including rape and sexual assault.

Under the new law, commanders will be removed from prosecution decisions for those cases. Instead, each military branch will establish a new Office of Special Trial, independent of the chain of command, to oversee them.

The new law also addresses sexual harassment. Lawmakers moved to make sexual harassment a crime under the Uniform Code of Military Justice. The law states allegations of harassment must be reviewed by independent investigators. How the executive order differs from the new law was unclear Wednesday afternoon.

“The Biden-Harris administration thanks Congress for its bipartisan commitment to pass monumental reform to the military justice system,” Psaki said Wednesday when discussing the order.

The order hadn’t been publicly released late Wednesday afternoon, and other details of its contents, such as the potential penalties for sexual harassment and domestic violence, were not known.