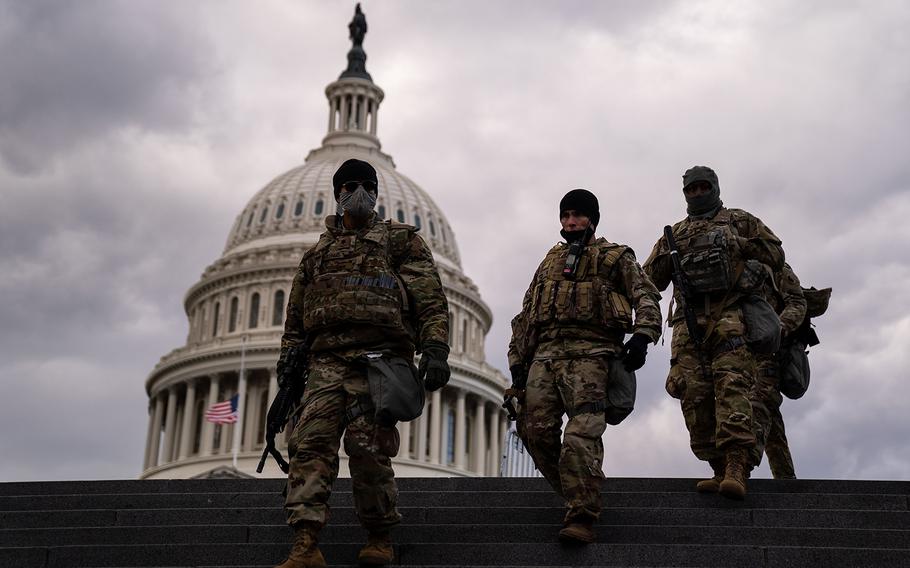 National Guard Troops from Virginia walk down the stairs toward the Capitol Visitors Center on Jan. 18, 2021 in Washington, DC. (Kent Nishimura/Los Angeles Times/TNS)

The Senate Armed Services Committee report accompanying its fiscal 2023 National Defense Authorization Act calls on the Pentagon to “immediately” halt the counter-extremism programs. The committee approved the bill in June, but the legislative text and the report weren’t made public until this week.

The language has no legal effect, but its adoption shows the political strength of conservative arguments that even modest amounts of training to equip military personnel to resist extremist recruiting is a distraction from military preparedness.

Every Democrat on the Senate committee voted against the provision, and every Republican voted for it. Sen. Angus King, an independent from Maine who caucuses with Democrats, sided with the GOP on this vote, giving it a 14-12 majority.

King has not commented on his vote in response to requests from CQ Roll Call.

Democrats said in written replies to queries this week that they would push to make sure the final NDAA clearly supports counter-extremism initiatives in the military.

“Congress has a responsibility to prevent extremism in the armed services, and we should not be hampering DOD’s efforts to root out and prevent extremist activity in the military,” said Sen. Kirsten Gillibrand, D-N.Y., who chairs the Armed Services Personnel Subcommittee.

Virginia Democratic Sen. Tim Kaine, another senior member of the Armed Services Committee, also promised not to let up on the effort.

“The rise of extremism is a threat to the safety of our communities, including our military communities, who sacrifice so much in defense of our freedoms,” Kaine said. “I’m going to work with my colleagues in the coming months to ensure we continue to take action to address these threats.”

On the House Armed Services Committee, Maryland Democratic Rep. Anthony G. Brown has been one of the most vocal advocates of Defense Department work to counter extremist narratives. Brown said he intends to redouble such efforts in the remainder of this year, his last in Congress.

“Our military cannot become a training ground for extremist individuals and organizations seeking to use the skills gained in our armed forces to attack our democracy,” said Brown, who is running for Maryland attorney general. “The alarm bells have been ringing for years, which is why this move by the Senate to halt counter-extremism programs within the Department of Defense is so misguided.”

The University of Maryland National Consortium for the Study of Terrorism and Responses to Terrorism, or START, has found that 17 percent of those charged with crimes during the attack on the Capitol on Jan. 6, 2021, had military ties, and most of those were veterans, according to Bill Braniff, START’S director.

In the past 31 years, domestic violent extremist attacks by veterans and active-duty service members have killed more than 300 people and injured nearly 2,000 more, House Veterans’ Affairs Chairman Mark Takano, D-Calif., said at a March hearing of his committee.

At issue are not just white supremacist or right-wing zealots but also gangs, left-wing groups, jihadists and others.

As the Iraq and Afghanistan wars drew down, extremist groups sought to recruit military personnel and veterans to their causes, experts say.

The groups’ efforts appear to have been somewhat successful.

“The number of individuals with military service backgrounds arrested for an extremist crime over the past 10 years is four times higher than the number arrested over the decade prior,” said Braniff.

For more than half a century, the Pentagon has had guidance barring certain extremist activities. These include the advocacy of, or participation in, certain actions, including those that are violent or that seek to overthrow the government, commit terrorism or deny fellow citizens their rights.

Defense Secretary Lloyd J. Austin III has prioritized countering extremism. Earlier this year, he ordered a departmentwide “stand down” to allow uniformed leaders to discuss with troops matters such as which activities are barred and how to report them.

And Austin set up a working group that made recommendations to clarify prohibitions and update rules and procedures pertaining to matters such as which activities are barred and the characteristics of extremist groups, as well as how to brief new recruits and those leaving the service on what to watch for.

Gen. Mark Milley, the chairman of the Joint Chiefs of Staff, told GOP senators in writing in February that the cost to the military of the stand down was $535,000. The Defense Department’s fiscal 2022 budget was just short of $756 billion.

Each service member spent, on average, about two hours in the sessions, Milley wrote.

The Senate Armed Services Committee report said, in effect, that counterextremism programs are not worth that much time and money, which they have depicted as enormous, because extremist service members are few and far between. Alaska Republican Dan Sullivan offered the amendment containing the language.

In a February statement, Sullivan and 11 other Republican senators referred to the counter-extremism initiatives as “a partisan political agenda.” And in a June statement about the NDAA, Sullivan cited the extremism language as an example of how the bill “pushes back on the ‘woke’ agenda being pushed on the military by the Biden administration.”

Sen. James M. Inhofe of Oklahoma, the committee’s top Republican, told CQ Roll Call via email this week he opposes extremism but said the Pentagon needs to balance “the size of the problem with the investment we make in dealing with it.”

There is no disagreement between Republicans and Democrats over the fact that extremists represent an infinitesimal percentage of the armed forces — 0.005 percent, according to Pentagon figures.

However, to most Democrats and many experts on extremism, even a small number can do a great deal of damage — to morale inside the military and to the public’s perception of the services as politically neutral institutions that protect all Americans equally and obey the Constitution.

“We believe only a very few violate this oath by participating in extremist activities, but even the actions of a few can have an outsized impact on unit cohesion, morale and readiness – and the physical harm some of these activities can engender can undermine the safety of our people,” Austin wrote in a December 2021 memo.

Brown of the House Armed Services Committee said the Pentagon needs to do even more to address the issue, not less.

“I strongly believe that we can and must do more to not only recognize this threat but move forward with substantive provisions to commit robust and enduring attention to countering extremism in the armed forces,” Brown said. “This is about protecting our national security and the values our military upholds.”