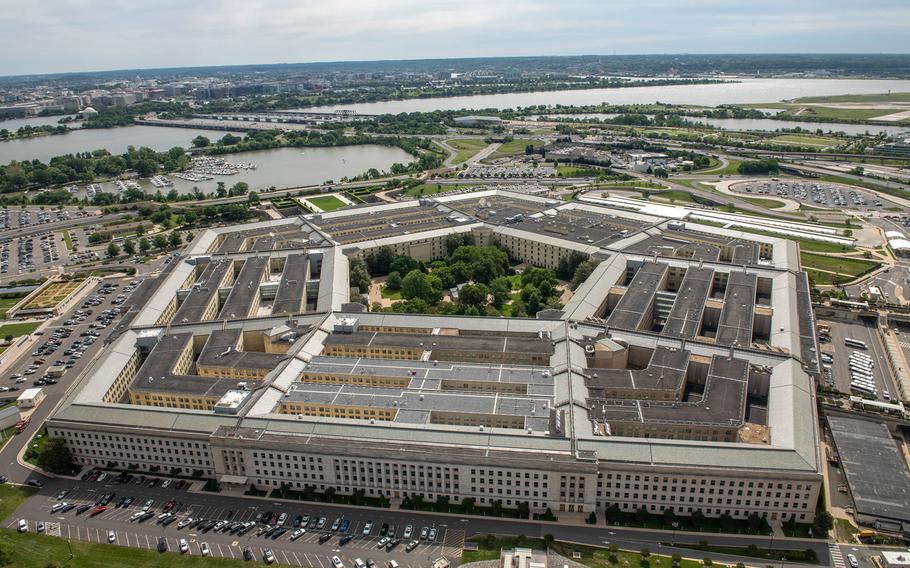 The Senate Armed Services Committee has called on the Defense Department to halt its programs to prevent and root out extremism in the ranks. (Brittany Chase/Department of Defense)

WASHINGTON (Tribune News Service) — The Senate Armed Services Committee has called on the Defense Department to halt its programs to prevent and root out extremism in the ranks.

The report accompanying the Senate’s National Defense Authorization Act, which was made public late Monday, states the committee’s view that “spending additional time and resources to combat exceptionally rare instances of extremism in the military is an inappropriate use of taxpayer funds, and should be discontinued by the Department of Defense immediately.”

The language has not previously been reported in the press. While not legally binding on the Pentagon, it appears to send a signal of congressional opposition to efforts to counter extremist narratives in the military — an initiative that was fueled largely by the fact that dozens of people charged with ransacking the Capitol on Jan. 6 were former or current service personnel, or about one in 10.

While the Senate report language suggests the committee as a whole supports halting counter-extremism training and analysis, the same document reveals that the committee approved including that section of the report by only the narrowest of margins: 14-12.

Every Republican on the committee voted for the motion, and every Democrat voted against it. Maine Independent Sen. Angus King’s vote in favor of the language tipped the balance in the GOP’s favor.

King did not immediately respond to a request for comment.

Some military veterans and other experts who study extremism among veterans and service members were dismayed when told about the Senate language.

“What is the impact on morale, good order and discipline, and ultimately combat effectiveness, if the men and women in our incredibly diverse and all-volunteer military believe that the Department of Defense doesn’t have their backs when it comes to white supremacy, support for jihadism, misogynist extremism, or anti-LGBTQ+ extremism?” said Bill Braniff, an Army veteran and director of the University of Maryland’s National Consortium for the Study of Terrorism and Responses to Terrorism, or START, via email.

“Who will raise their right hand to join that military? And what are the implications for civilian control of the military if the military is not responsible for policing anti-government extremism within the ranks?”

It is far from certain that the final NDAA that Congress sends to President Joe Biden’s desk will include the language, as solid Democratic opposition in both chambers could result in deleting or altering it during bicameral negotiations in the coming weeks.

Regardless, the extraordinary expression of opposition to even minor efforts to root out extremism from the armed services represents the latest sign of an ongoing partisan row over a reckoning with race in America.

Republicans have systematically depicted even relatively modest efforts to talk about extremism in the military and screen out potentially dangerous recruits as attempts to police thought — efforts, some say, that are stacked against conservatives and that end up tarnishing the military’s reputation. In these critiques, counter-extremism is often lumped in with diversity, equity and inclusion initiatives under the umbrella term, “wokeness.” These initiatives, the GOP argument goes, are diverting resources from military readiness.

House Armed Services Committee Republicans, for example, failed repeatedly last month to secure support on that Democratic-majority panel for amendments to its NDAA that would block Pentagon efforts to counter extremism and promote diversity.

Some on the left, meanwhile, have falsely represented the problem of extremism as driven largely by military personnel and veterans. The truth appears to be that while military-connected people are a small percentage of those convicted of extremism, their numbers grew after violent groups targeted recruitment efforts at veterans returning from Afghanistan and Iraq, Braniff and other experts say.

The impact of these recruits in the extremist groups — and the effect of their actions on the military and on the community — are magnified far beyond their numbers, the experts said.

After the Jan. 6, 2021, attack on the Capitol, the Pentagon placed a major focus on countering extremism. One month afterward, Defense Secretary Lloyd J. Austin III ordered U.S. military leaders to take time in the subsequent two months to discuss the issue with troops.

In April, Austin set up a Countering Extremist Activity Working Group to tackle the issue. The group reported in December 2021 that it had found 100 cases of extremism in a total military force of over 2 million people — or .005%.

In February of this year, Army Gen. Mark Milley, chairman of the Joint Chiefs, wrote to senators that the Pentagon had spent at least $500,000 dealing with the issue and that each service member had spent an average of two hours per year discussing it.

“The committee believes that the vast majority of service members serve with honor and distinction, and that the narrative surrounding systemic extremism in the military besmirches the men and women in uniform,” the new Senate report said. “The committee believes that when extremist activity does in fact occur that it must be dealt with swiftly and appropriately; however, the case incident rate does not warrant a Department-wide effort on the issue.”

James M. Inhofe of Oklahoma, the top Republican on the committee, told CQ Roll Call by email that extremists “have no place in our military,” but added: “We need to balance the size of the problem with the investment we make in dealing with it.”

A Pentagon spokeswoman declined to comment, indicating the department does not make statements about pending legislation.

The Pentagon working group’s December 2021 report did not just say that extremism is rare. It also said that “even the actions of a few can have an outsized impact on unit cohesion, morale and readiness.”

That is the conclusion of Braniff’s research: Extremism among veterans or currently serving military personnel hurts the military’s image, not efforts to discuss the issue in the services.

Moreover, when people with military ties join extremist groups, they lend an air of bravado to those organizations, helping burnish their bona fides, Braniff and other experts say.

Of Americans convicted of extremist crimes in the last three decades, the University of Maryland START center found that the portion with military ties is just 12 percent.

However, the number of convicted extremists with military connections in those years totaled 461 people. And in the last several years their numbers have grown, even when the Jan. 6 rioters who served in the military are excluded, the START analysts reported earlier this year.

In the last decade alone, an annual average of 24 Americans with military connections were convicted of a crime of violent extremism — not many, but still four times as many as in the previous decade.

Even a small number of cases can be damaging and deserve attention, just as the small number of spies in the ranks should draw outsized focus, said Joe Plenzler, a Marine Corps veteran and board member of We the Veterans, a group dedicated to fighting extremism and misinformation among veterans and military families.

“Espionage cases are rare but exceptionally damaging to our national security — just like extremism in the ranks,” Plenzler said via email. “The price of freedom is eternal vigilance, and leadership at every level must take care to identify and remove extremists from the military.”

At a House Veterans’ Affairs Committee hearing in April, Chairman Mark Takano, D-Calif., documented how deadly even a few extremists with military training can be.

“From 1990 through 2021, domestic violent extremist attacks by veterans and active-duty service members killed more than 300 people and injured nearly 2,000 more,” Takano said. “This includes the 1995 bombing of the Alfred P. Murrah Federal Building in Oklahoma City as well as mass shootings at a Sikh Temple in Oak Creek, Wis., outside a Jewish community center in Overland Park, Kansas, and inside a yoga studio in Tallahassee, Fla.”

As for the average two hours per year that each servicemember has spent since Jan. 6 discussing extremism, Braniff said: “Taking two hours per year to set high standards about valuing the men and women that we will go to war with, and the Constitution that we swore to defend, is not too much to ask of a military that enforces grooming standards about the length of one’s hair.”