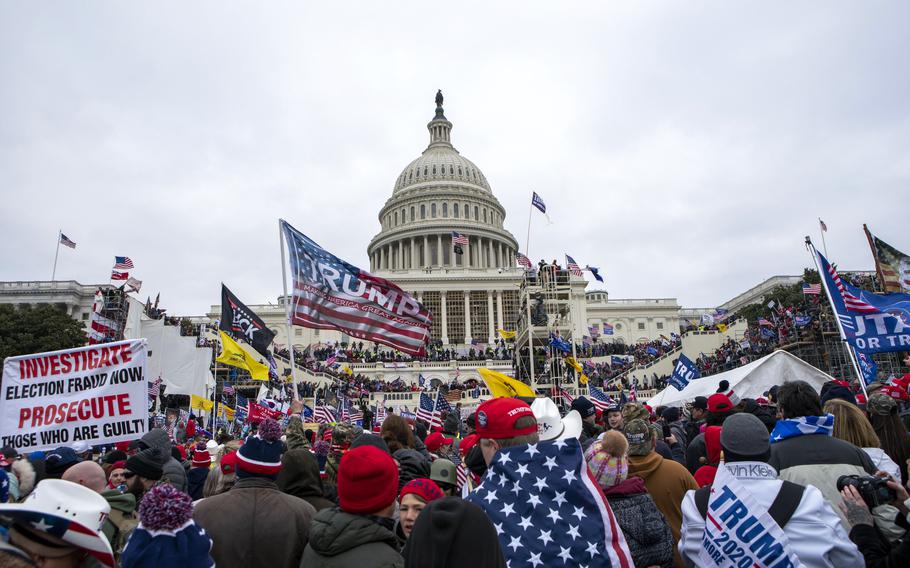 Rioters supporting then-President Donald Trump rally at the U.S. Capitol in Washington on Jan. 6, 2021. The Defense Department inspector general on Jan. 3 announced the independent auditing organization will launch a probe this month of the U.S. military’s efforts to screen recruits for any past extremist or other banned behaviors. The inspector general’s probe comes amid increased scrutiny over the military links among some extremists, including dozens of veterans and a few current members of the armed forces who were charged with crimes related to the Jan. 6 attack. (Jose Luis Magana/AP)

The Defense Department inspector general will launch a probe this month of the U.S. military’s efforts to screen recruits for any past extremist or other banned behaviors, the independent auditing organization announced.

“The objective of this audit is to determine whether military service recruiting organizations screened applicants for supremacist, extremist, and criminal gang behavior, according to DOD and military service policies and procedures,” Richard B. Vasquez, a DOD assistant inspector general, wrote in a brief Jan. 3 memorandum announcing the new audit. “We may revise the objective as the audit proceeds, and we will also consider suggestions from management for additional or revised objectives.”

The audit will at least initially start at the highest levels at the Pentagon, Vasquez noted in his memo. The Pentagon’s personnel and readiness office and the Army, Navy and Air Force departments were instructed to provide points of contact for the audit by this week.

The new audit is separate from ongoing work on extremism issues within the Pentagon, which were ordered early last year as a top priority for Defense Secretary Lloyd Austin. The Defense Department last month issued new guidance on banned extremist activity, including announcing an effort to better standardize efforts across the military services to root out recruits with extremist ties.

The inspector general’s recruiting-focused probe comes amid increased scrutiny over the military links among some extremists, including dozens of veterans and a few current members of the armed forces who were charged with crimes related to the Jan. 6, 2021, attack on the U.S. Capitol by some supporters of then-President Donald Trump. The Pentagon estimated last month that less than 100 active-duty service members last year participated in activity banned under Defense Department policies on extremism.

The IG audit will be led by the organization’s newest component — its Diversity and Inclusion and Extremism in the Military office, founded last year. That office is responsible for oversight of the Pentagon’s policies related to extremism, according to the DOD inspector general’s website.

Some lawmakers have asked the Pentagon to increase its scrutiny of potential recruits. Among them is Rep. Jackie Speier, D-Calif., who serves on the House Armed Services Committee. She wrote a letter last year to Austin and President Joe Biden imploring the Pentagon to scrutinize all military recruits' social media activity.

However, Pentagon officials have routinely said such an effort would be difficult if not impossible. The department does not have the manpower within its recruiting organizations to dedicate to searching through every recruits' entire social media history, several officials have said. Anonymous accounts also make it difficult to track the online behaviors of every potential member of the military.

Every year, some 500,000 people apply to join the military, of whom about 200,000 enter the services, according to Pentagon data. Military recruiters now ask recruits about current or past extremist behaviors in screening questionnaires and interviews prior to entering the military. Recruits are also checked for tattoos associated with extremist groups or criminal gangs, according to Pentagon policy.