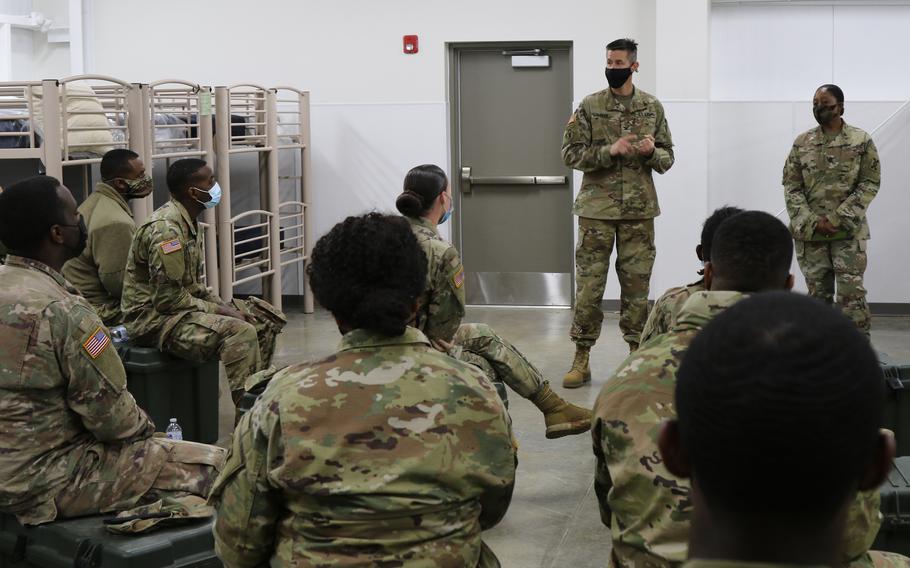 WASHINGTON — The military branches reported nearly 300 allegations of extremism among troops between Jan. 1 and Sept. 30, though the Pentagon has yet to establish congressionally mandated reporting and tracking standards, according to a Defense Department inspector general report released Thursday.

There were 137 allegations in the Air Force, 81 in the Army, 44 in the Navy and 32 in the Marine Corps, according to the report. All of them triggered investigations, except 13 in the Navy that did not require further inquiry.

After completing investigations, the Air Force took action in 37 cases, the Army in 18 cases, Navy referred 27 for punishment — including one for prosecution — and the Marine Corps took action in 10 cases, according to the report.

Extremism reporting is required by the 2021 National Defense Authorization Act, which sets the Defense Department’s annual budget. It also required the Pentagon to establish oversight policies, processes and ways to report extremism in the ranks.

The move came after a year of racial turmoil over police killings of unarmed Black people and domestic extremism that came to a head when a large mob of former President Donald Trump’s supporters stormed the Capitol on Jan. 6. Five people died in the chaos and more than 700 people have been arrested for breaching the building that day, according to the federal court of the District of Columbia.

In April, Defense Secretary Lloyd Austin established the Defense Department’s Countering Extremism Working Group to oversee the implementation of the NDAA extremism requirements and ordered the undersecretary of defense for personnel and readiness and DOD general counsel to redefine the department’s definition of prohibited extremist activities.

The working group, led by Bishop Garrison, Austin’s senior adviser for human capital and diversity, equity and inclusion, has yet to release its report, which was originally due in July. The report is expected to list and provide updates on the group’s efforts.

Without a Pentagon definition of extremism or extremist activities, the services “generally reported their data using the standardized terminology that the Federal Bureau of Investigation and the U.S. Department of Homeland Security use to describe acts of domestic terrorism,” according to the report. “The terms include racially motivated violent extremist, anti-government/anti-authority extremism, animal rights and environmental extremism and abortion extremism.

Using these definitions as a guide, the 294 allegations in the military services included 70 instances of “racially motivated violent extremism,” 73 reports of “anti-government/anti-authority extremism,” 102 reports of “domestic violence extremism participation,” 24 allegations of “criminal gang activity/affiliation,” 13 reports of “violating service standards, political involvement, disobeying an order, reprisal and restriction,” 10 reports of “trespassing at the U.S. Capitol,” and two reports of “contempt toward [a] public figure.”

However, the validity of the data is unclear, according to the report. Nearly a year after the requirement became law, the Pentagon has failed to establish standard policies for the military branches to track and report instances of extremism, which has caused data collection across the services to be inconsistent.

“For example, the Navy did not track disciplinary action for participation in extremist organizations and activities,” according to the report. “In addition, the Department of the Navy and the Department of the Air Force stated that they would update their policies once they have reviewed the relevant Office of the Secretary of Defense–level policies.”

The report’s authors urged the Pentagon to complete its NDAA-required tasks to ensure accurate data.

“Until the DOD establishes DOD-wide policy for tracking and reporting allegations of prohibited activities, the DOD will continue to have inconsistent tracking of disciplinary actions for participation in extremist organizations and activities, problems identifying and collecting data from multiple, decentralized systems, and difficulty validating the accuracy of the data,” according to the report.

The authors also said they anticipate further inspector general projects in 2022 that will analyze “additional aspects” of the Pentagon’s policies addressing extremist behavior and prohibited activities.