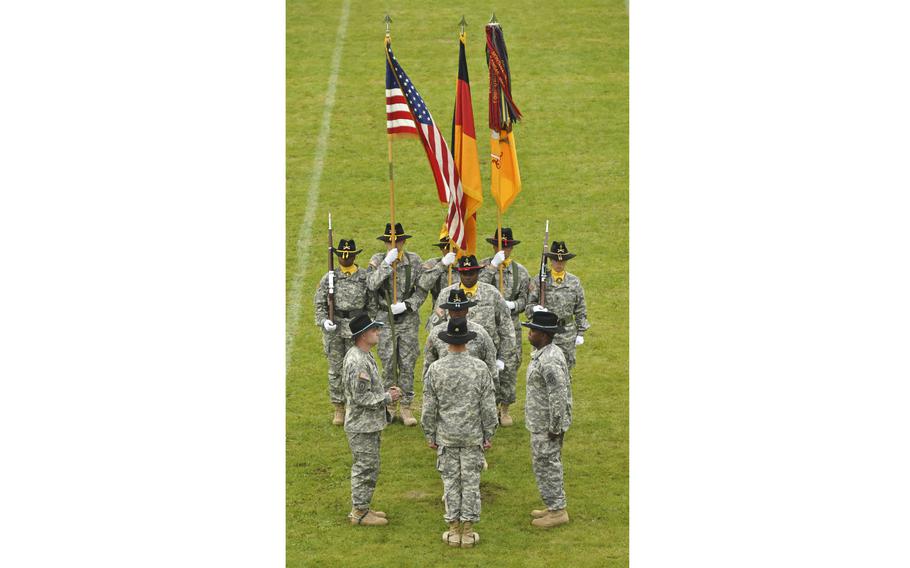 The 2nd Cavalry Regiment displays national flags and the regimental guidon during a change of responsibility ceremony in 2014 at Rose Barracks in Vilseck, Germany. The U.S. and German flags were stolen from the regiment’s headquarters overnight between Oct. 3 and Oct. 4, 2021, Army officials said. A Confederate battle flag was found on a flagpole outside and removed upon discovery, officials said. (William Tanner/U.S. Army)

GRAFENWOEHR, Germany — Military police are investigating after a Confederate flag was found flying from a flagpole outside 2nd Cavalry Regiment headquarters Monday and removed upon discovery, Army officials said.

An American flag and a German flag also were stolen from inside the headquarters building in Vilseck sometime between Sunday night and Monday morning by an unknown person, regiment spokesman Maj. John Ambelang said.

The incident at Rose Barracks, which is home to a regiment of about 4,800 soldiers, comes more than a year after the Defense Department effectively banned the Confederate flags and other symbols deemed divisive from public display on military bases.

“The regiment takes this misconduct very seriously,” Ambelang said in a statement. “Should the culprit be identified, the command will take appropriate action after considering all the facts surrounding the incident.”

Commanders across the regiment conveyed the seriousness of the situation to soldiers at a morning formation, the statement said.

Neither the theft nor the display of the Confederate battle flag align with the Army’s values, Ambelang said.

The regiment is working with military police to review base camera footage, Ambelang said. Officials also have asked anyone with information on the incident to contact the Department of Emergency Services on Rose Barracks at +49 966-283-3397.