Defense secretary will order military-wide stand down to address extremism 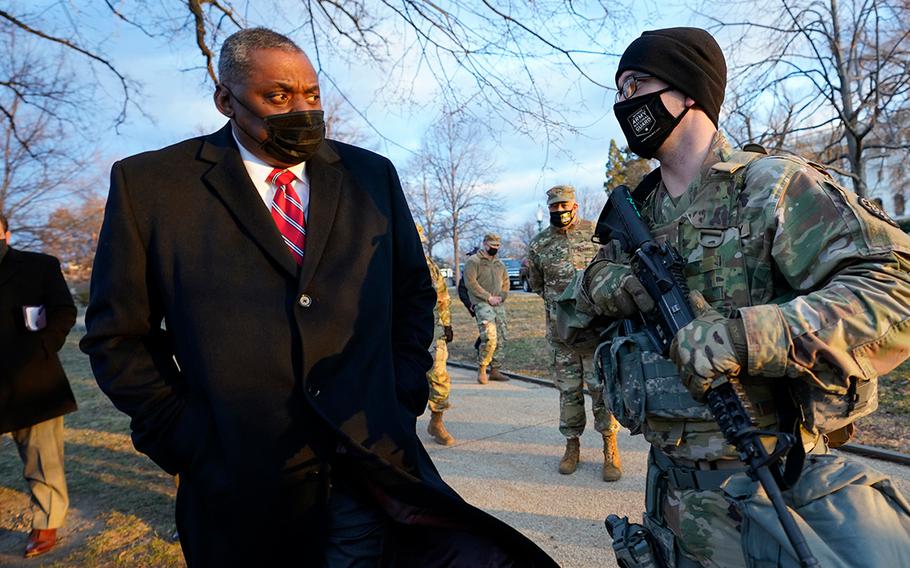 WASHINGTON — Defense Secretary Lloyd Austin told top Pentagon leaders Wednesday that he will direct a military-wide stand down to address extremism within the ranks, according to his top spokesman.

Austin wants all military units to take an operational pause to discuss extremism as he works to grasp the full scope of the issue and better address the longstanding problem, John Kirby, the Pentagon’s chief spokesman, told reporters Wednesday. The pauses are expected to occur within the next 60 days, but Austin has yet to determine how the stand downs are to be completed, Kirby said.

“The intent is to reinforce the [Pentagon’s] policies and values with respect to this sort of behavior and to have a dialogue with the men and women of the force and to get their views on what they are seeing at their level,” Kirby said. “He wants commands to take the necessary time to ... speak with troops about the scope of this problem. It's a two-way conversation.”

Austin spoke frankly with the acting service secretaries and uniformed service chiefs about his concerns about extremism in the military, including white supremacism, said Kirby, who attended the meeting. The new defense secretary, who is the first Black leader of the Defense Department, wants the service leaders to better grasp how pervasive the issue is within their formations and work with leaders to stamp it out, Kirby said.

The leaders concurred with Austin’s belief the issue was problematic and perhaps more pervasive than past Pentagon officials have known, Kirby said.

“One of the first things he said was: ‘This is a leadership issue, and it's leadership that goes all the way down ... to small-unit leadership level,’ ” he said.

The meeting on Wednesday was “an initial discussion” on the topic, Kirby said. He told reporters that he would provide specific details about the planned pauses and other actions that Austin might take in the near future.

The Pentagon already was reviewing its policies on extremism before Austin took over as defense secretary. Former acting Defense Secretary Christopher Miller ordered that review in December.

Austin’s thoughts on extremism have been shaped by his personal experience, he has said. He was often one of the lone Black officers in units that he worked in or commanded.

In 1995, Austin was a lieutenant colonel at Fort Bragg, N.C., when soldiers based there were charged with murder in the deaths of two Black people in nearby Fayetteville, N.C. The soldiers turned out to be members of a neo-Nazi group.

Austin has said the event was seminal in his understanding that there were extremists around him in the ranks.

“We woke up one day and discovered that we had extremist elements in our ranks, and they did bad things that we certainly held them accountable for,” Austin said last month during his confirmation hearing before the Senate Armed Services Committee. “But we discovered that the signs for that activity were there all along. We just didn’t know what to look for or what to pay attention to — but we learned from that.”

The Jan. 6 attack on the U.S. Capitol by a mob of supporters of former President Donald Trump was a new “wake-up call” for Austin, Kirby said. Among those charged in participating are more than two dozen military veterans and at least one current service member.

The Pentagon has a zero-tolerance policy for any service members engaging in extremist activity. But defense officials and lawmakers have long been critical of Pentagon efforts to keep extremists from its ranks.

Despite the attention that military-linked individuals have received for participating in the Capitol riot, Pentagon leaders still don’t have much sense of how many of its force hold extremist views.

Pentagon officials under the administration of former President Donald Trump declined to provide specific numbers about extremists in the ranks, but they said there was evidence those numbers were growing.

The FBI has declined to provide statistics about investigations that the agency has opened into the extremist activities of military members.

“So, where is it? It’s just not clear,” Kirby said Wednesday. “I think with respect to those statistics — the secretary, too, is frustrated that this is an issue and that we don't have better visibility, a better understanding of it.”