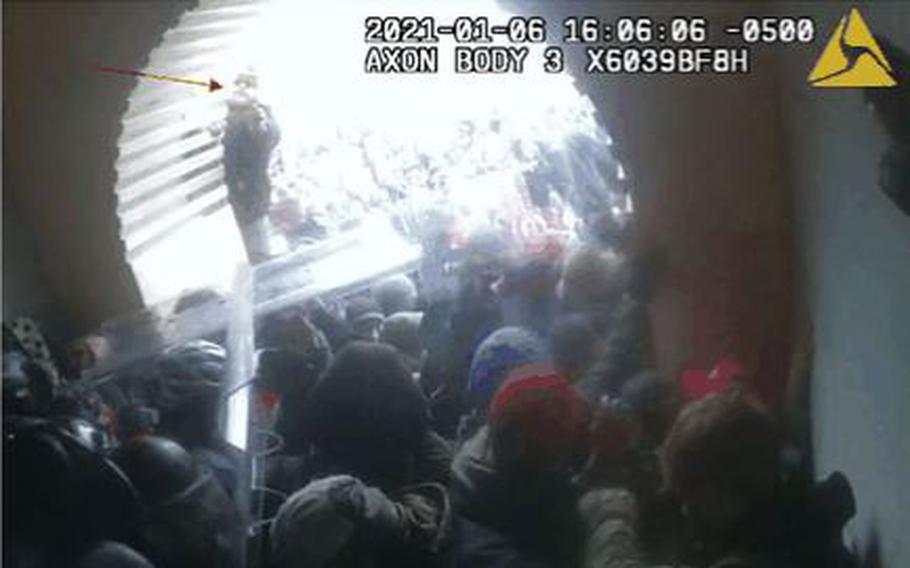 A former Fort Bragg soldier, who reenlisted in the Army after attacking police with chemical spray during the riot at the U.S. Capitol, will now serve the longest prison sentence handed down so far against a defendant tied to the massive insurrection case.

On Friday, a federal judge in Washington sentenced both James Mault of Fayetteville, N.C., and a co-defendant to 44 months in prison plus three years of supervised release.

“They were not patriots on Jan. 6,” Chief U.S. District Judge Beryl Howell said during the hearings for Mault, 30, and Cody Mattice, 29, of Greece, N.Y., according to NBC News. “No one who broke police lines that day were. They were criminals.”

A weeping Mault, formerly of Brockport, N.Y., took responsibility for his actions but asked for leniency.

“Those police officers did not deserve what happened to them,” Mault told the judge before she announced his punishment. “As a soldier, I should have known better.”

That Mault was a soldier at all was a bit of a fluke. The Army veteran had been fired from his ironworker’s job in New York after the Jan. 6, 2021, insurrection at the Capitol.

Mault and Mattice were interviewed by the FBI and both denied taking part in the violence against police that left more than 140 officers injured and left at least five people dead.

Mault, who served four years as an Army combat engineer in Kuwait, reenlisted in May. According to The Washington Post, the Army said it was not aware he was being investigated by the FBI when it allowed him to return.

He was arrested at Fort Bragg in October after investigators obtained videos that placed him and his friend Mattice at two front lines of the Capitol violence, according to court documents.

At around 2 p.m. on Jan. 6 on the West Plaza outside the Capitol, Mault urged officers in the police line to join the insurrection.

“Your jobs will be here when you come back after we kick the s--- out of everyone,” he said on Mattice’s video of the exchange, court documents show.

When diplomacy did not work, Mault and Mattice pulled down several of the metal barricades in front of the police line and helped other rioters muscle through toward the Capitol, documents allege.

Later, both men crowd-surfed their way on top of the mob to the mouth of the west terrace tunnel leading into the building. There, they were caught on camera, firing chemical sprays toward police — in particular an officer identified in court documents as M.A.

Texts and emails obtained by the FBI show Mault and Mattice had planned the violence for days, including an exchange of tips on what protective clothes to wear and what weapons to bring.

Both pleaded guilty in April to felony assault on police officers. Their sentences were enhanced by their use of chemical sprays. In return for the guilty pleas, prosecutors dropped other charges that could have added years to their punishments.

“My friends and I went to the Capitol on Jan. 6 with the best intentions,” Mault told the judge on Friday, according to The Post. “Our protest got terribly out of hand, I fell into the mob mentality, and I didn’t think about what I was doing.”

To date more than 850 people have been arrested in connection with the Capitol violence, including more than 260 who have been charged with assaulting or impeding police officers. Of those sentenced, only four have received longer prison terms than Mault and Mattice, according to The Post.

At least 23 North Carolinians have been charged in connection with the riot, including purported members of the Proud Boys and Oath Keepers extremist groups. Others remain under investigation.

Howell, the judge, said her sentences had to serve as a warning to “future malcontents disappointed with the outcome of an election” contemplating the obstruction of the peaceful transfer of power — “especially by directing participating in violence as these two defendants did,” The Post reported.