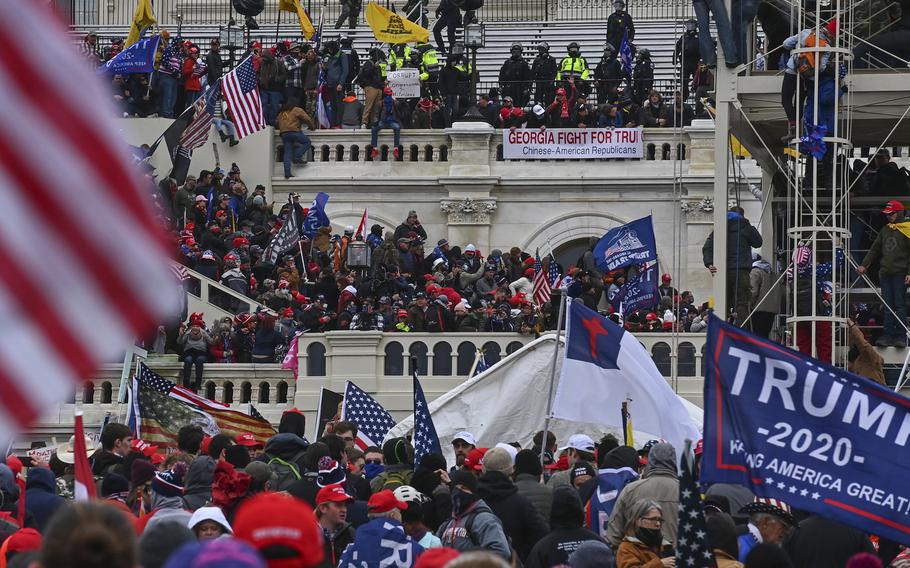 WASHINGTON — Experts with the Rand Corp. suggested in a new report that the U.S. military use technology to track online trends and work with local law enforcement agencies to stamp out extremism within its ranks.

Rand, a nonprofit think tank, published a report Thursday that offered a framework for identifying and extricating extremists from the military. The report noted multiple, recent instances of service members engaging in violent protest, including the 2017 “Unite the Right” rally in Charlottesville, Va., and the riot at the U.S. Capitol on Jan. 6.

At least five service members face federal charges for allegedly participating in the riot, during which a mob that sought to overturn the results of the 2020 presidential election stormed the Capitol and disrupted a joint session of Congress.

“The vast majority of military personnel and their families are not extremists,” according to the authors of the Rand report. “But even a small number of people engaged in extremist activities could damage the U.S. military’s reputation, its force, its members and the larger community.”

One method that Rand recommended was using machine-learning technology to spot online trends of extremist groups targeting the military community. Using artificial intelligence, the military could create models that would detect extremist communities on social media and see whether they’re targeting service members with misinformation and trying to recruit them.

The Rand report warned the use of machine learning could create privacy concerns, and there’s the risk for false results.

“The internet and social media have reduced the costs of creating, sustaining and growing extremist organizations,” the report states. “[The data are] publicly available, and recent advances in machine-learning methods would allow trained professionals … to spot early patterns of extremist activities.”

Extremism often emerges from and affects the broader military community, the authors of the report said. The agencies should share information about extremist slogans or symbols appearing on the installation or in the community, as well as any rumors or misinformation being spread that could stoke conflict.

In response to the Jan. 6 riot at the Capitol, Defense Secretary Lloyd Austin ordered a military-wide stand-down to address extremism. In April, he created a Counter Extremism Working Group to study extremism within the military ranks, including the ability of the services to weed out recruits with extremist views and whether military law or regulations should be amended to address the issue.

The Defense Department policies on extremism now task commanders with detecting and investigating acts of extremism, as well as doing early intervention when they observe signs that troops could engage in extremist activities. During this process, commanders must also judge whether taking action could infringe on service members’ right of expression.

“This is a tremendous responsibility, particularly given that commanders are not subject-matter experts in extremism,” the report states. “Even for experts, this would be difficult because many of the precursors to extremism are common.”

Rand’s proposed framework for the military asks leaders to first create a clear definition for “extremism” and give commanders more guidance about how they can balance the rights of service members with stamping out extremism in their units.

Military regulations are murky about precisely what constitutes extremist activity, and current Defense Department rules do not bar troops from membership in extremist organizations unless they actively participate in activities deemed illegal or that could harm military order and discipline. Austin has charged the new Counter Extremism Working Group with reviewing the Pentagon’s rules regulating extremism, including whether the Uniform Code of Military Justice should include a specific crime related to extremism.

The experts also recommended the military design programs that could prevent service members and their families from associating with extremist groups or developing those beliefs. The programs should focus on counseling people when they first begin showing signs of extremism, which could include feelings of frustration and anger toward authorities, culture or society.

Rand suggested base chaplains — who are a “key line of defense” for service members’ concerns — can play a large role in helping troops manage their feelings and find legitimate channels to air their grievances.

Finally, Rand recommended the Defense Department improve its process for collecting data about extremism in the military. The Pentagon now uses the Defense Incident-Based Reporting System, which records overall law enforcement activities and statistics within the military and shares them with the FBI.

However, certain codes used in the reporting system don’t align with what the FBI uses. For example, the FBI system, called the National Incident-Based Reporting System, has a code for reporting bias against lesbian, gay, bisexual or transgender individuals. The military’s system has no code for reporting transgender bias. Those two systems should align, Rand said.

“The integration would ensure that trends in extremism are shared between civilian and military law enforcement agencies,” Rand wrote.