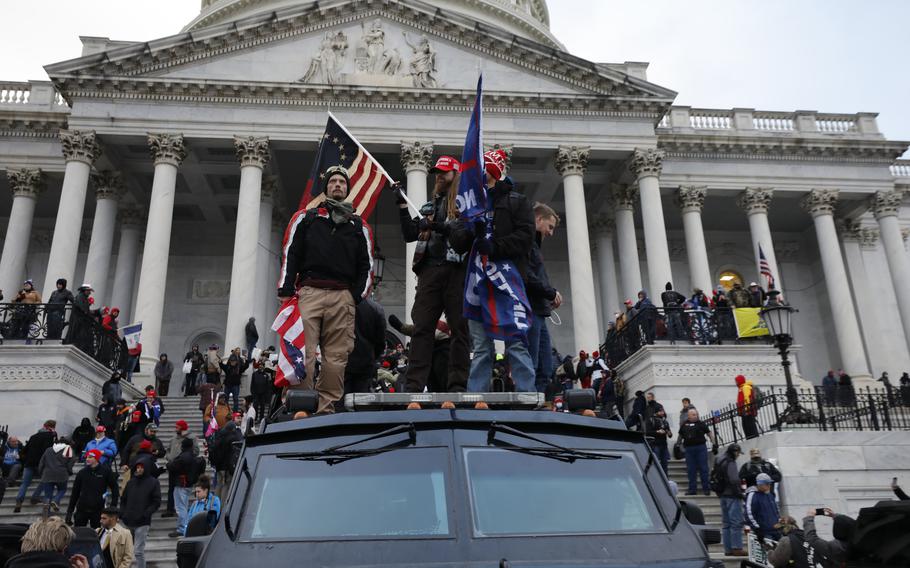 Supporters of President Donald Trump riot at the U.S. Capitol in Washington, D.C., on Wednesday, Jan. 6, 2021. House Democrats are asking for legislation to make sure that military personnel and recruits are not participating in extremist activities as was seen at the Capitol insurrection. (Yuri Gripas, Abaca Press/TNS)

But the debate over what extremism means and how such a prohibition would be enforced is expected to be fierce — starting at Wednesday’s House Armed Services Committee markup of the fiscal 2022 bill.

Maryland Democrat Anthony G. Brown plans to file an amendment at the markup that would make explicit a military commander’s authority to bar or expel people who espouse or act on extremist beliefs or are members of such groups. The amendment also says that the military can use social media posts as evidence of extremist views that could lead to so-called separation from service.

“An individual who engages in extremist activities or is a member of an extremist organization may not serve as a member of the armed forces,” states a draft of the amendment.

Brown would leave it to the secretary of defense to define extremist activities. A Pentagon Countering Extremism Working Group is reportedly already at work on that question.

Brown told CQ Roll Call in a statement that he recognizes that extremists form a tiny fraction of the U.S. military, but he believes it is a growing peril.

“Racism, white supremacy, antisemitism, discrimination, and other extremist beliefs are not in line with the values of our armed services and have no place in our ranks,” Brown said.

Brown’s amendment would set up a Pentagon Office of Countering Extremism to track reports of such behavior across the Defense Department’s uniformed and civilian ranks. The office would share data on the problem with other federal agencies and would produce an annual report to Congress. The amendment would empower the military services to train personnel and recruiters in identifying and avoiding extremism.

The amendment is a response to recent data indicating that extremists — ranging from white supremacists to criminal gangs — represent a small but seemingly growing and increasingly dangerous portion of the U.S. military. The fact that some 20% of the rioters in the Jan. 6 attack on the Capitol reportedly had ties to the military has catalyzed these concerns.

But Republicans have regularly pushed back against most attempts to crush extremism in the ranks and are expected to do so again. The GOP critics generally say Democrats are exaggerating the extent of the problem. Republicans say they are concerned too that what constitutes extremist activity is not clearly defined. And they worry that service members’ privacy and their rights to due process could be threatened.

Brown’s extremism amendment is not the only NDAA proposal that will stir a racially charged, partisan debate.

One of the highest-temperature debates could come when Republicans offer one or more amendments seeking to restrict the Pentagon from teaching so-called critical race theory, an academic approach to reexamining how racial bias is encoded in social institutions.

Brown, a retired Army aviator and judge advocate general, believes U.S. military commanders already have inherent authority to ban extremism to the degree that it is, by its nature, a threat to military order and discipline. His measure is intended to clarify the terms of that authority, aides said.

The amendment does not create a new crime in the Uniform Code of Military Justice but would alter the law to explicitly authorize commanders to root out — be it in recruits or those currently serving — anyone who advocates hatred based on bigotry or puts it into violent practice.

The measure would not mandate monitoring of social media but would authorize the services to use an online post advocating supremacist views as cause for discharge.

Brown also argues that nothing in the bill would shortchange due process protections for service members.

Even beyond the attack on the Capitol, troubling signs have appeared recently of a small but festering problem in the ranks.

The director of national intelligence said in March that violent extremists pose “a heightened threat to the homeland.”

Moreover, the Army Criminal Investigation Command, in a report last year, found a 66% increase in gang or domestic extremist activity from the previous year, Brown said.

A 2019 survey found more than one third of all active-duty servicemembers had witnessed instances of white nationalism or ideologically driven racism in their units.

The Pentagon has been working on this issue for many months.

Defense Secretary Lloyd J. Austin III required in February that all military commanders take time over a two-month period to discuss extremism. And he set up the Countering Extremism Working Group to study the issue.

In April, Austin ordered the review of how best to define extremism. He also mandated updating security questionnaires to more accurately determine recruits’ backgrounds on the issue. And he required new training for retiring personnel who may face recruitment efforts from extremist groups.

In 2020, after protests over the killing of George Floyd, the department convened a task force to take a closer look at military efforts to become more racially diverse. One of the group’s recommendations, buried in its voluminous report, was to make extremist violence punishable under the military’s code of justice.

The House’s fiscal 2021 NDAA included language by California Democrat Jackie Speier that would have done just that. But senators, fearing a veto by President Donald Trump over the issue, diluted that mandate in the final measure, Speier said earlier this year.

The Senate’s fiscal 2022 NDAA would again defer definitive action on the matter. It would merely require the Defense secretary to report to Congress on whether and how to potentially make violent extremism a crime under the military code.

The House Appropriations Committee’s report accompanying its Defense Department spending bill would require a series of Pentagon reports on its efforts to address extremism.

During the markup of that bill, Republicans gave voice to arguments that may come up again during Wednesday’s House Armed Services markup.

The Republican appropriators said they were worried the campaign against extremists could target unpopular views or become an unfair witch hunt, or target only white supremacists and not other violent extremists.

The Appropriations Committee defeated an amendment by Mario Diaz-Balart, R-Fla., that aimed to block funding for the Pentagon’s Countering Extremism Working Group until 30 days after the Defense secretary performs three tasks: gives Congress a definition of extremism; briefs lawmakers on due process protections for those accused of extremism; and certifies that their First Amendment rights are not violated by that process.

The 24-33 vote to defeat the amendment fell along party lines.