WASHINGTON — The new National Strategy to Combat Domestic Terrorism calls for ramping up the screening processes for military recruits and implementing training for troops leaving the services to ensure they are not lured into domestic terrorist organizations seeking new members.

“This strategy is narrowly tailored to focus specifically on addressing violence and the factors that lead to violence – violence that violates the law, threatens public safety, and infringes on the free expression of ideas,” President Joe Biden said in the strategy document.

The National Security Council’s plan, which was released Tuesday, comes about six months after the Jan. 6 riot at the Capitol during which a mob of supporters of former President Donald Trump broke into the building and rampaged through the halls as Congress voted to certify Biden’s presidential win. More than 40 veterans, four reservists and one active-duty Marine were arrested in the attack, according to the Pentagon.

An Office of the Director of National Intelligence report in March found domestic violent extremists’ threats increased in 2021 — with white supremacists and anti-government militias posing the highest risk, officials told reporters on condition of anonymity during a teleconference Monday.

“Newer sociopolitical developments — such as narratives of fraud in the recent general election, the emboldening impact of the violent breach of the U.S. Capitol, conditions related to the [coronavirus] pandemic, and conspiracy theories promoting violence — will almost certainly spur some [domestic violent extremists] to try to engage in violence this year,” according to the report, which was included in the strategy document.

The document includes many lines of effort in battling domestic terrorism, including several geared toward the Defense Department.

Defense Secretary Lloyd Austin in a Tuesday statement called the first-ever federal strategy to combat domestic terrorism “a milestone in our country’s efforts to address a serious and growing security threat.”

“While domestic law enforcement agencies take the lead, the Department of Defense will do our part to support this important strategy,” Austin said in his statement. “That includes maintaining the department’s robust relationship with federal law enforcement as well as refining our policies to better address this issue within the department.”

For example, in an effort to root out potential domestic terrorists applying for federal work or joining the military, the government is “considering changes” to federal employee and applicable military screening questionnaires, according to the strategy.

“This effort can help to ensure that new applicants and employees undergoing re-investigations are abiding by legal obligations, including in providing candid and forthright representations, and to prevent individuals who pose domestic terrorism threats from being placed in positions of trust,” the NSC wrote in its strategy document.

The strategy also includes efforts to identify current government employees who pose potential domestic terrorism threats, with federal agencies developing new policies and programs to screen for domestic extremists in law enforcement and in the military.

“The Department of Defense, for example, is reviewing and updating its definition of prohibited extremist activities among uniformed military personnel and will consider appropriate policy recommendations and options to address such activity by and among civilian employees and contractors,” the National Security Council wrote in its strategy document.

As part of the plan, the Pentagon is also “incorporating training for service members separating or retiring from the military on potential targeting of those with military training by violent extremist actors,” according to the strategy document. 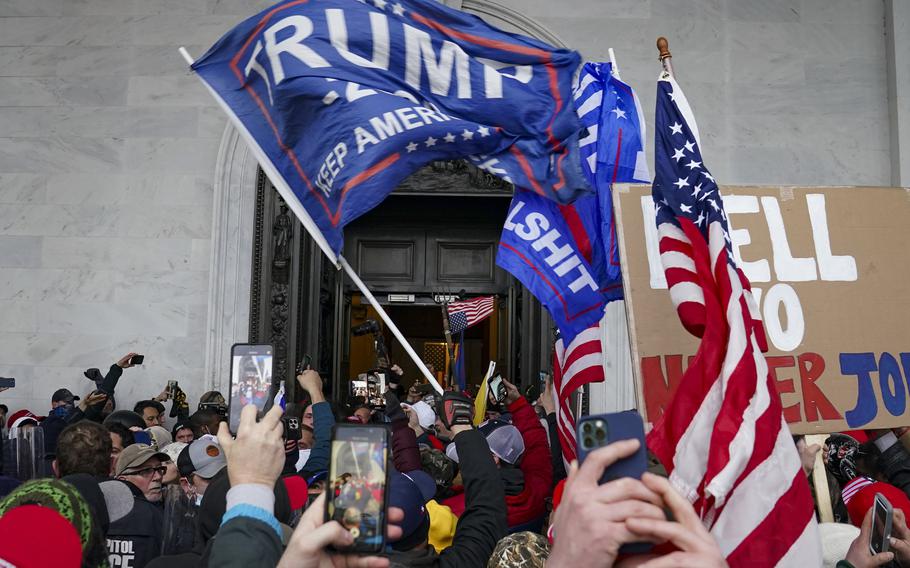 Rioters break into the Capitol in Washington on Jan. 6, 2021. (John Minchillo/AP)
Caitlin Doornbos