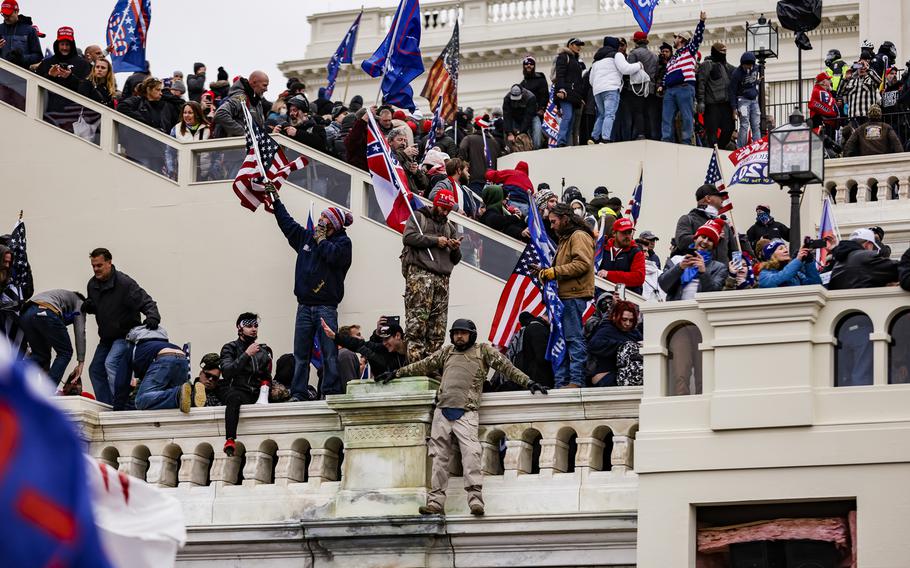 Members of the military participated in the storming of the U.S. Capitol following a rally with President Donald Trump on Wednesday, Jan. 6, 2021, in Washington, D.C., adding to evidence that extremism is fomenting in the military ranks. (Samuel Corum, Getty Images/TNS)

WASHINGTON (Tribune News Service) — Christopher Warnagiris became the fifth service member, and the first on active duty, arrested for participating in the Jan. 6 pro-Trump insurrection at the Capitol.

The Marine Corps major is charged with a slew of federal offenses after video and photographs showed him violently storming the Capitol, pushing through a line of police officers guarding the East Rotunda doors and using his body to keep the door open and pull others inside.

His arrest seemingly adds to the growing body of evidence that extremism is fomenting in the military ranks and, according to some lawmakers, defense officials and experts, needs to be addressed.

“People in the white supremacist movement share a mindset that they’re besieged — they feel like they’re in enemy territory. And they recruit veterans to help them fight back,” says Chuck Leek, a Navy veteran who once recruited more than a dozen of his military colleagues to a white supremacist group.

Leek, who now works to bring others out of extremism, says he is certain that service members and veterans are still being recruited.

But some in the Capitol that day, and leaders within the military itself, insist that simply isn’t the case — at least not in any significant numbers. Indeed, two senior military officials recently told lawmakers there were “zero” extremists under their command.

That disconnect over the scope of the problem and what, if any, legislative solution is needed may be perhaps the biggest hurdle obstructing efforts to change military policy and culture on the issue of extremism.

The dynamic played out at a House Armed Services hearing in March at which Mike D. Rogers of Alabama, the top Republican on the panel, said the country lacks “any concrete evidence that violent extremism is rife in the military, as some commenters claim.”

“This is far from the largest military justice issue facing our armed services — anecdotes and online polls should not be our guide,” added Rogers, who was among the lawmakers who, hours after the riot, voted to reject the results of the 2020 presidential election.

Chairman Adam Smith warned that the panel would continue to pursue the issue, particularly given the disproportionate number of people with military ties arrested for their involvement at the Capitol on Jan. 6.

“I don’t think we should have had 1 percent of the people storming the U.S. Capitol having served in the military. That we had 20 percent is cause to go, hmm, maybe we should look and see what else is there,” Smith said. “And just because it doesn’t 100 percent line up with your worldview doesn’t mean that we don’t get to talk about it. So we are going to talk about it.”

The problem of extremism in the military isn’t new, and the military’s response has often been haphazard and inconsistent, allowing extremism to spread in the ranks undetected or ignored by some commanders until the issue is thrust into the forefront.

“The Pentagon’s attention to the issue of extremism tends to be episodic, and the crackdown short-lived,” said Mike German, a fellow with the Brennan Center for Justice’s Liberty & National Security Program and former FBI special agent. “I think what we have to do, not just the military but society, is recognize this is a persistent problem that needs a consistent response rather than periodic.”

No centralized office exists within the Defense Department dedicated to fielding reports of extremist activity. And none of the services, with the exception of the Navy, catalog which service members have been kicked out for extremist activity.

For the Army, Marine Corps, National Guard, Coast Guard and Air Force, there is no special designation on discharge and separation forms for people booted for extremist activity. And even if such a designation existed, the Pentagon does not centrally track those cases at any level.

“Our experience has been, given the lack of overall guidance or uniform training on this issue, responses from the military are fairly haphazard or varied,” said Mark Pitcavage, a senior research fellow with the Anti-Defamation League’s Center on Extremism. “We’ll reach out about an extremist at one base and it’s dealt with promptly, whereas somewhere else we refer someone similar and they don’t quite know how to deal with it, or nothing gets done or there’s a lengthy delay.”

Last year, California Democratic Rep. Jackie Speier wrote a provision in the fiscal 2021 defense authorization bill that specifically listed violent extremism as a crime in the Uniform Code of Military Justice. The House passed the provision, but it was dropped during negotiations with the Senate to avert a veto from former President Donald Trump — who vetoed the bill anyway.

Maryland Democrat Anthony G. Brown, a member of the House Armed Services Committee, says he plans to offer an amendment to this year’s Pentagon policy bill that would better define what constitutes a service member’s participation in an extremist group — and make it easier to oust those who do.

Brown, who served in the Army, said he would also propose that Congress authorize the Pentagon to collect data about service members who belong to extremist groups.

“So that we don’t have [commanders] saying there are no extremists in my organization. Let’s show them the data. So we have to collect the data, and there has to be the capacity within the DOD to be able to do that,” Brown said.

This year, Speier, the chairwoman of the Armed Services Military Personnel Subcommittee, also has focused on stemming the spread of extremism by not allowing people with a track record of extremism into the military in the first place.

In February, she sent a letter to President Joe Biden urging him to issue an executive order that would require the Defense Department to screen the social media accounts of all incoming military recruits and those seeking security clearances for evidence of extremist activities.

The White House has not done so, but Speier is in discussions with the administration, including Defense Secretary Lloyd J. Austin III, over new policies on the issue of extremism.

“All service members are supposed to be able to obtain a secret or top-secret security clearance, and we expect cleared individuals to not sympathize with violent extremists, yet we allow military service members to be members of such organizations,” she said at the March hearing.

The potential value of checking social media accounts was underscored just weeks after the riot when The Associated Press reported that 12 members of the National Guard were removed from their deployment securing Biden’s inauguration after evidence was found that the troops had ties to right-wing militia groups or had posted extremist views online.

That task, however, is getting more difficult.

“Between 2006 and 2009, we were able to identify and report some 72 extremists in the military — from all branches, including the Coast Guard,” Pitcavage said. “But eventually they learned to be more circumspect in terms of what they posted online, though sometimes there are still slip-ups.”

In a 2019 survey of 1,630 active-duty service members conducted by Military Times, 36 percent of respondents said they had seen evidence of white supremacist and racist ideologies in the military. That number jumped to more than half when minority service members were asked.

According to an unclassified FBI intelligence assessment published in July 2008, at least 203 individuals with confirmed or claimed military service were active in the extremist movement between 2001 and 2008.

Although the number was relatively small in comparison to the estimated level of white supremacists in the U.S. at the time of the report’s release — which the FBI estimated at somewhere in the “low thousands” — military veterans had a much higher impact than typical members.

Fast-forward a dozen years. An October 2020 Pentagon report to Congress, obtained by CQ Roll Call in February, detailed how some white supremacists currently operate in the armed forces.

In screenshots first published by the news site Ars Technica, a user of the neo-Nazi online forum Iron March, who described himself as an infantryman, detailed how it was possible to find “our kind” in the military’s ranks.

“A good way people in the military find other rightists is to simply wear a shirt with some obscure fascist logo,” the person wrote.

And that was before the Jan. 6 riot, in which 44 of the people charged had military experience, including the five who currently serve. More than a third of the veterans arrested have reported ties to domestic extremist organizations, according to a joint report from the Program on Extremism at George Washington University and the Combating Terrorism Center at West Point.

On Feb. 5, Austin ordered a servicewide, 60-day review aimed at helping the department better understand the extent of extremism in the military and giving service members an opportunity to have candid conversations about their experiences.

The Defense Department is still reviewing lessons from the so-called stand down, but Austin, a retired four-star general and the first Black Defense secretary, made some preliminary changes last month, including ordering the department to review its definition of extremism and what activities are prohibited for uniformed military personnel.

His order also establishes a way for veterans to report attempted recruitment by extremist groups after leaving the military and trains retiring service members on how to spot those attempts.

And the directive requires the secretaries of each branch to update their screening questionnaires in an effort to better identify extremists looking to join the military, seemingly a nod to Speier’s efforts.

“We have a lot of work to do,” Austin told reporters on May 6. “And I want to be blunt. There is no place for hatred or bigotry or extremist behavior in this department or in the military.”