Documentary ‘I Am Vanessa Guillén’ debuts Thursday on Netflix 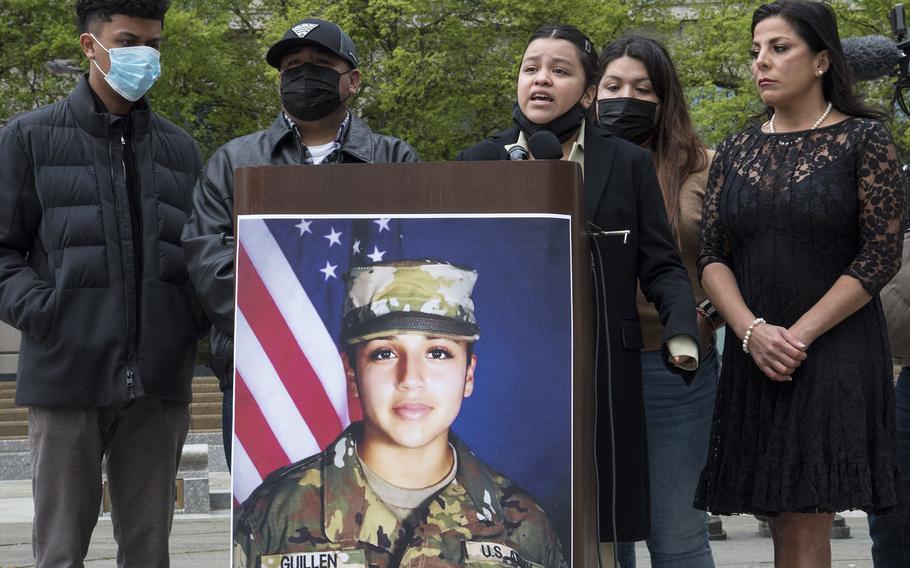 WASHINGTON (Tribune News Service) — A new Netflix documentary about Vanessa Guillén — the Army Specialist who went missing and was found slain at Fort Hood in 2020 — chronicles her family’s fight for justice in the aftermath of the 20-year-old Houston native’s death, as lawmakers grappled with how to improve the way the military handles sexual assault and harassment.

The documentary, which will debut on the streaming platform Thursday, will follow two of Guillén’s sisters, Mayra and Lupe, as they pushed for reforms to combat sexual harassment and assault among soldiers and improve how the crimes are prosecuted, the Austin American-Statesman reported.

The film, titled “I Am Vanessa Guillén,” was directed and produced by Christy Wegener, who has served as a producer on several shows, including “Oprah’s Master Class” starring Oprah Winfrey and “RuPaul’s Drag Race.”

Several lawmakers who led the fight for new legislation on Capitol Hill, including Sen. Kirsten Gillibrand, D- N.Y, and Rep. Jackie Speier, D- Calif., will be featured in the documentary as well.

“This was not one of those cases the military could sweep under the rug,” Speier can be heard saying in the trailer for the film.

Guillén went missing from Fort Hood on April 22, 2020. Her body was found dismembered two months later. In the months before her death, her family said, Guillén was acting differently, and when pressed, said she was being harassed at work, but that she didn’t feel comfortable coming forward.

The Army later confirmed in a report, released over a year after her death, that she was sexually harassed by a supervisor, but not by the soldier the Army believes killed her. The report also detailed additional findings related to her death and a culture of sexual harassment at Fort Hood, including command failures.

According to investigators, Guillén was bludgeoned to death at Fort Hood by Spc. Aaron Robinson, who killed himself on July 1, 2020 as police were trying to take him into custody. Robinson’s girlfriend, Cecily Aguilar, who is accused of helping him dispose of Guillén’s remains, is set to stand trial in January, the Statesman reported.

The botched handling of Guillén’s case — and the toxic climate at Fort Hood that subsequent investigations unveiled — launched a national movement to shed light on sexual misconduct in the military.

The hashtag #IAmVanessaGuillén became a rallying cry on Twitter, akin to the #MeTooMovement, where soldiers and veterans across the country shared their stories about harassment and assault they experienced during their service.

Members of Congress on both sides of the aisle, including Texas Sens. John Cornyn and Ted Cruz and Reps. Sylvia Garcia, D- Houston, and Veronica Escobar, D- El Paso, began to introduce and push for legislative reforms to address some of the problems Guillén’s death revealed.

Guillén’s family urged lawmakers to pass the “I Am Vanessa Guillén Act” to prevent what happened to Guillén from happening again, and in December of last year, President Joe Biden signed some of it into law as part of the 2022 National Defense Authorization Act, the annual defense spending bill.

The provisions passed included stripping the authority to prosecute sex offenses from military commanders — moving decisions to prosecute rape, sexual assault, murder, manslaughter and kidnapping out of the chain of command —and creating offices for independent military prosecutors to handle these cases.

In January 2022, Biden signed an executive order to establish sexual harassment as a specific offense under the Uniform Code of Military Justice, and in April, a group of lawmakers in both chambers introduced companion bills that contain key provisions of the I Am Vanessa Guillén Act that were not included in the NDAA.