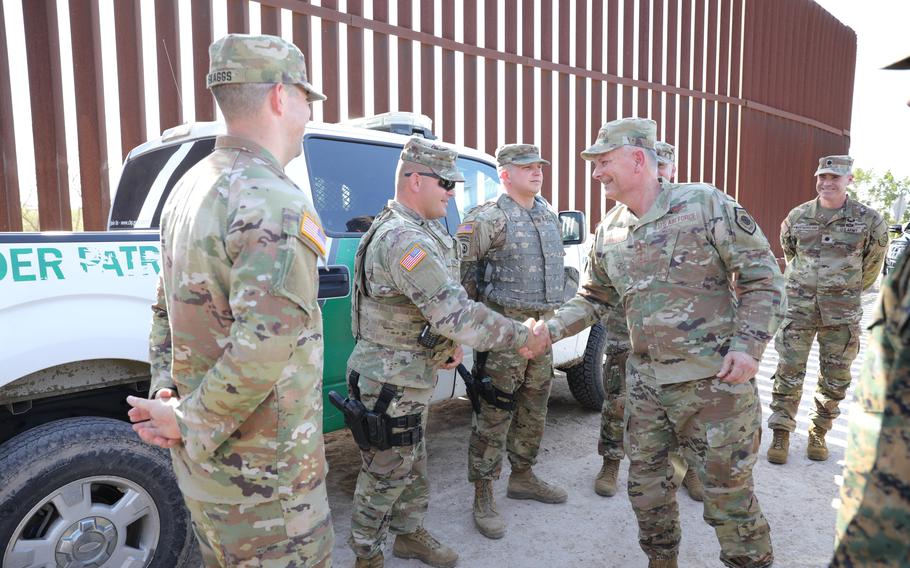 AUSTIN, Texas — Some troops deployed by the Defense Department along the U.S. border with Mexico are being sent home, though the military mission will stretch into a fifth year, according to U.S. Northern Command, which oversees the operation.

As many as 2,500 service members were approved in July by Defense Secretary Lloyd Austin to work alongside U.S. Customs and Border Protection through September 2023, said Bill Lewis, spokesman for NORTHCOM. That’s down 500 troops from the previous year’s authorization.

A memo signed July 8 by Austin states troops can provide support for infrastructure, operations, detection and monitoring, and aviation “so long as such support does not affect military readiness,” he said.

About 2,900 National Guard troops from more than 25 states are deployed now to the Mexico border in Texas, California, Arizona and New Mexico, Lewis said. There are more deployed than are authorized because new units have to arrive to assume responsibility from other units doing certain jobs, he said.

These deployments began in April 2018 following then-President Donald Trump’s declaration of an emergency at the border caused by migrants crossing illegally into the United States. When President Joe Biden took office in January 2021, he rescinded the emergency declaration, but left the troops at the border.

At one point in 2019, the Defense Department had nearly 8,000 troops deployed to the border, which included about 5,800 active-duty service members. However, a Government Accountability Office report released in February 2021 found the deployments had a negative impact on those units, and the military has phased out using active-duty troops at the border.

The troops ordered to the border by the Defense Department operate separately from a deployment of about 5,400 Texas National Guard troops working on a state-sponsored mission that began in March 2021 to help state police deter illegal activity between the legal ports-of-entry.

Arizona also has about 290 National Guard troops on state orders providing support operations to civilian law enforcement agencies near the border to allow more police officers to be on patrol.

In January, NORTHCOM officials said it had launched an internal investigation into the mission, though it declined to say what exactly it was investigating.

“The investigation has been completed and the results and findings are being reviewed by [Defense Department] leadership,” Lewis said.

Air Force Gen. Glen VanHerck, the commander of NORTHCOM, told the Senate Armed Services Committee in March that the troops are only meant to support and backfill federal border agents until they can handle their mission on their own.

“Long term this is not an enduring mission of the DOD. We need to fully fund and resource [the Department of Homeland Security] to do their mission and the DOD should be used in extremist times in support of the border mission,” he said.