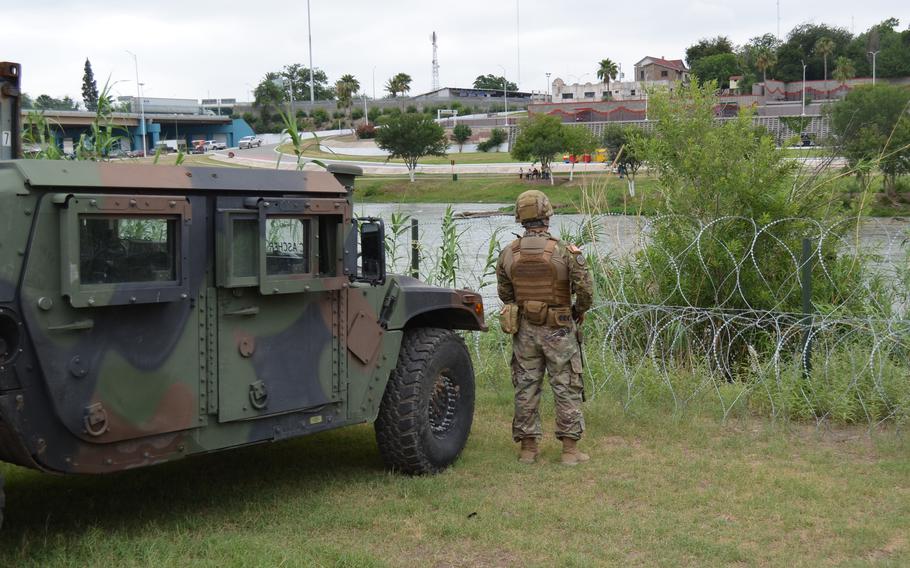 AUSTIN, Texas — A National Guard soldier died Tuesday morning from a self-inflicted gunshot while working on a state-sponsored mission at the Mexico border, state officials said.

The incident occurred in Eagle Pass, a city along the Rio Grande in west Texas, Gov. Greg Abbott said.

“Our hearts go out to the family and loved ones of the soldier,” Abbott said in a statement. The governor described the soldier’s death as a suicide and encouraged anyone in crisis “to seek help immediately from a family member, loved one, or a mental health service."

The Texas Rangers, which are part of the state police, are leading the investigation into the soldier’s death with assistance from the state National Guard, Department of Public Safety and local law enforcement.

State police and the Guard declined to answer questions about the incident. The soldier’s name has been withheld pending family notification.

“We are deeply saddened to have lost one of our own today. We extend our deepest condolences to the family,” said Maj. Gen. Thomas Suelzer, the Texas adjutant general.

About 5,400 Texas Guard members were deployed to the border as of July as part of a mission known as Operation Lone Star. Working alongside state police, the mission of the troops is to deter illegal activity at the border, including people attempting to enter the U.S. from Mexico between the legal ports of entry.

Eagle Pass has become a busier location for migrants crossing the Rio Grande because the water can be shallow enough to walk across, according to Guard officials and U.S. Customs and Border Protection agents. Troops have added barbed wire and shipping containers along some stretches of the river to deter people from crossing.

In April, Sgt. Bishop Evans died in Eagle Pass when he tried to save migrants struggling in the water as they attempted to cross the river.

Abbott recommended in his statement that service members and veterans seek crisis support resources through the Texas Military Department at https://tmd.texas.gov/crisis-support-now, or through Texas Human and Health Services at https://www.hhs.texas.gov/services/mental-health-substance-use/mental-health-crisis-services.