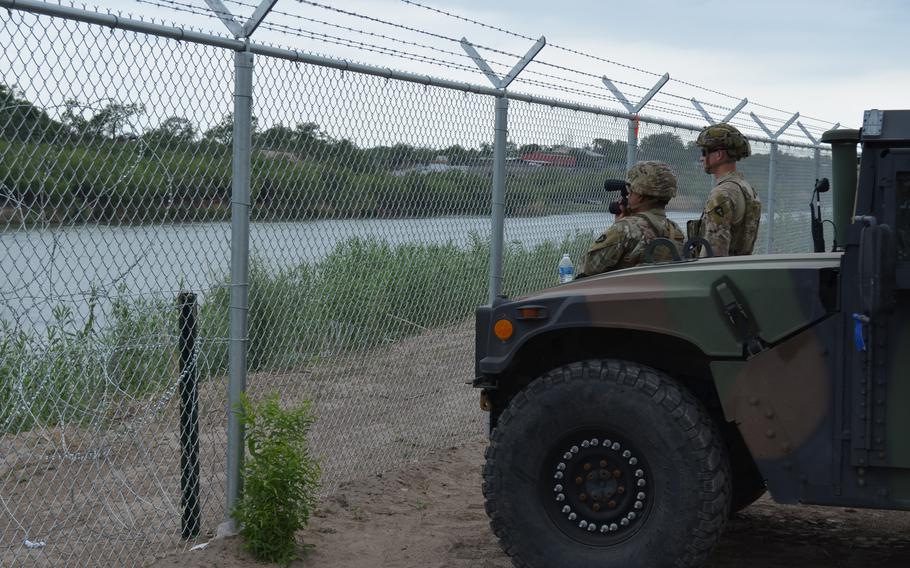 Members of the Texas National Guard on patrol in May along the Rio Grande in Eagle Pass, Texas. (Rose L. Thayer/Stars and Stripes )

AUSTIN, Texas — Texas National Guard troops who served on the governor’s mission to prevent criminal activity at the state’s border with Mexico could owe thousands in federal taxes next year because a glitch in the payroll system underestimated withholdings, Guard officials said.

The amount owed will vary based on each Guard member’s rank, marital status, time of service and time spent deployed to the mission dubbed Operation Lone Star, according to documents used to brief troops on the subject that were obtained by Stars and Stripes.

The problem began when the state decided to switch service members from being paid once a month to twice a month to mirror the pay periods of federal troops who are paid through the Defense Financial Accounting System, according to a Texas Guard official who spoke on condition of anonymity.

The system that Texas uses to pay state employees, the Centralized Accounting and Payroll/Personnel System, underestimated federal withholdings when that happened, the official said. The glitch was discovered in July.

The problem will persist through the end of the year, and the Guard will switch back to paying troops once a month in January, the official said.

“They're asking soldiers to figure this out themselves,” said Spc. Hunter Schuler, a Guard soldier who has become an advocate for fair treatment on the border mission.

He said the spreadsheet provided by the Guard to estimate tax bills is complicated. Schuler estimated he will owe about $2,500 in taxes.

This isn’t the first time that Texas has botched pay for troops on the border mission. A year ago, Gov. Greg Abbott rapidly increased the number of troops deployed to the mission to about 10,000. Guard officials conceded the hastily planned ramp-up led to many soldiers not receiving pay or receiving incorrect pay, and the situation took months to sort out.

The mission has since dropped to about 5,400 troops deployed to assist at the Mexico border. They are tasked with assisting state police to prevent illegal activity between the ports of entry.