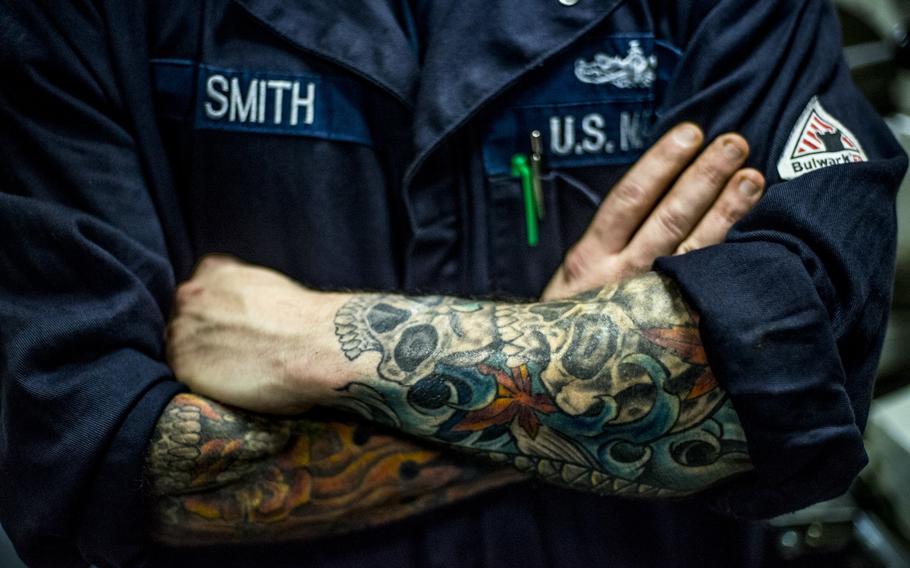 Machinery Repairman 1st Class Brandon Smith from Fort Scott, Kan., poses in 2016 for a photo aboard the aircraft carrier USS Ronald Reagan. Tattoo policies in the military need to be updated to provide better guidance on how recruits and service members can request waivers for unauthorized body ink, according to a Government Accountability Office report published Wednesday, Aug. 17, 2022. (Ryan McFarlane/U.S. Navy)

WASHINGTON — Tattoo policies in the military need to be updated to provide better guidance on how recruits and service members can request waivers for unauthorized body ink, according to a new government watchdog report.

All six service branches have policies dictating the content, size and location of allowable tattoos, but information on whether exceptions are available for certain tattoos can be difficult to find, the Government Accountability Office wrote in a report published Wednesday.

“Each armed force, except for the Navy, allows waivers for certain tattoo restrictions for service members, but their respective policies generally do not document this possibility clearly,” the report stated. “Clear guidance on waivers for unauthorized tattoos would provide consistent information about requirements for waiver requests and conditions for approval.”

Congress commissioned the report last year to explore whether tattoo policies in the military had a direct effect on recruitment and retention. The watchdog wrote it was unable to make that determination because the armed forces did not have tattoo-specific data.

Recruitment problems have plagued each of the service branches and became particularly pronounced this year when the Army projected it would fall short of its recruiting and retention goals during the next two years by tens of thousands of troops.

The Army loosened its tattoo policy in June to allow ink on hands, behind ears and behind necks, matching rules enacted by the Navy in 2016. Army officials said they made the move to help recruiters avoid a lengthy waiver process for bringing enlistees with body art into the service.

Recruiters filed about 650 tattoo regulation waivers between October and May, according to the Army. Approvals for the waivers take at least two weeks.

Current policies throughout the military allow tattoos almost anywhere except on the head and face, according to the report.

Military officials said they update tattoo rules based on general discussions, studies of tattoo prevalence among young people and other tattoo-related information, according to the report. Policies have become less restrictive as tattoos have become more common.

The watchdog recommended each service branch update their written policies to include information on whether waivers are available and the process for obtaining them. The Defense Department and the military services agreed with the recommendations, according to the report.