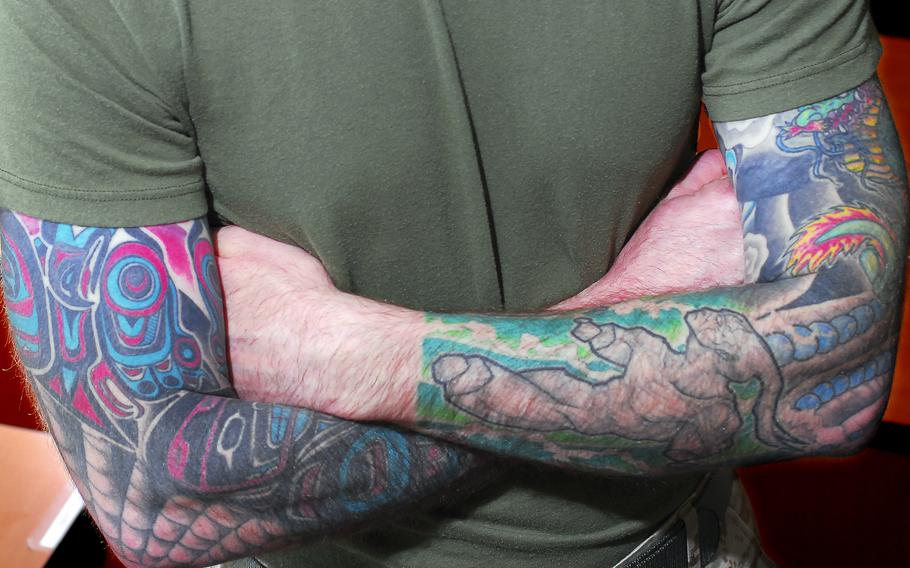 The Marine Corps banned sleeve tattoos in 2007, just as they had reached peak popularity in the United States. The service announced it was reversing that decision on Friday, Oct. 29, 2021. (U.S. Marine Corps)

Marines are once again allowed to cover most of their arms and legs with so-called “sleeve tattoos” under a revised policy announced Friday by the Marine Corps.

At the same time, the updated policy expands the definition of tattoos forbidden as “extremist.”

The Marines banned sleeve tattoos in 2007, just as they had reached peak popularity in the United States.

“The tattoo policy over the years has attempted to balance the individual desires of Marines with the need to maintain the disciplined appearance expected of our profession,” said the bulletin issued by Commandant Gen. David Berger. “This Bulletin ensures that the Marine Corps maintains its ties to the society it represents and removes all barriers to entry for those members of society wishing to join its ranks.”

Tattoos on the head and neck remain banned, according to the announcement, which warns Marines that body art choices could still affect future career options in the Corps.

“Officer and Enlisted Marines may continue to be assigned or allowed to serve on Special Duty Assignment (SDA), although assignment to ceremonial and other high visibility units may be Restricted,” the announcement said.

The Defense Department has been taking a harder look at extremism within the ranks in the wake of the Jan. 6 mob assault on the U.S. Capitol, which included active-duty service members and veterans. The ban on extremist tattoos includes any that symbolize philosophies or organizations that advocate racial, gender or ethnic hatred.

Also banned are tattoos that “advocate violence or other unlawful means of depriving individual rights under the U.S. Constitution and federal or state law” or that “advocate, engage in, or support the forceful, violent, unconstitutional, or otherwise unlawful overthrow of the government of the United States, any state, commonwealth, district, or territory of the United States.”

It also bans ink that encourages military personnel to disobey lawful orders “for the purpose of disrupting military activities.” 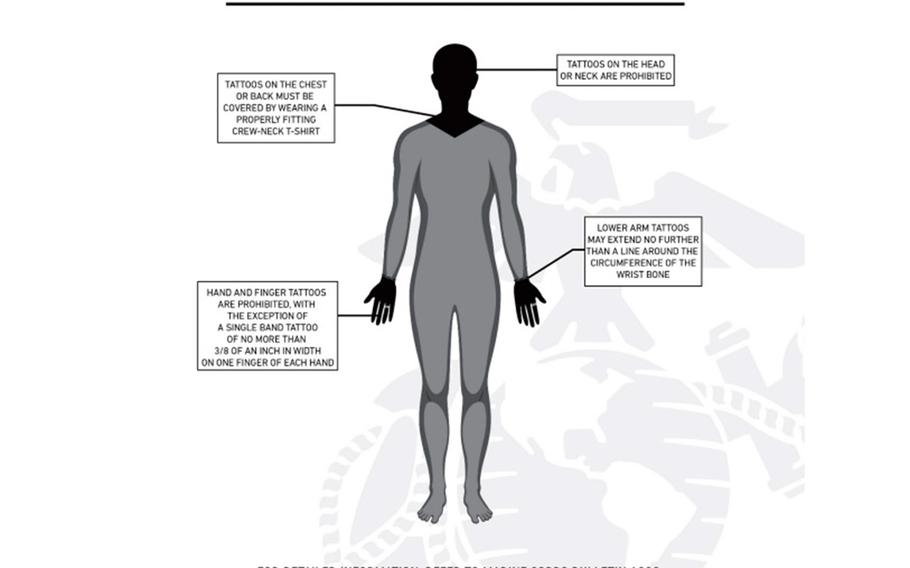 Marines are allowed once again to cover most of their arms and legs with so-called “sleeve tattoos” under a revised policy announced by the Marine Corps on Friday, Oct. 29, 2021. (U.S. Marine Corps)

The Marine Corps last updated its tattoo policy in 2016, which left some Marines disappointed that the sleeve restriction was left in place. The Navy had moved earlier that year to allow sailors to sport sleeve tattoo, following an Army decision the year before to allow them for soldiers.

Cpl. Jasper Piala launched an online petition last year calling on the Marines to allow tattoo sleeves, and as of Friday the petition had garnered more than 78,000 signatures.

“The current tattoo regulations are discriminating against Marines with a desire for ‘sleeve’ tattoos,” Piala wrote on Change.org, adding that the rules have a negative impact on morale, retention and equal opportunity.

“Competent and decorated Marines in the past and present who have proven to be an asset for the Marine Corps have been denied reenlistment and advancement in their field due to increasingly restrictive tattoo regulations,” he wrote.