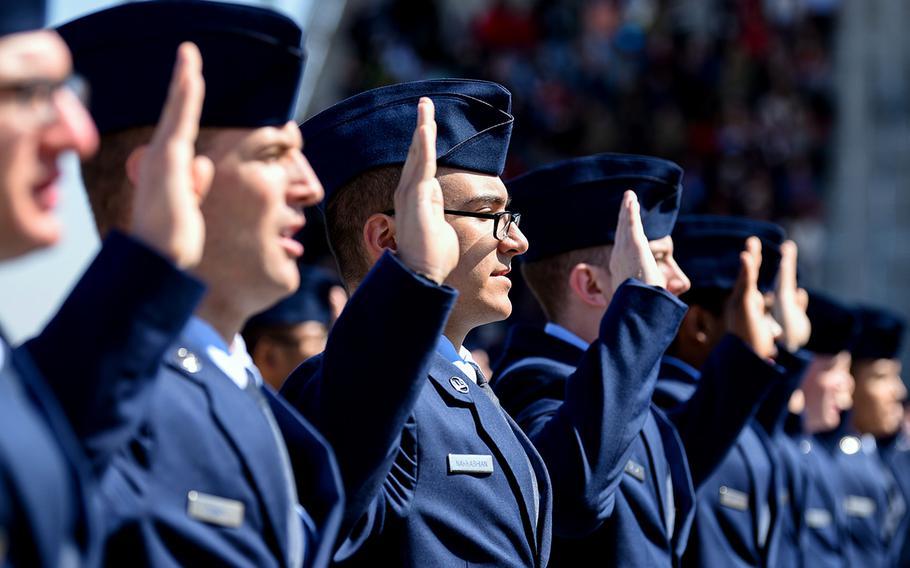 More than 700 Airmen and Guardians assigned to the 320 Training Squadron graduated March 10, 2022, from basic training at Lackland Air Force Base, Texas. Maj. Gen. Ed Thomas, the head of of the service’s recruitment command, who reviewed the ceremony, says the Air Force is facing its biggest recruiting challenge in decades. (Miriam Thurber/U.S. Air Force)

From the Suwalki Gap to the Taiwan Strait, the U.S. military faces no shortage of potential crises. But perhaps its biggest challenge lies close to home: A dwindling number of Americans are able and willing to serve in uniform. To maintain the military’s edge, the Pentagon needs to rethink how it recruits and retains troops — while also preparing to fight future wars with a leaner active-duty force.

On current trends, the outlook is troubling. To meet its overall goal of an active-duty force of 1.3 million, the military needs to bring in roughly 150,000 new recruits across its six service branches. With two months left in the fiscal year, the Pentagon is still 15% short of that goal, with the largest service, the Army, facing the biggest shortfall. Through the end of June, the Army had signed up 22,000 troops, 60% below its annual target. It could end the year with as few as 445,000 troops, nearly 40,000 smaller than the force size authorized by Congress.

A tight labor market is one reason for this state of affairs, but the bigger problem is the shrinking pool recruiters are drawing from. Because of rising rates of youth obesity and drug use, the share of Americans aged 17 to 24 who are eligible to serve without a waiver has fallen to 23%. Discounting those already enrolled in college, the number is only 12%. The military estimates that among those who are eligible, a mere 9% have a “propensity” to serve, the lowest since 2007, during the height of the Iraq War.

To fill the gap, the Army is offering $35,000 bonuses to recruits willing to start basic training within 45 days and allowing enlistees to choose where they’re stationed. The service has also expanded short-term enlistment options, giving some new soldiers the option of two years of active duty rather than the standard four.

While boosting incentives to attract high-quality recruits makes sense, other proposals — such as relaxing physical fitness standards or making it easier for recruits to obtain waivers for prior drug use or medical conditions — risk undermining readiness and discipline. Creating a boot camp for applicants who perform poorly on the Armed Forces Qualification Test may help low-aptitude candidates meet the minimum threshold for service, but it threatens to degrade the military’s overall competence.

Rather than lowering its standards, the Pentagon can take a more pragmatic approach. Greater priority can be given to retaining troops once they enlist, as the Marines have done. Financial bonuses, faster promotion opportunities, and incentives for obtaining new skills would encourage troops to consider longer military careers. The Pentagon can also broaden its pool of potential enlistees by stationing more recruiters in communities with low levels of military participation.

Despite such efforts, the U.S. may well have to do more with less in the years ahead. Investments in unmanned weapons systems, artificial intelligence and higher-precision munitions have the potential to reduce manpower requirements. Greater collaboration with the private sector and smarter use of commercial technologies would allow the Pentagon to turn over more technical tasks, such as IT services, to civilian employees and contractors. The U.S. should also press regional allies, particularly its NATO partners in Europe, to contribute more to collective defense.

Combating the threats to global order requires an American military that’s second to none. Keeping seasoned service members in uniform while harnessing the promise of new technologies can help the U.S. overcome its recruiting challenges without sacrificing the military’s core strengths.

Michael R. Bloomberg is the founder and majority owner of Bloomberg LP, the parent company of Bloomberg News, U.N. Special Envoy on Climate Ambition and Solutions, and chair of the Defense Innovation Board.