US weapon stockpiles worry some lawmakers as Ukraine war rages on 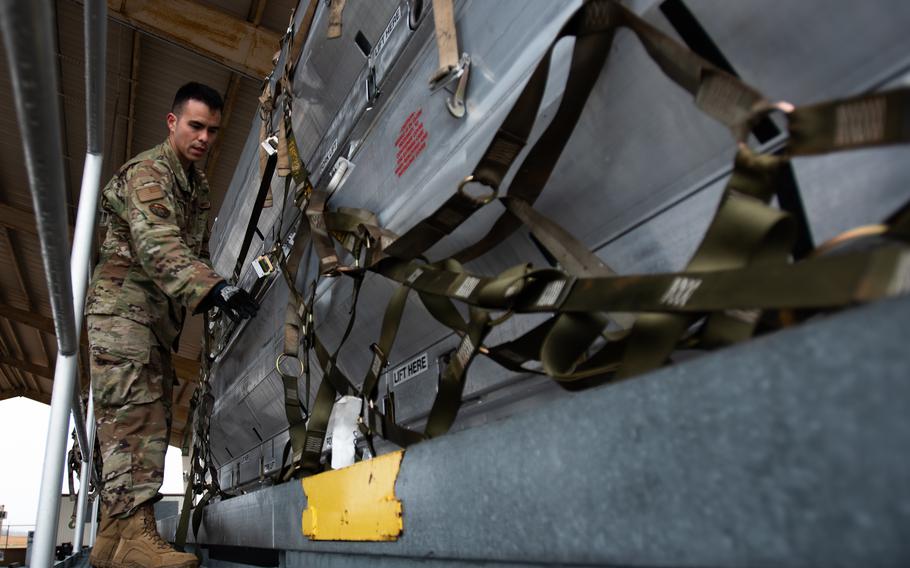 WASHINGTON — The prospect of arming Ukraine for a protracted war with Russia raised concerns among some senators on Tuesday that repeated raiding of U.S. weapon stockpiles and slow replenishment could leave the American military empty-handed.

Shipments to Ukraine of weapons such as Javelin anti-tank missiles and Stinger anti-aircraft missiles have cut into the Pentagon’s inventory by about one-third, according to estimates by some lawmakers and experts during a Senate Armed Services Committee hearing.

Restocking them will likely take several years, they said.

“I think we have lost the luxury of time here, the closet is bare,” said Sen. Richard Blumenthal, D-Conn. “The decisions we make now will determine the outcome [of the war] because these weapons will not magically appear for us or our allies or Ukraine.”

Blumenthal has been a vocal supporter of invoking the Defense Production Act to fund and sustain a higher rate of munition production. He noted it would take a year to boost production of Javelins and 32 months to restock them unless President Joe Biden invokes the act. The weapon has proved crucial for the Ukrainians in repelling Russian forces.

“The challenge is extraordinary and requires this kind of commitment,” Blumenthal said.

David Berteau, the leader of the trade association Professional Services Council, told senators that he has not seen a single contract in place to start replenishments. The council represents service contractors that work with the government.

If the U.S. keeps pulling weapons from inventories at its current rate, stocks could be depleted within six months, he said. The White House authorized two $800 million military aid packages to Ukraine in recent weeks, though the last package does not include Javelins and Stingers.

“There is no way contractors are going to deliver replacements in less than [six months] even if we started today,” Berteau told senators. “We’re behind and you guys should push them to hurry up.”

Ellen Lord, a former undersecretary of defense for acquisition and sustainment, said the U.S. has sent about one-quarter of its Stinger supplies to Ukraine. She warned senators that longtime failures by the U.S. to invest in infrastructure necessary for maintaining production capacity will lead to replenishment lags of three to five years.

One of the tools to correct that neglect is the Defense Production Act, Lord said.

“It allows the Department [of Defense] to move money to industry to actually make the capital investments or train the workforce or develop the supply chain,” she said. “That’s where you can really move the needle on this issue.”

The defense industry needs a clear signal to proceed with production, Lord said, including multiyear contracts for weapons. She also proposed the U.S. share more technical knowledge with U.S. allies such as Australia to speed up munition manufacturing. Firms are still grappling with supply chain issues and employee shortages sparked by the coronavirus pandemic, she said.

“Our Ukraine experience has shown how we can hope to carry out policy to provide specific munitions to support and then realize that we have not provided funding to keep manufacturing lines hot and supply chains intact and will therefore have significant delays in shipping desired quantities of specific weapons systems,” Lord said.

Mark Cancian, a retired Marine colonel and senior adviser at the Washington think tank Center for Strategic and International Studies, said in an interview this month that he expects the U.S. to eventually slow down shipments of Javelins as stocks decrease.

“At some point, I think the U.S. military is going to put the foot down and say sending more will endanger our ability to execute our war plans,” he said.

“We’re still meeting our mission requirements for Javelins, so we’re not breaking any of those red lines,” Milley told the House Armed Services Committee this month.

The latest security aid to Ukraine is tailored for the flat terrain of the eastern region of Donbas and includes heavy weaponry such as howitzers, tactical vehicles and artillery rounds. President Biden said this month that the U.S. is prepared to continue sending munitions to Ukraine despite the pace of consecutive shipments.

“We have the capacity to do this for a long time,” he said.

Congress plans to take up a supplemental budget bill this week to fund additional pulling of weapons and equipment for the war in Ukraine. The White House has nearly exhausted the $3.5 billion that lawmakers allocated for dipping into weapons stockpiles for the fiscal year, which ends Sept. 30.

Sen. Jack Reed, D-R.I., chairman of the Armed Services Committee, said issues with planning and manufacturing flexibility are evident in the lack of rapidly scalable production capacity for weapons such as Stingers and Javelins. The U.S. and the defense industry need to vastly improve how they identify defense needs and deliver them, he said.

“This is being tested right now as we work to backfill our stockpiles following the enormous transfer of weapons to Ukraine,” Reed said.