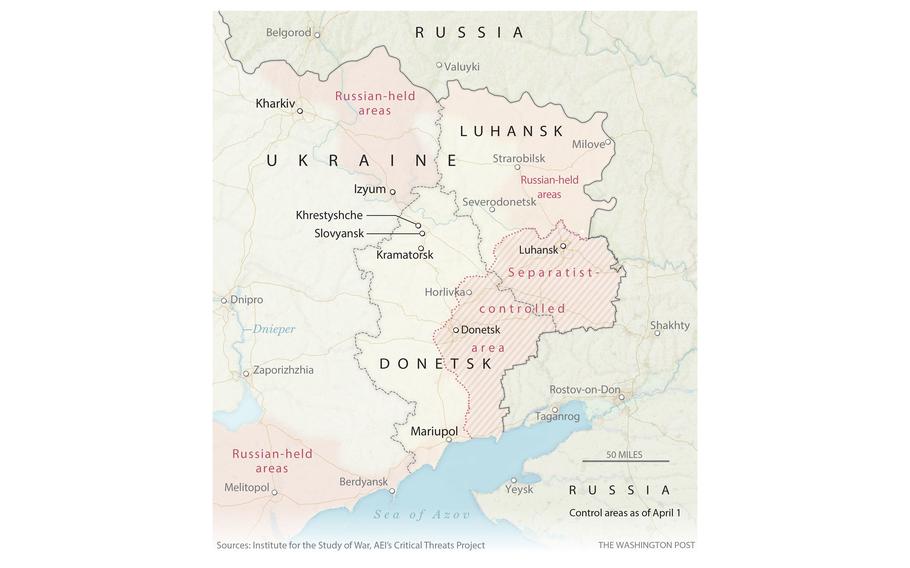 Ukraine is bracing for a new and potentially more challenging phase in its war to repel Russia's invasion as the battles shift east to new terrain that could give more of an advantage to the Russians.

The wide open spaces will make it harder for the Ukrainians to run guerrilla operations as they did in the forests of the north and west and play to Russia's ability to muster large mechanized formations of tanks and armored vehicles.

But much will depend on whether the Russians can rectify the mistakes they made in the first phase of their invasion, ranging from the failure of supply lines, logistical challenges and poor planning to using insufficient manpower for the size of the area they were attempting to seize, analysts say.

That the Ukrainians have not only managed to hold the Russian army at bay but also forced its troops into a humiliating retreat from the north of the country is testament both to their fighting ability and to the Russians' poor performance so far, experts say.

Russian forces have now completely withdrawn from the areas around Kyiv and Chernihiv in the north, where their attempt to launch a sweep into the capital was thwarted by fierce Ukrainian resistance, U.S. officials say. Those troops are in the process of being refitted and resupplied, apparently for redeployment to the east, the Pentagon says.

In one sign that Russia is trying to fix some of the problems it initially encountered, the Russians have appointed a general with extensive experience in Syria and the Donbas to oversee the war effort, marking the first time a single commander has taken control of the entire Ukraine operation, a senior U.S. official said Saturday, speaking on the condition of anonymity. The appointment of Gen. Alexander Dvornikov, the commander of Russia's southern military district, signals an attempt by Moscow to bring some coherence to what military experts describe as a chaotically executed operation so far that has taken the lives of seven generals.

The new focus of the battle is expected to be the Donbas region, which has been contested since Russia invaded in 2014 and seized a portion of the oblast, or province. Ukraine has since been fighting to maintain control of the rest of the area, and some of its best and most battle-hardened troops are stationed there.

The Russians are widely expected to attempt to push south from the Kharkiv area and north from the city of Donetsk to encircle the Ukrainian troops in Donbas, maneuvers that will play to Russia's numerical superiority in terms of tanks and armored vehicles. In recent days, Ukrainian military officials said, the Russians have begun pushing south from the town of Izyum toward Slovyansk, with the aim eventually of seizing Kramatorsk, the capital of the Donetsk and site of the missile attack on a train station that killed over 50 people on Friday.

The Ukrainians could find themselves confronting a tougher fight in the terrain of the east than they did in the forested north, analysts say. There, trees provided cover for lightly armed fighters to sneak behind Russian lines to fire at tanks and armored vehicles, using anti-tank weapons such as the Javelins supplied by the United States that have helped tilt the war in Ukraine's favor.

The battles in the east will look more like those of "the Second World War, with large operations, thousands of tanks, armored vehicles, planes, artillery," Ukraine's foreign minister told NATO last week, making an appeal for urgent supplies of new and different kinds of arms.

"The fight down in the southeast, the terrain is different than it is in the north. It is much more open and lends itself to armor mechanized offensive operations on both sides," Gen. Mark A. Milley, chairman of the Joint Chiefs of Staff, told a congressional hearing last week. The Ukrainians need additional armor and artillery, he said. The United States is looking to NATO allies to come up with the right equipment because the kind used by the United States would require months of training for the Ukrainians to learn how to use, he said.

Fighting in the east also will require the Ukrainians to adopt different tactics to those they used around Kyiv, where they were able to blunt and ultimately reverse the Russian assault.

The Ukrainians were able to fight a guerrilla-style war against advancing columns of Russian armor that were confined to the roads because of mud and trees, contributing to the buildup of vehicles that formed the infamous 40-mile convoy turned traffic jam. The onset of warmer weather will further help Russia by giving its armored formations greater freedom of movement.

"This time around the Ukrainians will need to be moving in open country where they can easily be spotted," said Jack Watling of the London-based Royal United Services Institute. "They will be in combat battles where both sides see each other, and if they are not in armored vehicles they will be vulnerable."

The logistical problems that Russia encountered in its initial push into Ukraine should be less of an issue in the east, Watling said, because Russia already occupies part of the Donbas region, which directly borders Russia, making it easier to send supplies directly from Russia.

The Russians have had time to adjust to the reality of Ukraine's ability and will to resist Russian advances, he said. "They know what they are up against, and their supply lines will be shorter", he said.

Russia can meanwhile draw on vast quantities of mechanized armor including tanks and armored vehicles, where it possesses a clear advantage over the smaller Ukrainian army, said retired Gen. Philip Breedlove, a former supreme allied commander of NATO. Russia also possesses artillery systems that have longer ranges than Ukrainian weapons, creating difficulties for Ukrainian forces when they face each other, said Breedlove, who is now with the Middle East Institute.

Many observers doubt, however, that Russia's already-exhausted and depleted forces have the strength to take much more territory from Ukraine any time soon. Russia has mobilized 60,000 reservists and is assembling new battle units to replace those lost over the past few weeks, but it will take time to equip and train them, said Phillips O'Brien, professor of strategic studies at St Andrews University.

Russia committed 75 percent of its combat-ready forces to the initial invasion, and its best troops have already been fighting. They are exhausted, demoralized and depleted by equipment losses they have suffered, he said.

The new environment "is not a game-changer," said Watling. "It depends on whether the Russians are tactically up for it, and they've been pretty inept so far."

The Russians have now had a chance to adjust to the reality that the Ukrainians are likely to put up a fierce fight, and can be expected to adjust their tactics accordingly, said Mick Ryan, a recently retired Australian general who has been studying the war.

"However, the Ukrainians have been better and faster at adapting and are so far winning this adaptation battle," he said.

The Washington Post's Dalton Bennett in Dnipro, Ukraine, contributed to this report.