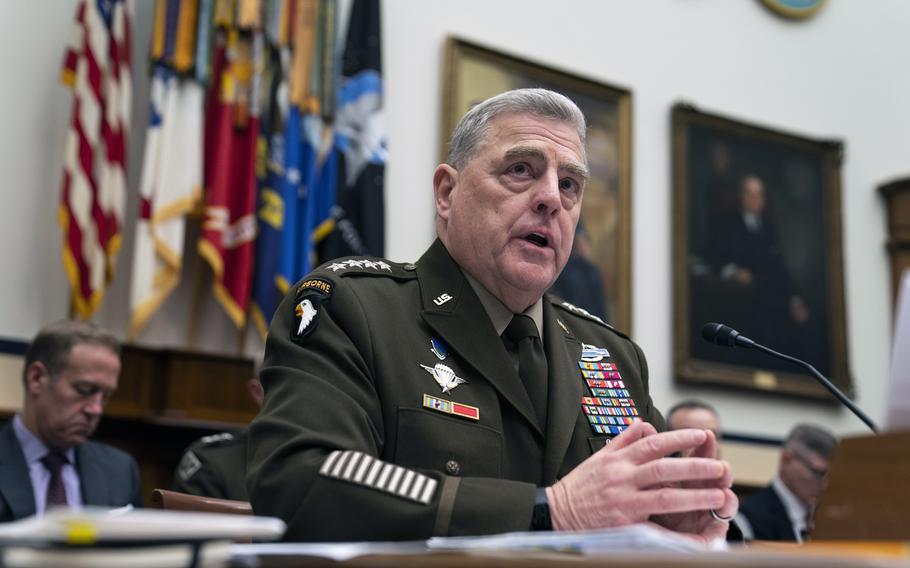 Army Gen. Mark Milley, chairman of the Joint Chiefs of Staff, told lawmakers heightened American military “presence is always a good deterrent” against enemy aggression, telling them that he favored rotating more units in and out of Europe to a permanent boost of U.S. force strength on the Continent. His comments to the House Armed Services Committee come after Air Force Gen. Tod Wolters, the commander of all U.S. and NATO forces in Europe, told senators last week that he suspected the United States could need to station more troops on the Continent.

“My advice would be to create permanent bases but don't permanently station [U.S. troops on them] so you get the effect of permanence by rotational forces cycling through permanent bases,” Milley said during a hearing alongside Defense Secretary Lloyd Austin to examine the Pentagon’s $773 billion fiscal year 2023 budget request sent to Congress last week. “You get the effective, permanent presence of forces, but the actual individual soldier, sailor, airman, Marine is not permanently stationed there for two or three years.”

NATO allies are “very, very willing” to build and pay for permanent U.S. bases along the alliance’s eastern flank, Milley said. He told lawmakers countries including Lithuania, Latvia, Estonia, Poland and Romania have expressed such interest — especially in the wake of Russia’s brutal and ongoing invasion of Ukraine, which was launched Feb. 24.

The number of American troops in Europe more than doubled since Russian President Vladimir Putin ordered his forces into Ukraine. There are about 102,000 U.S. troops now on the Continent, according to the Pentagon. The new forces — including two armored brigade combat teams, an airborne infantry brigade and fighter jets all from the United States — have flowed in on temporary deployments to train with NATO partners and defend alliance territory.

The United States in recent years has regularly rotated one armored brigade with tanks, armored infantry vehicles and self-propelled howitzers to Europe, but defense officials have considered adding more firepower on the Continent.

Milley argued Tuesday that rotating units in and out of Europe saves taxpayer money and is easier on troops and their families. Rotational forces do not require massive investment in permanent family moves, on-post shopping and dining facilities and family housing, he said. Rotational forces also have been used in South Korea and the Middle East in recent years. 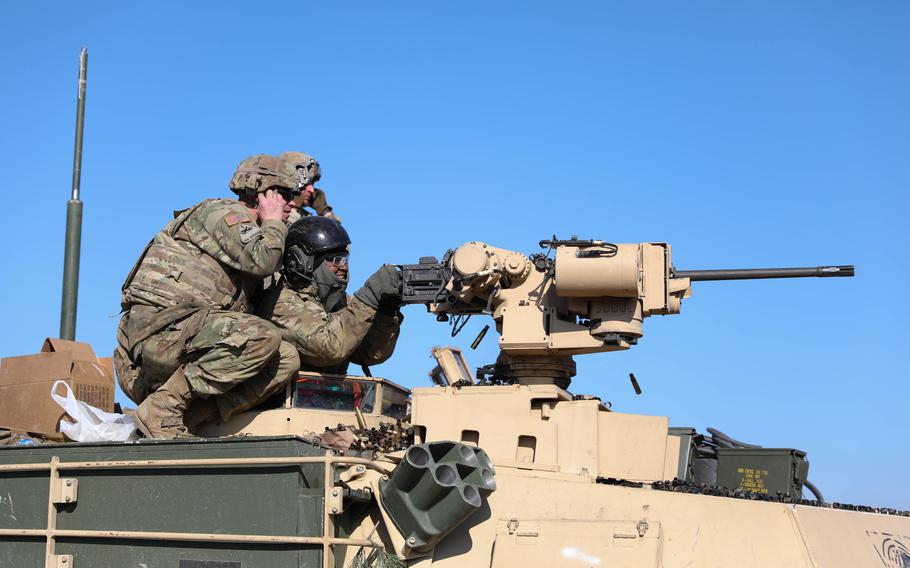 Final decisions about permanent U.S. force posture in Europe have not been decided, Milley said, adding NATO allies were involved in the ongoing discussions.

Milley said permanently bolstering U.S. forces in Europe would be especially important because he believes fighting in Ukraine, where Russian military failures have forced Moscow to change tactics and perhaps its goals, could drag on for years. The Pentagon has said in recent days that Russia appears to be abandoning at least some efforts to seize Ukrainian capital Kyiv, where it initially hoped to oust the West-aligned democratic government quickly and install a Kremlin-allied administration.

"I do think this is a very protracted conflict, and I think it's at least measured in years,” he said. “This is a very extended conflict that Russia has initiated, and I think that NATO, the United States, Ukraine, and all of the allies and partners that are supporting Ukraine are going to be involved in this for quite some time."

Lawmakers were divided, largely along party lines, in their assessments of President Joe Biden’s Pentagon budget proposal released March 28 — the highest dollar amount ever sought by the Defense Department. Republicans, generally, criticized the budget as too small to keep up with record inflation and compete with new technological capabilities posed by the militaries of China and Russia. Democrats largely defended the request, which included the Pentagon’s largest-ever proposed research, development, testing and evaluation investment and a 4.6% pay boost for troops and Defense Department civilian employees.

Republicans also worried the budget request did not reflect the new realities created by a full-scale war in Ukraine. The top Republican on the committee, Rep. Mike Rogers of Alabama, criticized the request as “extremely short sighted” because it did not add new funds to pay for the massive increase of troops in Europe or add significant investment to provide new weapons to Ukraine.

Pentagon officials said last week that the request was finalized before Russia invaded Ukraine, and they could not have updated the submission without substantial delay.

The committee’s chairman, Rep. Adam Smith, D-Wash., pointed out Congress just last month approved $14 billion in new security assistance which will provide Ukrainian forces anti-tank and anti-aircraft missiles that have been critical to their battlefield successes. It will also provide drones, secure tactical radios and other assets, Austin said Tuesday.

Austin and Milley defended Biden’s budget request. Austin said it would allow the U.S. military to “maintain its edge” over competitors such as China and Russia without “taking that edge for granted.” Milley called it “a major step in the right direction.

The Pentagon leaders also defended against accusations the Defense Department has failed to foresee issues since Biden became president, including the Taliban’s rapid takeover of Afghanistan last year and Putin’s invasion of Ukraine.

“You guys told us that Russia couldn’t lose, you told us that the Taliban couldn’t immediately win, and so I guess I’m wondering — what in the $773 billion that you're requesting today is going to help you make assessments that are accurate in the face of so many blown calls?” Rep. Matt Gaetz, R-Fla., asked in a heated back-and-forth exchange with Austin in which he accused the leaders of failing to deter Russia and allowing the U.S. military to fall behind its adversaries.

“This is the most capable, the most combat-credible force in the world,” Austin responded, raising his voice. “It has been, and it will be going forward. This budget helps us to do that.”

“I’m embarrassed by your leadership,” Gaetz responded, accusing Austin and Milley of prioritizing “wokeism” — a term that means alert to societal injustices including racism — over preparing them to fight. He accused them of being ill-prepared for the Russian invasion of Ukraine and making incorrect assessments that Moscow would overtake the country in mere weeks.

“Has it occurred to you that Russia has not overrun Ukraine because of what we’ve done, and our allies have done?” Austin retorted, in reference to the years of training U.S. troops have provided Ukrainian forces and the weapons American has provided them. “Have you ever even thought about that?"