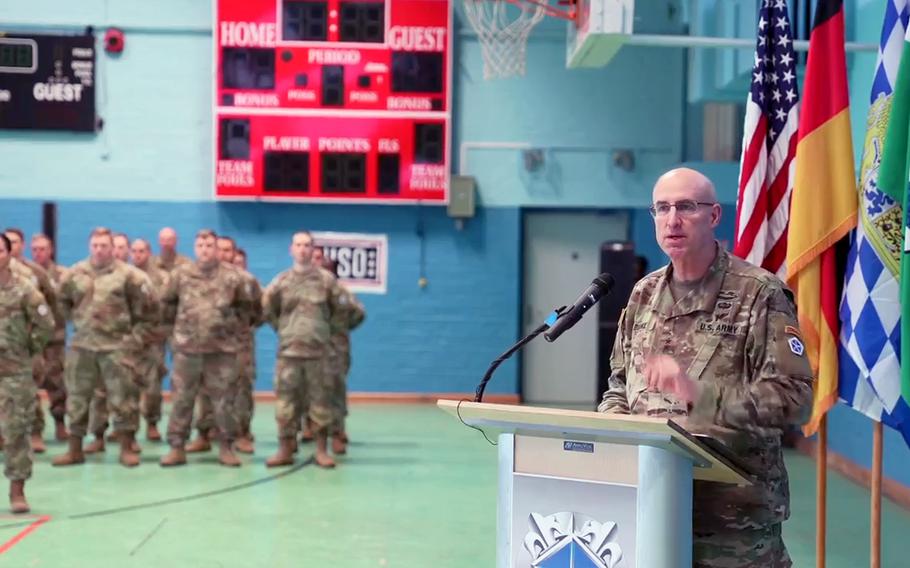 STUTTGART, Germany — A contingent of V Corps soldiers uncased their unit colors Tuesday in Ansbach, marking a return to Germany for the headquarters as it helps coordinate Army efforts along NATO’s eastern flank.

Once a mainstay in Germany during the Cold War, the unit is now carrying out its mission temporarily in Ansbach.

“Throughout our unit’s history, we have stood as guardians of peace in Europe, and we once again proudly answer the nation’s call,” V Corps commander Lt. Gen. John Kolasheski said Tuesday in a statement.

German officials at the ceremony extended a welcome to the incoming soldiers.

“The speed with which American forces have arrived in Europe these past weeks have lifted spirits and given hope in many countries,” said Johannes Urban, a representative of the Bavarian governor’s office. The V Corps colors are uncased April 5, 2022, at a ceremony in Ansbach, Germany. The Ukraine crisis prompted the Pentagon to order 300 additional V Corps soldiers to Europe, with some taking up a temporary position in the Bavarian city. (Facebook/V Corps)

The command operates on a permanent basis out of Fort Knox, Ky., and also at a forward headquarters in Poland.

In November, V Corps was declared “fully operationally capable” by the Army, which revived the unit to support a growing U.S. Army Europe and Africa mission.

That mission has grown further as the Pentagon puts thousands more forces in Europe to strengthen NATO amid the Russia-Ukraine war, which began with a full-scale invasion Feb. 24.

V Corps’ tasks involve managing the day-to-day operations of soldiers maneuvering up and down NATO’s eastern flank, stretching from the Baltics in the north to Romania and Bulgaria in the south.

V Corps’ history in Europe dates to World War I. The unit was deactivated in 2013 as part of the Army’s gradual drawdown in Europe.

The United States has been reversing its European military drawdown in the years since 2014, when Russia seized the Crimean Peninsula from Ukraine by force and began fomenting a separatist rebellion in eastern Ukraine.