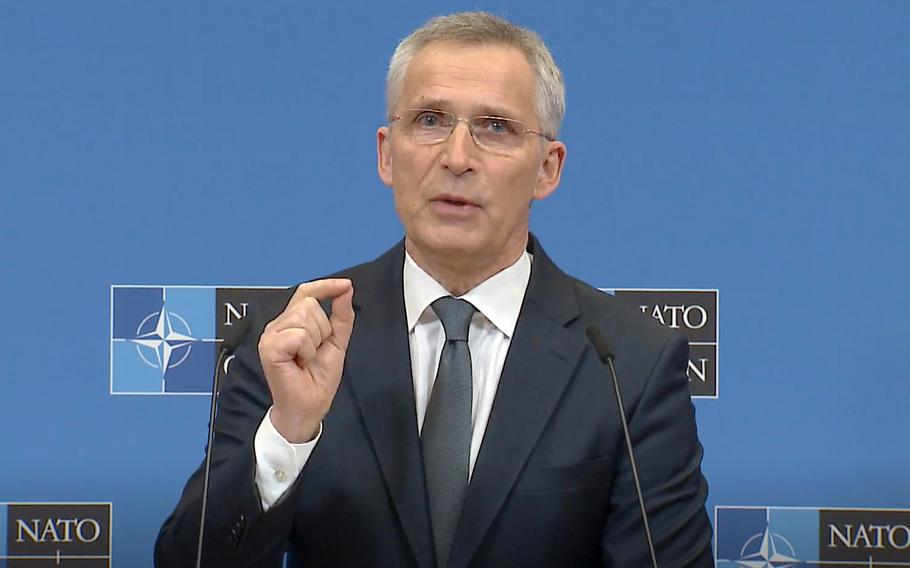 NATO Secretary-General Jens Stoltenberg speaks to reporters at the organization's headquarters in Brussels, April 5, 2022, ahead of Wednesday's foreign ministerial meeting, which U.S. Secretary of State Antony Blinken will attend. (NATO)

Russian forces are regrouping for a new offensive in Ukraine aimed at gaining enough ground to connect the occupied Crimean Peninsula with separatist-controlled territory in the eastern Donbas region, NATO’s official said Tuesday.

Secretary-General Jens Stoltenberg, speaking on the eve of a meeting of foreign ministers in Brussels, said the withdrawal of Russian forces from areas around Kyiv is part of a strategy shift for the Kremlin and represents a new phase of the war.

“In the coming weeks, we expect a further Russian push in eastern and southern Ukraine to try to take the entire Donbas and to create a land bridge to occupied Crimea,” Stoltenberg said. “So this is a crucial phase of the war.”

The shift was prompted by Russian President Vladimir Putin’s failure to achieve his initial objective of capturing Kyiv, Stoltenberg said.

Allies will need to ready plans to resupply Ukrainian forces with more weapons in preparation for the upcoming battle in the east, he said.

In the days since Russia has pulled back troops back from towns in the vicinity of Kyiv, scores of dead civilians — some bound and shot at close range — have been observed on streets and buried in ditches. Stoltenberg condemned the scenes, saying Russia was to blame for the atrocities and that those responsible must be held to account. 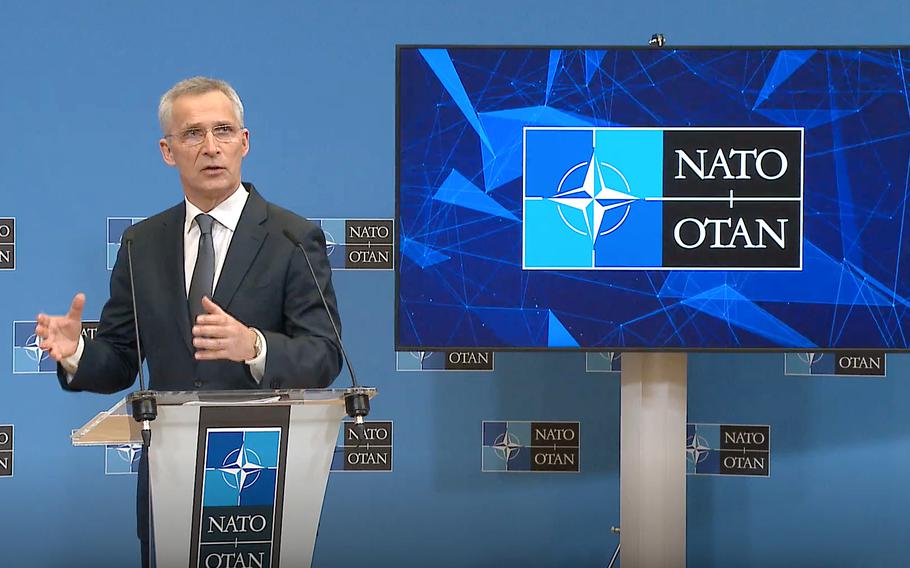 NATO Secretary-General Jens Stoltenberg answers a question during a press conference at the organization's headquarters in Brussels, April 5, 2022, ahead of Wednesday's foreign ministerial meeting, which U.S. Secretary of State Antony Blinken will attend. (NATO)

“We have all seen the horrific images of murdered civilians in Bucha and other places, controlled by the Russian military until a few days ago,” Stoltenberg said. “This is unbearable brutality that Europe has not witnessed in many decades. “

U.S. Secretary of State Antony Blinken will be among the leaders in Brussels on Wednesday and Thursday for talks, which will center on the types of weaponry allies can hurry into Ukraine as well as how to respond to Russia’s alleged atrocities.

Already, allies have sent in billions of dollars in arms, including anti-tank Javelin systems and Stinger anti-air missiles.

“Allies are determined to provide further support to Ukraine, including anti-tank weapons, air-defense systems and other equipment,” Stoltenberg said.

Allies have a narrow window to get more weapons into Ukraine while Russian troops rearm and resupply in Belarus, he said.

In addition to allied foreign ministers, Ukraine Foreign Minister Dmytro Kuleba and leaders from Australia, Japan and South Korea are scheduled to join the talks.

“This crisis has global implications, which concerns us all,” Stoltenberg said. “We see that China has been unwilling to condemn Russia’s aggression. … At a time when authoritarian powers are pushing back on the rules-based international order, it is even more important for democracies to stand together.”