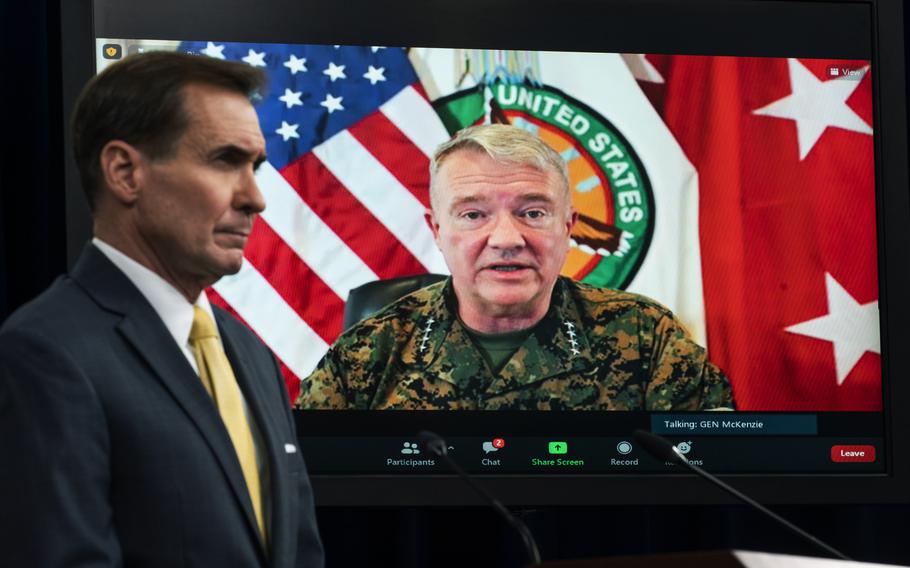 Commander of U.S. Central Command Gen. Frank McKenzie appears on screen from MacDill Air Force Base, in Tampa, Fla., where he spoke about Afghanistan on Aug. 30, 2021, during a virtual briefing moderated by Pentagon spokesman John Kirby at the Pentagon. The Pentagon retreated from its defense of a drone strike that killed multiple civilians in Afghanistan last month, announcing Friday, Sept. 17, that only civilians were killed in the attack, not an Islamic State extremist as first believed. (Manuel Balce Ceneta/AP)

Ten civilians, including seven children, were killed in the Aug. 29 drone strike in Kabul that military leaders had said destroyed a car filled with explosives driven by an Islamic State terrorist, the top U.S. general in the Middle East said Friday.

McKenzie said it is unlikely any ISIS terrorists were killed in the strike and they are considering reparations for the families of the victims.

CENTCOM recently opened a high-level command investigation and a civilian casualty assessment into that strike after The New York Times reported the strike conducted in the waning days of U.S. involvement in the Afghanistan war actually killed a local worker for a U.S.-based aid company and up to 10 nearby civilians.

The Reaper drone strike was the last known airstrike launched by American forces in Afghanistan before the final U.S. troops pulled out of Kabul just before midnight Aug. 31. Defense officials in announcing the strike Aug. 29 said it had disrupted an imminent suicide attack against Hamid Karzai International Airport. The U.S. military used the Kabul airfield to lead an about two-week effort to evacuate Americans and their allies, including Afghans, from the country after the Taliban takeover Aug. 15.

“I offer my profound condolences to the family and friends of those who are killed,” McKenzie said. “This strike was taken in earnest belief that it would prevent an imminent threat to our forces and the evacuees at the airport, but it was a mistake. And I offer my sincere apology. As the combatant commander, I am fully responsible for this strike in this tragic outcome.”

The drone strike came just days after a suicide bomber with ISIS-Khorasan — Afghanistan’s ISIS affiliate known as ISIS-K — blew himself up just outside the airport, killing 13 American service members, wounding nearly two dozen more and killing and maiming hundreds of Afghans crowded around the airfield’s gates. U.S. officials at that time were on high alert about the potential for another terrorist attack on the airport and warned publicly such an assault was likely imminent.

“We now know that there was no connection between [the local worker] and ISIS-Khorasan, that his activities on that day were completely harmless and not at all related to the imminent threat we believed we faced,” Defense Secretary Lloyd Austin said in a prepared statement. “We apologize, and we will endeavor to learn from this horrible mistake.”

Austin announced he has directed a review of the investigation completed by CENTCOM.

A CENTCOM statement just after the strike claimed it caused secondary explosions, indicating explosives were inside the car. However, the investigation found the secondary explosion was caused by a propane tank located behind the white Toyota Corolla that was hit with a missile at about 4:51 p.m. on Aug. 29, McKenzie said.

“Clearly our intelligence was wrong on this particular white Toyota Corolla,” he said.

Intelligence gathered by U.S. personnel led the military to a vehicle of that make and model as a key element of the next attack, and this particular Corolla was at a location of interest, the general said. It’s now known that the compound included offices of Nutrition and Education International, a nonprofit based in California that works to fight malnutrition in places such as Afghanistan.

Without forces on the ground, the military used drones to track the vehicle for about eight hours, watching while the car moved throughout Kabul. As many as four men came and went from the car with bags and jugs.

Once it stopped about 1.8 miles from the airport, the strike was authorized. At that time, one man was inside the vehicle and another outside in the vicinity of the car. A review of footage following reports of civilian casualties showed other forms could be seen moving throughout the compound.

“This led to my initiation of an investigation within 24 hours of the strike. A comprehensive review of all the available footage, and reporting on the matter, led us to a final conclusion it as many as 10 civilians were killed in the strike, including up to seven children,” McKenzie said.

The general said he regretted the strike, but he noted the intense self-defense posture that decision-makers faced. Just 24 hours later, rockets were launched from a similar location to the Kabul airport where American troops continued to try to get as many Americans and Afghans as possible out of the country.

“Let me be clear, this was a self-defense, strike, taken under self-defense rules of engagement, based on an imminent threat to attack us,” McKenzie said.

Army Gen. Mark Milley, chairman of the Joint Chiefs of Staff, who had previously described the operation as a “righteous” strike that killed at least one ISIS-K “facilitate,” said Friday that it was a “horrible tragedy of war,” according to The Associated Press.

“In a dynamic high-threat environment, the commanders on the ground had appropriate authority and had reasonable certainty that the target was valid, but after deeper post-strike analysis our conclusion is that innocent civilians were killed,” he told The AP.

Milley also made a commitment to transparency on the incident.