Sen. Josh Hawley, R-Mo., has pledged to hold up all of President Joe Biden’s nominations to the State Department and the Pentagon unless the top official at both departments resign in the wake of the chaotic U.S. exit from Afghanistan.

Hawley called on Secretary of State Antony Blinken, Defense Secretary Lloyd Austin and White House national security adviser Jake Sullivan to take responsibility for the administration’s Afghanistan policy, which involved a disorderly evacuation from Kabul last month and the deaths of 13 American service members, including a Marine from Missouri.

“Instead of planning for the worst, they planned for the best,” Hawley said Tuesday. “And now, there must be accountability.”

Hawley’s legislative threat to block the nominations is mostly symbolic and comes as he attempts to position himself as a leading critic of the White House. Because Democrats control the Senate, Hawley can effectively only delay Biden’s nominations, but his move will force Senate Majority Leader Charles Schumer, D-N.Y., to go through procedural hurdles on the Senate floor, rather than move quickly with a pro forma vote that is more common for nominees to lower-profile posts.

“There is no chance that the threat will ‘work’ in forcing the secretaries” to resign, said Eric Schickler, a politics professor at the University of California, Berkeley. “But Republicans have [made] Democrats choose between staffing the executive branch and spending time on legislation.”

Hawley, who is seen as a potential contender for the 2024 GOP presidential nomination, has backed President Donald Trump’s false claims of fraud in the 2020 election and objected against certifying Biden’s win on Jan. 6 - the same day a pro-Trump mob stormed the Capitol. In a statement on Wednesday, he accused Democrats of playing politics.

A fellow Republican senator, Ted Cruz of Texas, has recently held up dozens of State Department nominations. In June, Hawley unsuccessfully attempted to block the confirmation of Kiran Ahuja to lead the federal personnel agency, citing her past emphasis on the concept of systemic racism known as “critical race theory” that has become a lightning rod for conservatives.

Because Republicans have already been putting holds on Biden’s nominees, the added impact of Hawley’s promise could be minimal, Schickler said. But the cumulative impact of the repeated Republican holds sucks up precious legislative time, he added.

Although there is overwhelming support for Biden’s decision to end the Afghan war, some Republicans are hoping to keep the pullout in the headlines. Americans disapprove, by a 2-1 margin, of how the evacuation was carried out, according to a Washington Post-ABC News poll.

Blinken faced tough questioning about Afghanistan in front of the Senate Foreign Relations Committee on Tuesday, with Republican lawmakers accusing him of failing to heed intelligence signs, misleading the public about what to expect as American troops were leaving Afghanistan and contributing to the failure of the long U.S. mission there. 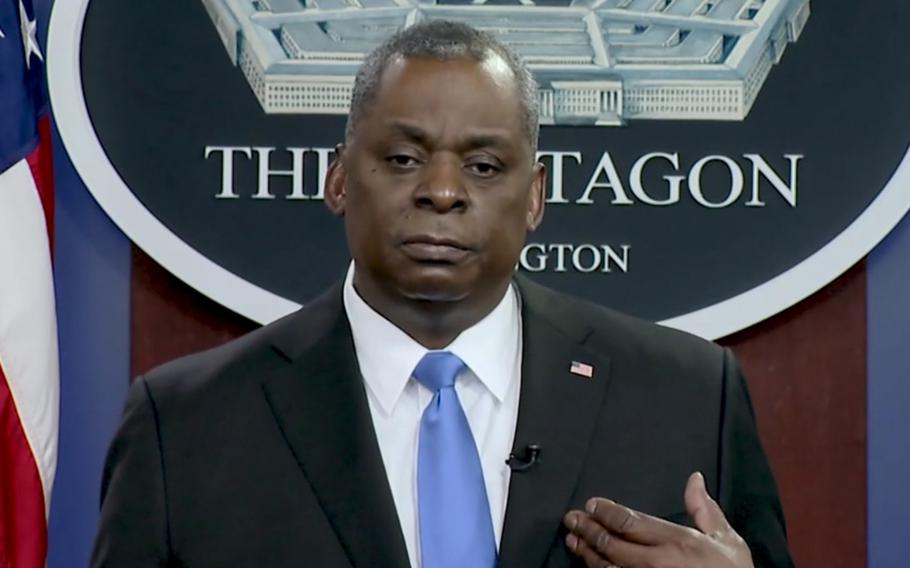 U.S. Defense Secretary Lloyd Austin speaks to U.S. service members about the coronavirus vaccine in this screengrab of a video posted online Wednesday, Feb. 24, 2021, by the Pentagon. (U.S. Defense Department)