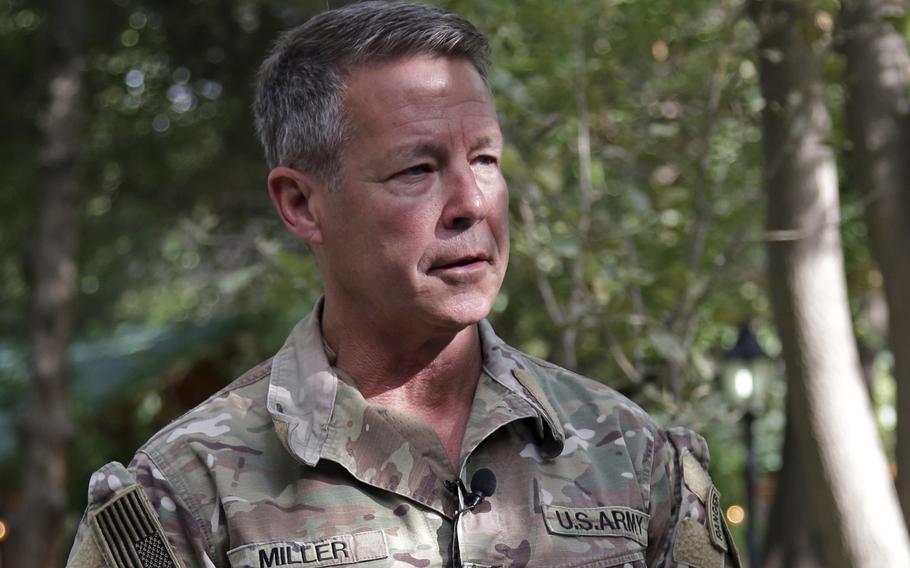 Republicans on the Senate Armed Services Committee castigated President Joe Biden’s decision to pull U.S. forces from Afghanistan and the chaotic withdrawal that followed after a closed hearing Tuesday with the last general to lead America’s longest war.

Miller never met directly with Biden to provide his advice, Inhofe said during a short news briefing held along with eight other Republican members of the committee. The senators declined to provide any other specifics from the session with Miller, citing its secretive nature. Instead, they took turns admonishing Biden and his administration for their handling of the Afghanistan pullout.

“What we’ve seen in Afghanistan has been nothing short of a disaster,” Inhofe said. “You’ve heard everybody say it over and over again. We’re having a hard time finding words to properly describe it.”

Sen. Deb Fischer, R-Neb., attempted to make such a description, saying the “withdrawal was chaotic. It was a blunder. It was disgraceful.”

Sen. Roger Wicker, R-Miss., placed the blame fully on Biden and his advisers, calling the Afghanistan pullout “the worst foreign policy debacle in decades and decades.”

Miller’s closed hearing was the first of several planned sessions that the Senate Armed Services Committee has scheduled to examine the Afghanistan withdrawal, committee officials announced last week. Austin, McKenzie and Milley are scheduled to appear before the committee in a public hearing on Sept. 28. They are expected to face tough questioning from Democrats and Republicans.

Miller commanded U.S. and NATO forces in Afghanistan from September 2018 until he turned over responsibility for U.S. operations to his boss, McKenzie in July, about seven weeks before all American troops left the country. He was not in Afghanistan when the Taliban launched a lightning offensive that allowed the group by Aug. 15 to take control of the vast majority of the country, including its capital Kabul.

Despite leading the last leg of America’s longest war, Miller — a longtime veteran of secretive special operations units — never briefed reporters at the Pentagon nor appeared publicly for an oversight hearing on Capitol Hill during his tenure. John Kirby, the Pentagon’s top spokesman, said Monday that Senate Armed Services Committee officials had asked for the classified briefing. Inhofe said Tuesday that a public hearing with Miller had not been scheduled.

Miller was previously said to have disagreed with Biden’s decision in April to pull all U.S. troops from Afghanistan by Sept. 11. Biden was adamant about ending the almost 20-year war and eventually moved his deadline for American troops to leave Afghanistan up to Aug. 31.

As American forces drew down, the Taliban began its offensive in August to retake dozens of districts across the country. In many regions, it did so with little resistance, as the U.S.-trained Afghan security forces largely surrendered. On Aug. 15, the Taliban took control of Kabul as U.S.-backed President Ashraf Ghani fled his country.

With American troops confined to Kabul’s international airport, the U.S. led a roughly two-week effort to evacuate Americans, foreign nationals from partner countries and U.S.-allied and at-risk Afghans from the Taliban-controlled country. But, the exit was chaotic, as Afghans flocked by the thousands to the airport’s heavily guarded gates.

On Aug. 26, a suicide bomber from the Islamic State group’s Afghan affiliate blew himself up outside a gate, killing 13 American service members, wounding nearly two dozen more, and killing and maiming hundreds in the crowd of people hoping to enter the airfield.

Biden and his administration have defended their handling of the withdrawal, even as some Americans and Afghan partners were left behind after Aug. 31. Secretary of State Antony Blinken on Tuesday told senators that the evacuation was “an extraordinary effort under the most difficult conditions imaginable.”

“Our diplomats, our military, our intelligence professionals … worked around the clock to get American citizens, Afghans who have helped U.S. citizens and our allies and partners, and at-risk Afghans onto planes out of the country, off to the United States or to other locations,” Blinken told the Senate Foreign Relations Committee. “In the end, we completed one of the biggest airlifts in history, with 124,000 people evacuated to safety.”

Republicans were not the only senators on Tuesday critical of the withdrawal. During the hearing with Blinken, Sen. Bob Menendez, D-N.J., called the effort “clearly and fatally flawed.”

“I supported the decision to eventually withdraw our military from Afghanistan,” said Menendez, the chairman of the Senate Foreign Relations Committee. “I have long maintained, however, that how the United States left mattered. Doing the right thing in the wrong way can end up being the wrong thing.”