Biden defends decision to withdraw from Afghanistan, says US troops should not fight if Afghans won't 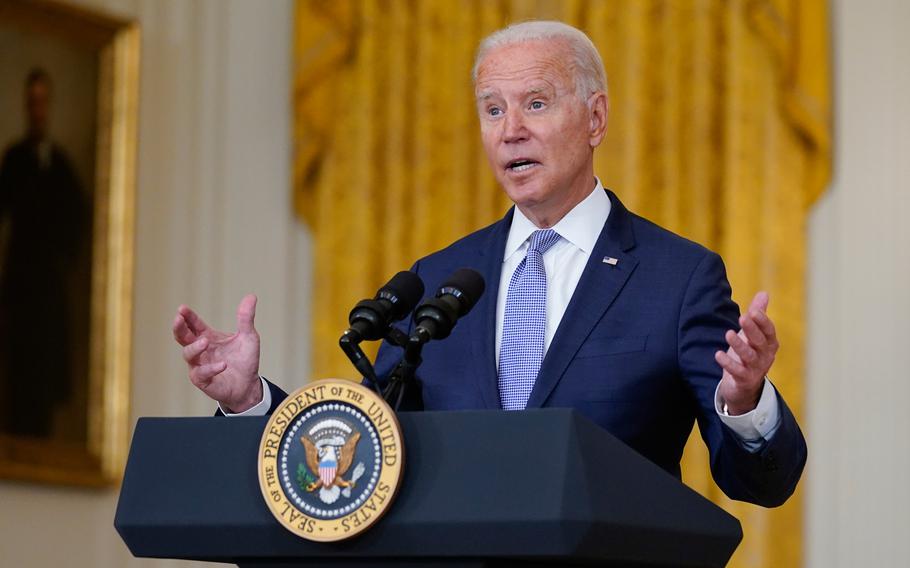 President Joe Biden speaks about prescription drug prices and his "Build Back Better" agenda from the East Room of the White House, on Thursday, Aug. 12, 2021. (Evan Vucci/AP)

President Joe Biden said Monday that the complete collapse of the Afghan government and military in recent days proved his decision to withdraw American forces from Afghanistan is correct.

Biden said during his first public remarks since the Taliban’s sudden return to power that he could not risk more American lives in a civil war in Afghanistan if Afghan troops trained by the United States for the last two decades would not fight for themselves. The U.S. military could provide Afghan troops weapons and tactical knowledge, the president said, but it could not provide them “the will to fight for their future.”

“Here’s what I believe to my core: It is wrong to order American troops to step up when Afghanistan's own armed forces would not,” Biden said during his speech to the nation from the White House’s East Room.

The president admitted his administration had not expected the Taliban would grasp power so quickly. By Monday, the Islamist group was in control of virtually the entire country for the first time since it was toppled by American forces just months after the Sept. 11, 2001 terrorist attacks. The group at the beginning of last week controlled roughly half the country, but rapidly took control of Afghanistan’s key cities in a blitz over the weekend that culminated in the near violence-free capture of Kabul on Sunday amid the collapse of the U.S-backed government.

“I’m left to ask again of those who argue that we should stay, ‘How many more generations of Americans daughters and sons, would you have me send to fight Afghanistan’s civil war, when Afghan troops will not? How many more lives, American lives, is it worth?” he asked.

Biden placed blame on poor Afghan leadership — including on its President Ashraf Ghani, who fled the country Sunday before the Taliban took Kabul — and on former President Donald Trump’s administration. Trump forged an accord last year with Taliban leaders that promised U.S. troops would fully withdraw by May 2021 in exchange for assurances, including that the Taliban would cut ties with terrorist groups such as al-Qaida.

Biden said the agreement and Trump’s order last fall to drawdown American troops in Afghanistan from about 5,500 to some 2,500 ahead of Biden’s inauguration left him with few options.

“The choice I had to make, as your president, was either to follow through on that agreement or be prepared to go back to fighting the Taliban in the middle of the spring fighting season,” Biden said. “There was only the cold reality of either following through on the agreement to withdraw our forces or escalating the conflict and sending thousands more American troops back into combat in Afghanistan, lurching into the third decade of conflict. I stand squarely behind my decision.”

Biden had long opposed the war in Afghanistan, especially since the Navy’s SEAL Team 6 in 2011 killed al-Qaida leader Osama bin Laden in the Pakistan hideout where he had holed up since fleeing Afghanistan years earlier. As vice president, Biden even opposed former President Barack Obama’s 2009 surge of troops in Afghanistan.

Ending the 20-year war was among Biden’s top campaign pledges. Unlike his two immediate predecessors, who made similar promises, Biden will have fulfilled that promise when the last U.S. troops leave Kabul’s Hamid Karzai International Airport by Aug. 31.

They will leave with the Taliban in control of the country and many Afghans fearful of their rule. Thousands of Afghans rushed to the Kabul airport in recent days in a desperate attempt to escape the country. Chaotic scenes, including Afghans clinging desperately to moving U.S. Air Force jets trying to take off, have been posted to social media. At least seven people have died amid the tumult at the airport, U.S. defense officials said.

Biden has approved flowing in some 6,000 U.S. Marines and soldiers during the coming days to help evacuate thousands of Americans and Afghans from the Kabul airport, Pentagon officials said. The airport was shut down for much of Monday as Afghan civilians flooded the runway, but Pentagon officials said it had reopened by late Monday and flights had resumed.

Biden’s handling of the evacuations of U.S.-allied Afghans and their families is among the most criticized aspects of the ending of the war. Sen. Joni Ernst, R-Iowa, was among a chorus of Republicans on Monday blasting Biden for not doing more for Afghans seeking special immigrant visas to be evacuated to the United States in exchange for years of helping Americans in Afghanistan.

“This mishandled and haphazard withdrawal executed by this president caused so much of the collapse and panic we are witnessing now and is an international embarrassment and a black-eye for our country that will put more Americans and allies in harm’s way while emboldening our adversaries,” Ernst, an Army veteran, said in a statement after Biden's speech. “The president failed to give any specifics on how he plans to get our Afghan friends to safety or to expedite the Special Immigrant Visa program — something I’ve long pushed for on a bipartisan basis.”

Biden pledged Monday to evacuate the Americans remaining in Afghanistan and thousands of the Afghans and their families who have helped the United States during the past 20 years.

Pentagon officials said Monday that they could soon remove some 5,000 people from Kabul each day, but they did not provide an estimate of how many Afghans they would evacuate.

Biden said he knew his decision to continue the U.S. drawdown from Afghanistan, which he ordered completed by the end of August, would be criticized more in the coming days. He said he would not change his mind.

“I would rather take all that criticism then to pass this decision on to another president of the United States — yet another one, a fifth one,” Biden said. “Because, it's the right decision for our people, the right one for our brave service members who risk their life serving our nation, and it’s the right one for America.”