Family says 7 children were killed in Kabul drone strike; US is investigating 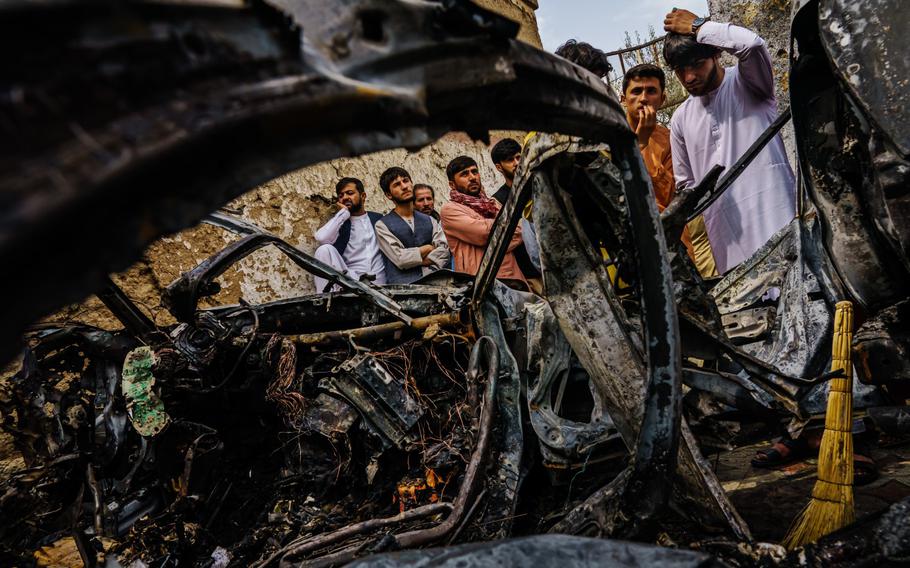 Relatives and neighbors of the Ahmadi family gather around the incinerated husk of a vehicle targeted and hit earlier Sunday afternoon by an American drone strike, in Kabul, Afghanistan, Monday, Aug. 30, 2021. (Marcus Yam, Los Angeles Times/TNS)

(Tribune News Service) — After a day at work, Ezmari Ahmadi was just arriving at his home Sunday in Khwaja Burgha, a working-class neighborhood a few miles west of Kabul's airport, when calamity struck.

As he pulled into the driveway about 4:30 p.m., children — his own as well as those of his brothers and other relatives — swarmed around Ahmadi's Toyota Corolla. His 12-year-old son, Farzad, asked if he could park the car. Ahmadi obliged, put Farzad in the driver's seat and switched to the passenger side.

That's when what the family says was an American missile fired moments before from a drone buzzing nearby drilled through the car, slammed into the ground below and detonated.

In an instant, 10 people were killed, including no fewer than seven children, Ahmadi's brother Emal said Monday. Among the dead were Ahmadi, 40, who the family said worked for a Southern California-based charity; a 25-year-old nephew who was about to be married; and five kids who were 5 years old or younger.

In the driveway, what remained of the Corolla on Monday was a blackened, incinerated heap of metal, melted plastic and scraps of what appeared to be human flesh and a tooth. Near the passenger's side was a hole where a projectile had punched through. Two Los Angeles Times journalists who visited the site examined metal fragments consistent with some kind of missile.

U.S. forces, which are due to complete their pullout from Afghanistan on Tuesday, say they launched a drone strike Sunday that destroyed a car loaded with explosives and suicide bombers heading for Kabul's airport, where a terrorist attack killed more than 180 people Thursday, including 13 U.S. service personnel.

It remained unclear Monday whether the drone strike was linked to the blast that hit Ahmadi's car. In an initial statement after the strike, U.S. Navy Capt. Bill Urban, a spokesman for the U.S. military's Central Command, said the strike had hit its intended target and that there were no indications of civilian casualties.

But in a subsequent statement, Urban said the Pentagon was aware of reports of civilian casualties and was investigating. "We would be deeply saddened by any potential loss of innocent life," he said.

He said the U.S. strike "disrupted an imminent ISIS-K threat," a reference to the Afghan affiliate of the militant Islamic State group, which claimed responsibility for Thursday's deadly bombing on the outskirts of the Kabul airport. In the wake of that attack, the Pentagon launched an airstrike in eastern Afghanistan on Saturday that it said killed both the "facilitator" and "planner" of the bombing.

Urban and the U.S. Central Command have not responded to a request Monday from The Times for further comment.

In Khwaja Burgha, members of Ahmadi's family said there had been only one explosion and that the resulting fireball had partially burned a crimson Toyota SUV that was also in the driveway.

"We heard a loud bang, and the whole house shook," said Abdul Khalil, the Ahmadis' neighbor. One of the rooms in his house is adjacent to the Ahmadis' driveway; the blast had dislodged large chunks of plaster from the wall.

The outside walls of the Ahmadis' home were spattered with bloodstains that had begun to brown.

If the deaths of Ezmari Ahmadi and his family members are determined to be the result of an errant U.S. drone strike, the horrific tragedy would lay bare the dangers of the Pentagon's long-term plans for so-called over-the-horizon attacks as a centerpiece of its counterterrorism mission. Even when U.S. troops were fully deployed in Afghanistan, with CIA operatives and American special forces working alongside Afghan security forces, intelligence was often shoddy and led to mounting civilian casualties that soured many Afghans on the U.S. presence and boosted the Taliban's popularity.

Family members insisted there was no way Ahmadi was involved with ISIS-K. If anything, they would have been considered targets by the extremist group, which counts all who worked with the U.S.-backed Afghan government and its foreign allies as spies, traitors and collaborators.

The family said Ahmadi had worked for the last 16 years with Nutrition & Education International, a nongovernmental organization based in Pasadena. Ahmadi's business card identifies him as a technical engineer, and it bears the logo of the organization, whose homepage carried this message Monday: "Due to the security issues in Afghanistan, our website is temporarily disabled."

An email and telephone call to the foundation from The Times has not yet received a response.

Ahmadi had applied for a special U.S. immigration designation that would allow him to leave Afghanistan and go to the U.S., his brother Emal said. Thousands of Afghans who worked with Western organizations have fled since the Taliban took over Afghanistan earlier this month, but thousands more are in danger of being left behind as the U.S. wraps up its airlift at Kabul airport Tuesday.

Ahmadi's nephew Nasser, who was also killed in Sunday's explosion, had worked with U.S. special forces in the western Afghan city of Herat, and had also served as a guard for the U.S. Consulate there before joining the Afghan National Army, family members said. The 25-year-old, who relatives said was to be married this week, had come to Kabul to see if he could push along his own application for a special immigrant visa.

Sitting on a pile of sandbags outside the family compound, Ezmari Ahmadi's other brother, Ramal, could barely speak through the grief of having lost three children in Sunday's explosion: Binyamin, 5; Arwin, 3; and Aya, just 1½.

He had been in his room when the missile struck. "There was just this big explosion. I was totally in shock. I didn't understand what happened," he said, his eyes red from crying.

For two hours after the blast he remained dazed, but then began to understand that his three children had piled into the car with their uncle Ezmari and cousin Farzad and had been killed.

Mohammad Fawad, a relative, stood enraged in front of the incinerated Corolla.

"I want Joe Biden to know about this. Why do you attack these people and say it's Daesh?" he said, referring to Islamic State by its Arabic acronym, which is considered a pejorative by the group.

"All of these kids were martyred," Fawad said, furiously scrolling through pictures on his phone of those killed. "Look at them. Which one of these people is Daesh? These people worked with the government — with the U.S. And look at these kids. Do you think they're Daesh?"

On Monday afternoon, family and friends gathered at a hilltop overlooking Kabul, with the incessant sounds of jets overhead. At the center of the crowd was a row of coffins, five small and one full-sized, holding the bodies that were deemed too disfigured by the blast for viewing. The other four bodies had been sent home for viewing and for the family to mourn over before they, too, would be brought for burial.

As the last coffins arrived, the crowd turned angry. Some raised printed signs accusing the U.S. of committing a crime.

"America is the killer of Muslims in every place and every time," said Jamshid Mejrabi, a 35-year-old relative of the family. "I hope that all Islamic countries unite in their view that America is a criminal."

As he spoke, an F-18 Hornet jet fighter circled overhead.

"We're now much more afraid of drones than we are of the Taliban," said a colleague of Ahmadi's, who did not want his name published for security reasons. He had gotten lost on the way to the funeral but kept on hearing the jets.

"I was convinced that any minute — boom — and I would be dead."