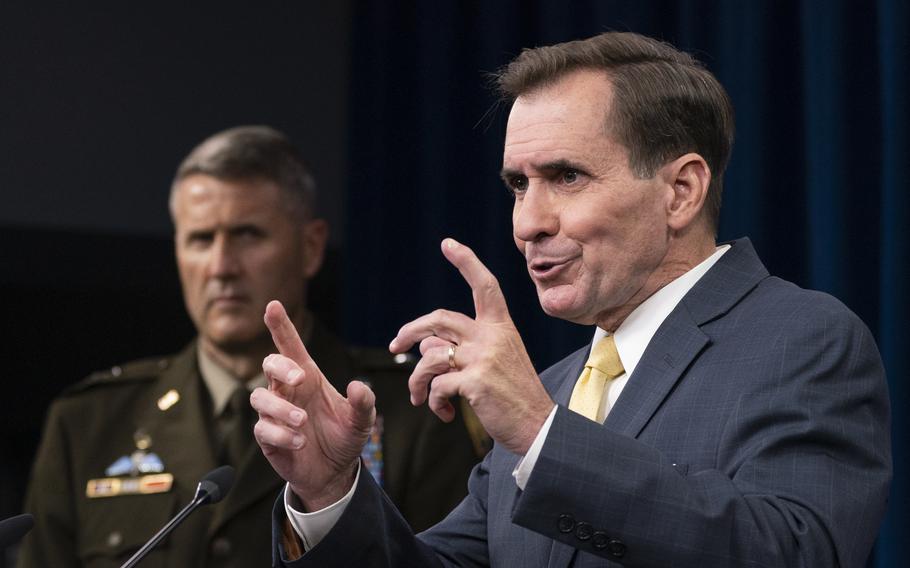 Five rockets were launched at the airport at about 11 p.m. Sunday by ISIS-Khorasan, or ISIS-K, the Afghanistan branch of the terrorist group, said Taylor, the Joint Staff’s deputy director for regional operations. Four of the rockets missed the target, with three landing outside the airport and the U.S. counter-rocket, artillery and mortar system, or C-RAM, intercepting one, he said.

However, Taylor said one rocket did land in the airport, though it did not interfere with evacuations or cause danger to personnel.

The rockets were the second publicly reported ISIS-K attack on the airport that U.S. forces thwarted on Sunday.

Earlier in the day, U.S. forces conducted an airstrike on a vehicle in Kabul carrying ISIS-K fighters and explosives, Taylor said.

“This self-defense strike successfully hit the target near Kabul airport,” Taylor said. “Significant secondary explosions from the targeted vehicle indicated the presence of a substantial amount of explosive material.”

An Afghan official said three children were also killed in the strike, The Associated Press reported Monday. The U.S. has not confirmed any civilian casualties connected to the strike, but chief Pentagon spokesman John Kirby said the military is “assessing and investigating” the reports.

“Make no mistake, no military on the face of the Earth works harder to avoid civilian casualties than the United States military, and nobody wants to see innocent lives taken,” Kirby said Monday. “If we have some verifiable information that we did in fact take innocent life here then we will be transparent about that.”

The U.S. was unable to stop the ISIS-K attack Thursday that killed 13 U.S. troops and wounded 20 others at the Kabul airport. Eleven Marines, a sailor, a soldier and a large number of Afghan civilians were killed when a terrorist wearing an explosive vest detonated it near the airport’s Abbey Gate and ISIS-K gunmen fired on the crowds, the Pentagon has said. The gate is one of three entrances to the airport where large crowds of people had been gathered to vie for evacuation flights.

In response, the U.S. on Friday killed two ISIS-K terrorists and injured a third in a drone strike, defense officials reported Saturday.

The U.S. troops killed and injured in the suicide bomber attack were conducting security checks on Afghan evacuees attempting to enter the airport. U.S. and coalition forces have been evacuating tens of thousands of Americans and Afghans since the Taliban took control of Afghanistan on Aug. 15.

Evacuations continued over the weekend, but at a slower rate as the military began its withdrawal, moving its equipment off the airport before Tuesday, the deadline for the U.S. pullout from the country. The U.S. evacuated about 1,200 people on 26 C-17 transport aircraft since 3 a.m. Sunday, Taylor said. Additionally, two coalition aircraft carried 50 evacuees out of Kabul.

The previous week, U.S. and coalition aircraft were flying more than 10,000 people out of Kabul each day. In total, U.S. and coalition forces have evacuated more than 122,000 people from Afghanistan since late July, about 116,700 of whom were evacuated since Aug. 14, Taylor said. Most evacuees are Afghans, though about 5,400 were Americans, he said.

Kirby said the evacuation operation is already considered “the largest airlift that the U.S. military has conducted” in history.

With one day left in Kabul, the threat to U.S. troops continues to climb as more troops and military equipment leave the country, Kirby said.