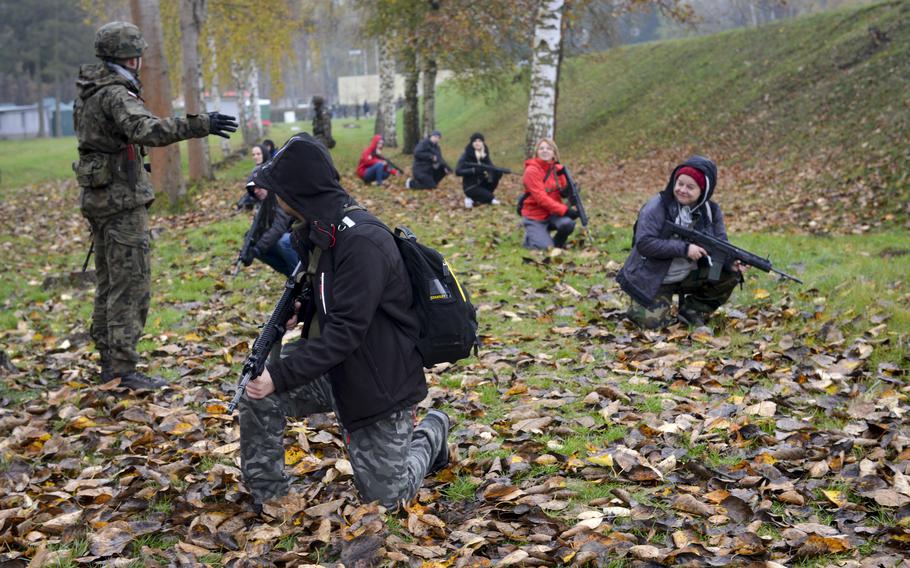 Polish civilians kneel as they listen to a soldier at the Military University of Technology in Warsaw, Poland, explain how to survey their surroundings while marching through dangerous areas, as part of a familiarization course Nov. 5, 2022. (J.P. Lawrence/Stars and Stripes)

Elsewhere on the soggy grounds of the Military University of Technology’s shooting range, dozens of Polish civilians attempted to spark fires with flint and steel as rain fell and practiced self-defense with Polish troops.

The exercises are part of the Polish Ministry of National Defense’s new “Train with the Army” project, an initiative born out of the public’s anxiety over the war in neighboring Ukraine. Weekend courses for thousands of Poles began in October and, due to popular demand, will continue into January.

“People are keen to learn and to know the proper ways to react when alarm sirens sound, how to hold and load a real gun, how to use a gas mask as well as develop basic survival skills,” said Maj. Michał Tomczyk, a representative for the Polish defense ministry.

Aleksandra Maj, a 36-year-old clerk for a government office, said she hoped she would never have to use the skills she picked up during a recent training session. But the opportunity to train as soldier, even if just for a day, offered a “taste” of the kind of crisis preparation that Maj had been looking for since Russia invaded Ukraine in February.

“We don’t know how this war will end or won’t end, and I would like to be helpful to society if something happens here in Poland,” she said after learning how to handle a rifle. “I want to know how to behave and what I can do to help soldiers.”

More than 3,500 Polish citizens from 18 to 65 years old participated in courses run by 17 military units across the country in October and November, according to Tomczyk. Thousands more were unsuccessful in securing spots. 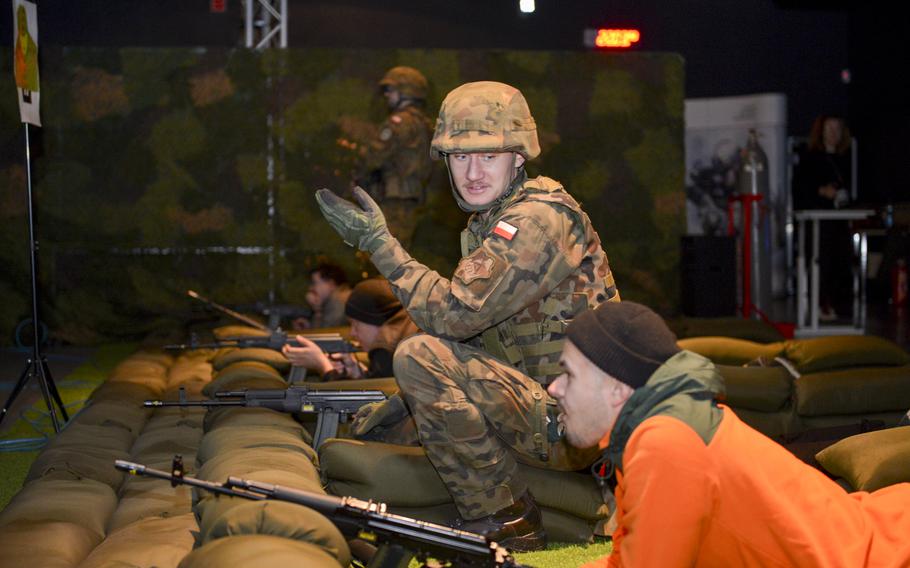 A Polish soldier gives shooting tips to a civilian trying out a laser rifle training course as part of a familiarization course at the Military University of Technology in Warsaw, Poland, on Nov. 5, 2022. (J.P. Lawrence/Stars and Stripes)

Many signed up over fears the war could spill into NATO member Poland, a concern heightened last month when an errant Ukrainian air defense missile landed in a Polish border town, killed two farmers and raised the specter of a shooting war between the Western alliance and nuclear-armed Russia.

Some trainees want to brush up on skills that they learned long ago in the army. Others come to size up the military as Poland embarks on an ambitious plan to double the size of its armed forces to 300,000 troops.

“I want to see what’s happening in the Polish army and why we should build this army bigger, better and faster,” said Jacek Bachulski, a 45-year-old Warsaw city government employee. “I figure it’s not my place to join the army, but I want to see the guns and other things.”

Poland’s military buildup comes amid an influx of American service members into the country to counter Russian aggression. U.S. Defense Secretary Lloyd Austin visited Warsaw to inspect troops shortly before Russia’s invasion, remarking that “seeing American soldiers and airmen standing alongside Polish soldiers and airmen is actually, for me, a common scene.”

In April, Austin and Polish Defense Minister Mariusz Błaszczak agreed to work together to help the Polish military become one of the most capable in Europe.

The civilian training program, which includes learning how to heat up ready-to-eat meals, is not meant to function as a recruitment drive but exposing ordinary Poles to life in the military could help the defense ministry meet its lofty enlistment goals, said Maj. Paweł Wojcik, an instructor at the university.

“Perhaps, maybe in the future, many of them will join the force,” he said. 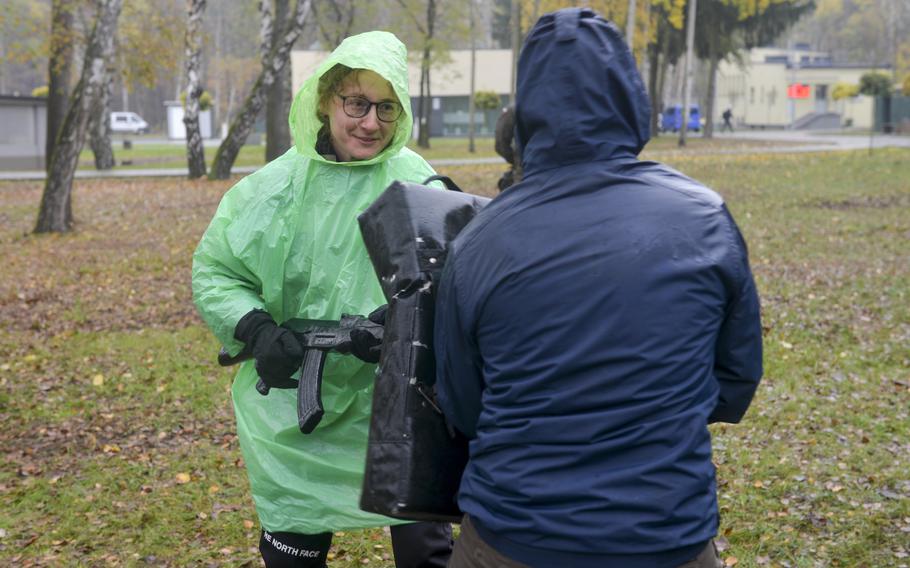 Danuta, a Polish woman who lives in England and who declined to provide her last name, jabs her training rifle at an instructor while learning self-defense at a course at the Military University of Technology in Warsaw, Poland, on Nov. 5, 2022. (J.P. Lawrence/Stars and Stripes)

Danuta, a 35-year-old Polish citizen who lives in England, plans to be among the recruits. She flew to Warsaw specifically for the training session, hoping to gain some experience before applying to a Polish military academy to become an officer.

“Due to the situation next to our border, I think it would be good to be part of the army and support my country,” she said, declining to provide her last name. “We need to be strong, especially militarily.”

Russia’s war in Ukraine triggered a defense spending spree in Poland, with Warsaw pledging to raise funding for the military from 2.4% of gross domestic product this year to 3% next year. The Polish government aims to ultimately boost that figure to 5% and is heavily investing in modern weaponry from South Korea and the United States, including Apache attack helicopters, Patriot air-defense systems, High Mobility Artillery Rocket Systems, F-35 fighter jets and 250 Abrams tanks to replace Soviet-era tanks sent to Ukraine.

As part of NATO, Poland is expected to dedicate at least 2% of its gross domestic product to defense. It has met that target for years and consistently ranks as one of the top 10 contributors to the 30-member military alliance.

“Thanks to [these] investments, we will become the most powerful [NATO] land force in Europe,” Błaszczak declared in July.

The threat posed by Russia has driven public enthusiasm for the military to new highs. Poland ended an unpopular 90-year tradition of compulsory military service in 2009, shedding a relic of its communist past. But a state poll during summer showed a sharp uptick in support for bringing it back.

“We see what’s happening in Ukraine right now and we remember that 60 years ago, the same happened in Poland when the Russians came and raped and killed people and took ground and did other bad things," said trainee Bachulski, referring to his country’s suffering as a World War II battlefield.

Some 94% of Poles see Russia as a major threat compared with 65% in 2018, according to a June survey by the Pew Research Center, a U.S. think tank. 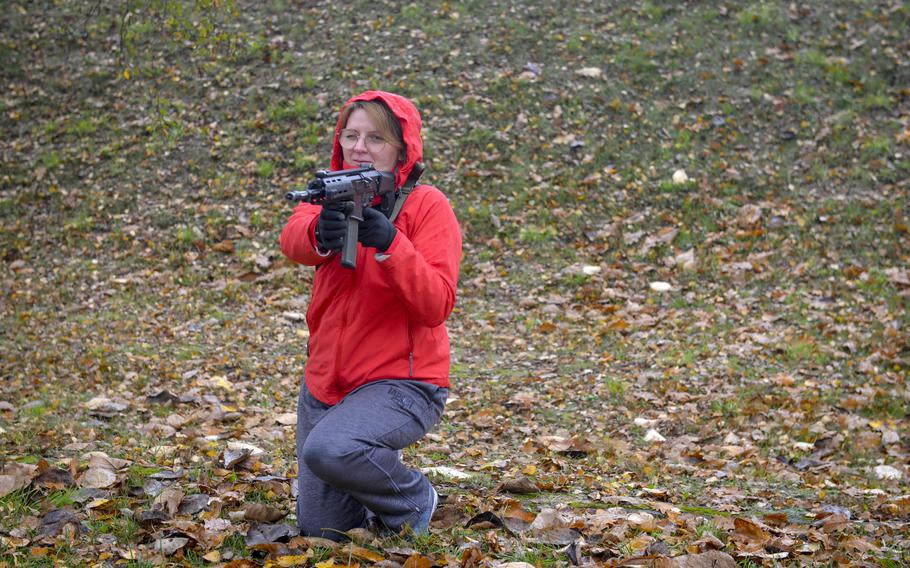 Renata Niedziolka, a 42-year-old accountant from Warsaw, Poland, peers down the barrel of her training rifle as part of a familiarization course at the Military University of Technology in Warsaw, Poland, on Nov. 5, 2022. “I wanted to learn new skills, in case of, you know, an invasion,” said Niedziolka, who has been following news on Russia’s war in Ukraine intensely. (J.P. Lawrence/Stars and Stripes)

Poland shares a 144-mile border with the Russian exclave of Kaliningrad and a long history of being conquered by German and Russian forces. It also must contend with Russia’s closest ally, neighboring Belarus, which instigated a crisis last year by pushing migrants into Poland and allowed its territory to be used as a staging ground for Russia’s assault on Ukraine.

“The development of the Polish armed forces is Poland’s response to the neo-Cold War security conditions created by Russia’s imperial and aggressive policy,” he wrote in an email.

Unlike the first Cold War, when the U.S. and its Western allies faced off against a Soviet Union-led Eastern bloc that included Poland, Koziej anticipates a deepening of relations between Poles and Americans. He described the U.S. as Poland’s “most important military partner” and said the relationship between the countries has evolved from one of “historical sympathy” to mutual interest.

The two nations' historical ties are perhaps best represented at Camp Kosciuszko in the western Polish city of Poznań, home to the first permanent U.S. military base on NATO’s eastern flank. The garrison for the U.S. Army’s V Corps, announced in June, is named in honor of Tadeusz Kościuszko, a Polish national hero who fought for the U.S. during the Revolutionary War.

About 10,000 American soldiers are now stationed in Poland, an increase of 6,000 since the beginning of the year. U.S. forces in Europe surged from 80,000 to 100,000 following the Russian invasion of Ukraine.

Koziej said he believes the U.S. will need to send even more troops to Poland as his country beefs up its military. There will be new opportunities for training and collaboration, he said, particularly in missile and cyber defense and drone warfare.

“Expanding the cooperation of the Polish armed forces with the U.S. Army is an objective necessity,” he wrote. 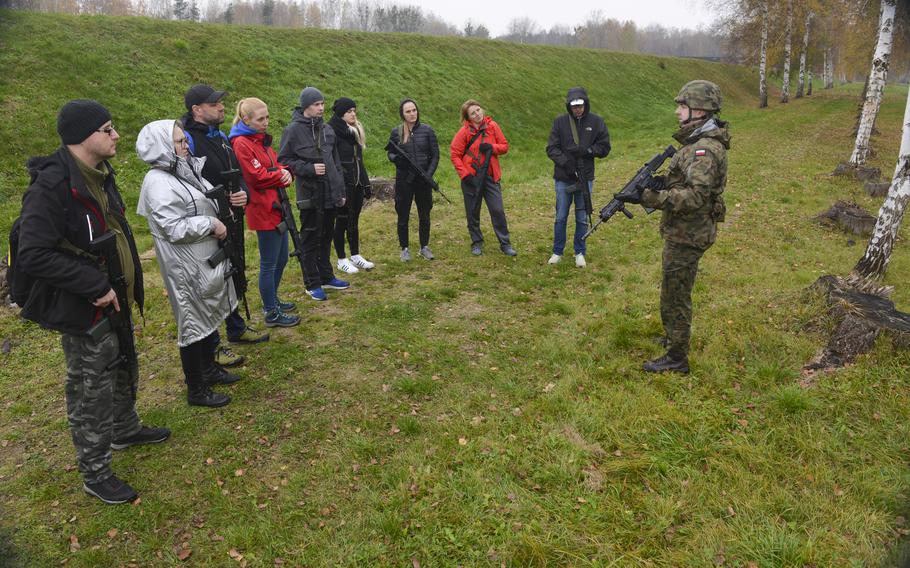 A Polish soldier instructs a group of civilians on how to march through a potentially dangerous area in a two-column formation as part of a familiarization course at the Military University of Technology in Warsaw, Poland, on Nov. 5, 2022. Hundreds of civilians have signed up for shooting lessons, survival skills and gas mask training in recent weeks, with some saying they are motivated by fears of war with Russia. (J.P. Lawrence/Stars and Stripes)

American troops in Poland are offering much of the same support that they offered to Germany during the Cold War, said Mark Cancian, a retired U.S. Marine Corps colonel and senior adviser at the Center for Strategic and International Studies, a Washington-based think tank.

“We’re increasing connections, doing exercises with them and learning how to work together,” he said.

Over time, Poland’s military spending will raise its profile within NATO, Cancian said, and place the country on near equal footing with prominent alliance members such as the United Kingdom and France. Such influence has so far eluded Poland largely due to political discomfort with the country’s ruling nationalist Law and Justice Party, which has snubbed democratic norms, he said.

“I think the experience of the Ukraine war has sort of transcended those political reservations,” Cancian said. “The Polish military getting larger and better and more interoperable means that it will become a major player.”

For some Poles, however, the prospect of a mighty armed force is a small comfort. Wars in Afghanistan and Iraq and even the successful routing of a Russian military convoy moving toward Ukraine’s capital Kyiv in the spring have shown that small groups of people can pick off large enemy targets, said Jarek, a 47-year-old Polish army veteran who declined to provide his last name.

“Even a very strong army can have very big troubles with simple people who can fight in the woods or in the streets, who can resist against regular soldiers,” he said at a recent training session for civilians outside Warsaw. “So I think we should all be prepared at least a bit to stay safe, to use arms — even simple ones — and to have some knowledge of survival.”