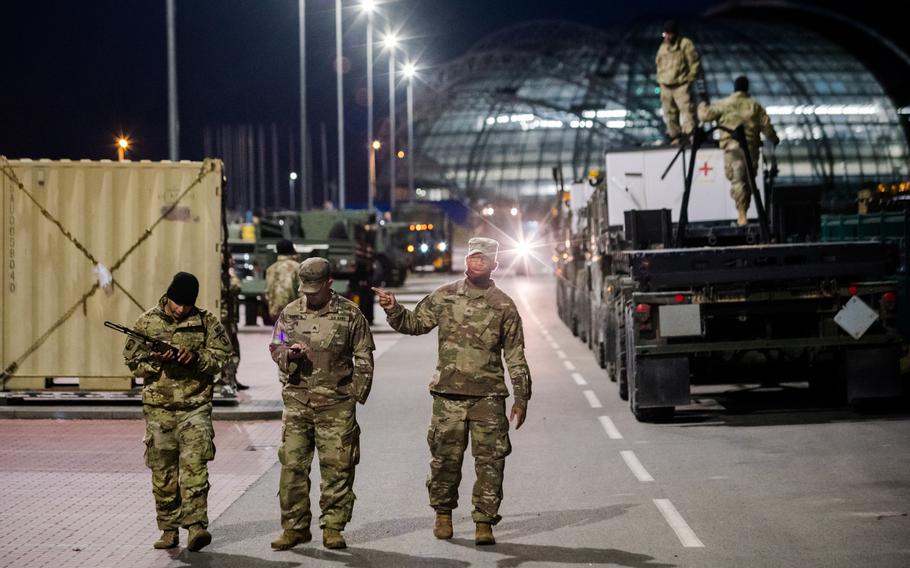 Soldiers from the U.S. Army’s 82nd Airborne Division are seen Feb. 19 next to the G2A Arena, the division’s main base, at Rzeszow-Jasionka airfield in Rzeszow, Poland. (Wojciech Grzedzinski/Washington Post)

Now, U.S. military Humvees are parked behind newly erected barriers outside. Rooms are lined with cots for thousands of soldiers from the U.S. Army’s 82nd Airborne Division. And the ground floor is outfitted to receive people who may flee Ukraine, about 30 miles to the east.

A new war on the edge of Europe has the potential to unleash the continent’s biggest humanitarian crisis since the Syrian civil war triggered the arrival of more than 1 million refugees in 2015. At every level, plans are complicated by huge unknowns. Could there be a trickle of people seeking safety inside the borders of the European Union — or potentially millions?

Polish officials have indicated that a worst-case scenario could see as many as 1 million people arriving from Ukraine in case of a full-scale Russian invasion. Hungary, which also borders Ukraine, has said it is sending troops to the border, partly in preparation for refugees. Romania has said it is considering refugee camps.

But Poland, which is already home to as many as 2 million Ukrainians and shares more than 300 miles of border with the country, is expected to bear the brunt of any influx. Officials in Przemysl, a Polish city next to the border, said the city was asked on Monday whether it had space to house up to 1,000 Americans leaving by land.

As urgency has built, the E.U. commissioner for home affairs, Ylva Johansson, traveled to Warsaw earlier this week, where she said Europe was “well prepared” for an influx. But in towns along the border, some city officials don’t feel the same as they work on their own to designate gym halls and student dorms as potential waystations.

“We don’t of course know yet what is going to happen, but we have to plan also for the worst,” Johansson said during her visit.

“Right now,” said Rzeszow’s mayor, Konrad Fijolek, “it’s difficult to even assess the needs or the scale.” He had preselected a few of the city gyms as potential emergency accommodations: “Just so we feel more prepared.”

What is happening on a local level is all ad hoc, he said. “People are swapping information as to who would do what, and what town would do what potentially,” he said.

Poland’s Interior Ministry said that it is “preparing for various scenarios.” Johansson has said contingencies include scenarios of a Russian incursion limited to the east, where most of those displaced would be expected to flee to western Ukraine. But a larger-scale invasion could send people spilling into Poland and other E.U. nations.

“We are ready to help all those who will be forced to leave Ukraine,” Poland’s minister of national defense, Mariusz Blaszczak, said last week in a news conference alongside Defense Secretary Lloyd Austin. As a nation with such a traumatic experience during World War II, “we know what support is all about,” he said.

When the first U.S. troops touched down in Rzeszow earlier this month, emotions were mixed, said Fijolek, the mayor. Management at the G2A Arena near the city’s airport called him just 48 hours before the first troops arrived. The message: All the exhibition center’s events would need to be rescheduled.

The 82nd Airborne, now set up in the exhibition center, is fresh from its mission in Afghanistan as part of the huge but chaotic airlift out of the country. Maj. Gen. Chris Donahue, the division’s commander who is in Poland, was the last soldier to walk up the ramp on the final U.S. military plane to leave Kabul.

“We are prepared to assist, but only as needed,” said a Defense Department official, who spoke on the condition of anonymity because he was not authorized to speak to media. While the division’s evacuation efforts in Afghanistan may evoke airlifts, any operation evacuating refugees from Ukraine “we anticipate being by ground,” the official said. He added that he didn’t think numbers fleeing would be near the tens of thousands predicted.

The 82nd Airborne make up the bulk of a contingency of 4,700 U.S. troops dispatched to Poland in recent weeks to join an existing American rotational force of 4,000 - a deployment that aims to bolster NATO’s eastern flank, and whose mission stretches far beyond the humanitarian.

While the 82nd hasn’t granted media access to their bases in Poland, officials described the setup at the arena. In addition to thousands of troops based there - living conditions that the official described as “plush for the 82nd” - more than a dozen U.S. Black Hawk and Chinook helicopters now sit on the airstrip in the Polish town of Mielec, where drones could be seen lifting off over the weekend. Curious locals pull up to take a look.

“We have the ability to see very far out,” the official said.

Several hundred more soldiers are based at a “staging area” in the mountains eight miles east of the border with Ukraine. U.S. soldiers make three-mile treks to the nearest shop in a hamlet of just 65 homes, stocking up on energy drinks, cigarettes, sausages and potato chips to supplement their military rations.

“We are afraid if there is a full-blown conflict, there will be a wave of immigration,” said Barbara Koziolek, 43, who owns the village store. Not because she is afraid of immigrants, she said. But Polish authorities sealed off a border zone with Belarus last year as Russian ally Alexander Lukashenko used migrants to try to punish E.U. nations over sanctions.

One of Koziolek’s neighbors, who owns a home elsewhere, has left the village and said she wouldn’t return for another three months.

“Some people are afraid,” Koziolek said. But in the meantime, they are enjoying the new business.

So far, the number of people leaving for Poland has been limited. At the border crossings, commuters have continued to cross back and forth. Oleg Batz, 23, had spent the weekend at home in Ukraine, before returning to Poland on Sunday for a three-week stint on a construction site. He said if there was a war, he would not stay in Poland.

Limited footfall at some embassy sites

In Przemysl, a hillside town five miles from the Ukrainian border so packed with churches that it’s earned the nickname “little Rome,” one Ukrainian family was put up in a local monastery. But they decided to go home again on Monday as they were fed up with their portrayal in the press as refugees, according to a nun hosting them.

In a hotel on the edge of town, a U.S. Embassy-staffed “welcome center” set up to provide biscuits, coffee and consular services to American citizens leaving Ukraine by land has seen limited footfall since it opened. And a temporary office for the South Korean Embassy set up in another spa hotel was yet to receive any citizens in need.

But it’s unclear how Russian President Vladimir Putin’s decision to send forces into two separatist areas of eastern Ukraine - and recognize the region’s independence from Kyiv - could play out in coming days.

“Perhaps not everybody has left,” Lapa said.

The State Department has declined to provide information on how many of its 6,600 citizens based in Ukraine are still there. While U.S. troops in Poland have the capability to airlift out Americans and other foreign nationals, “we’ve moved beyond thinking that will be necessary,” the Defense Department official said.

President Joe Biden has said that the United States won’t be launching operations to rescue any stranded Americans in Ukraine, citing the fact that a direct confrontation between Russian and American forces would risk “world war.”

Lapa said that as far as he knew, not many Ukrainians had left the country so far, though “several dozen” Ukrainian temporary workers register with the city each day, up around 50% or more from usual. Property prices have also climbed, he said, amid demand from wealthy Ukrainians.

Polish Prime Minister Mateusz Morawiecki last week said he planned to assemble a team to look at logistics, transport and infrastructure. But members of the local Ukrainian association fear that not enough is yet planned.

“We don’t think this country is ready for the wave of refugees that is expected,” said Andrzej Komar, vice president of the Association of Ukrainians in Poland. “A strategy from the government is needed.”

The group plans to convert their building into a help center for newly arrived refugees.

Many Ukrainians have relatives and support networks on the Polish side of the border. The Ukrainian population in Poland has grown significantly since 2014, with conflict, economic factors and visa-free travel meaning many moved to Poland for work. Przemysl has a population of around 2,000 Poles of Ukrainian origin, and thousands more temporary workers cross back and forth over the border for temporary work.

In 2016, tensions flared in the city, as nationalist groups rallied against Ukrainian immigration. Ukraine and Poland share a difficult history, with massacres of Poles at the hands of the Ukrainian Insurgent Army in the 1940s still remembered by some of the older generation.

“Things come out under extreme circumstances,” Komar said. But the city and country rallied around Ukraine in 2014 when Russia annexed Crimea from Ukraine and war broke out in eastern Ukraine against Russian-backed separatists. The city’s hospitals treated those injured in the conflict in eastern Ukraine.

Complicating the Polish response are difficult relations between the state and aid groups following the migrant crisis that unfolded on Poland’s border with Belarus.

“I worry about the trust,” said Anna Dabrowska, who works with Homo Faber, a human rights organization that runs integration programs, and met with city officials last week to discuss where resources were needed.

“We are hoping for the best, but preparing for the worst,” Komar said.

The Washington Post’s Karolina Jeznach and Dariusz Kalan contributed to this report.