MEDYKA, Poland — Kateryna Marchenko and her elderly mother spent days getting from Ukraine’s capital of Kyiv to this Polish border town before clearing a security checkpoint and stepping into the unknown as war refugees.

The angst over what awaited them in Poland, she said, was outweighed only by the danger of staying behind in Kyiv, where Russia has stepped up its attacks.

“We needed to get here. What the Russians are doing shouldn’t be happening in our century,” said Marchenko, who arrived in Medyka on Wednesday after spending multiple nights in freezing temperatures en route.

Luckily for the Marchenkos and another Ukrainian family with three children, as they stepped across the border they bumped into a prominent German politician with Polish ties.

Parliamentarian Paul Ziemiak had driven to the crossing at Medyka, wanting to see for himself what was happening on the ground. He met the two Ukrainian families as they entered Polish territory and helped walk them across the border.

“I asked them where they wanted to go. They said Germany,” said Ziemiak, who was born in Poland and also has ancestral ties to Ukraine. 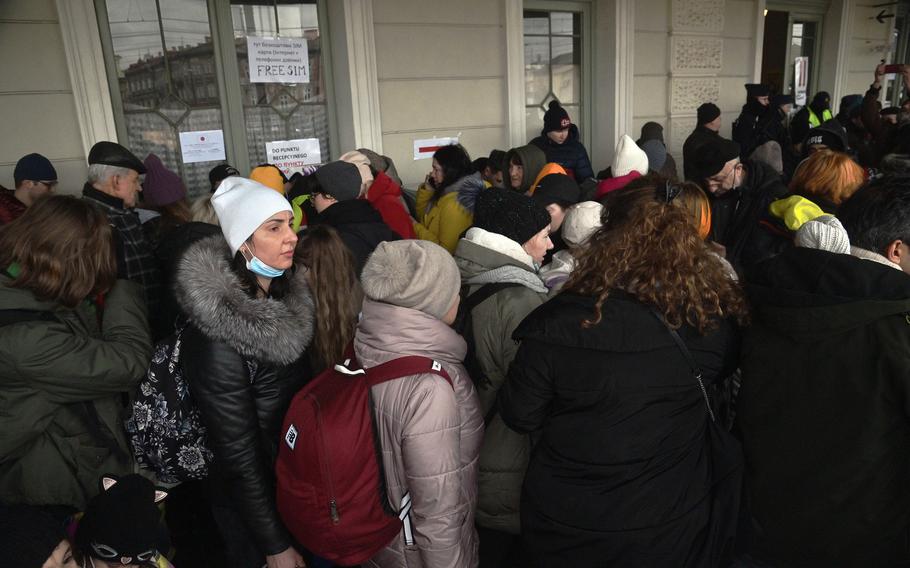 Refugees from Ukraine arrive at the Przemysl, Poland train station, March 2, 2022. Volunteers helped those arriving by feeding them, finding transportation to other places in Europe or offering women and children cots to rest on. (Michael Abrams/Stars and Stripes) 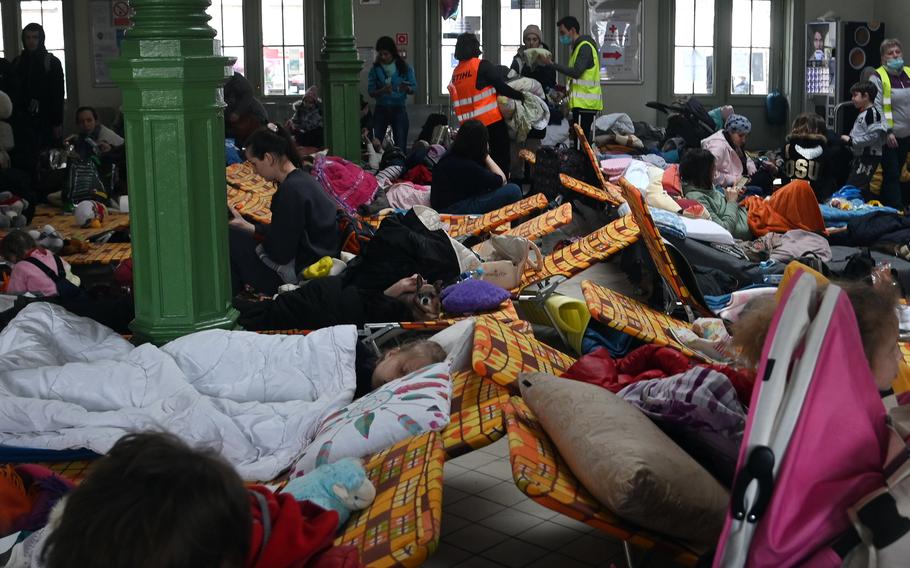 Women and children from Ukraine rest in a hall at the Przemysl, Poland, train station, March 2, 2022. (Michael Abrams/Stars and Stripes) 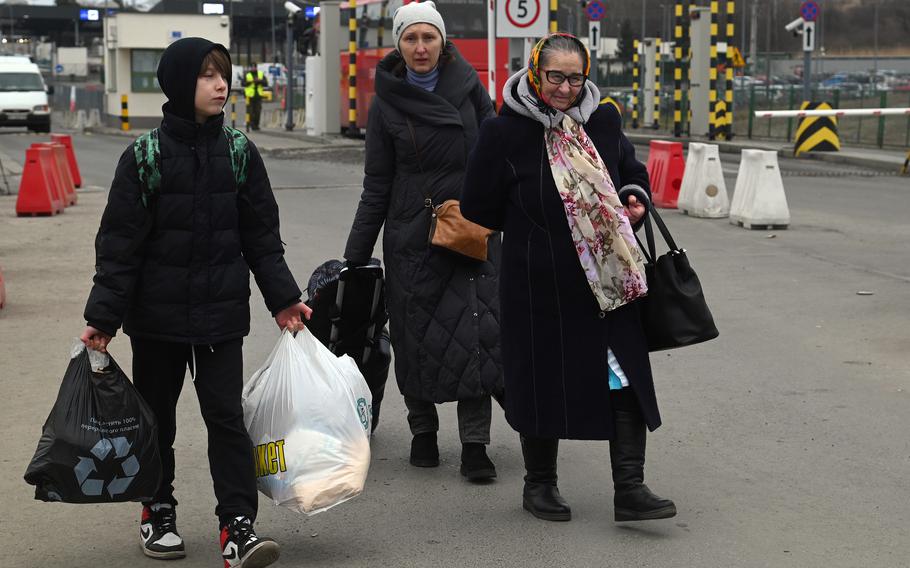 Refugees from Ukraine cross the border into Poland at Medyka, March 2, 2022. More than 1 million people have fled Ukraine since Russia’s full-scale invasion last week, according to the United Nations. (Michael Abrams/Stars and Stripes)

About an hour after their arrival, the refugees loaded their suitcases into Ziemiak’s van, bound for Germany courtesy of the parliament member from the state of North Rhine-Westphalia.

“We were very lucky,” Marchenko said.

The refugee crisis has entered unprecedented territory, with more than 1 million people fleeing Ukraine in a week’s time, according to the United Nations. More than half of them have landed in Poland.

“I have worked in refugee emergencies for almost 40 years, and rarely have I seen an exodus as rapid as this one,” UN High Commissioner for Refugees Filippo Grandi said in a statement Thursday. “Hour by hour, minute by minute, more people are fleeing the terrifying reality of violence. Countless have been displaced inside the country.”

If the conflict doesn’t end immediately, millions more are likely to be forced to flee Ukraine, he said.

The border crossing at Medyka is perhaps the busiest of them all. A steady stream of people flows across the border each day, some on foot, others by car or bus. 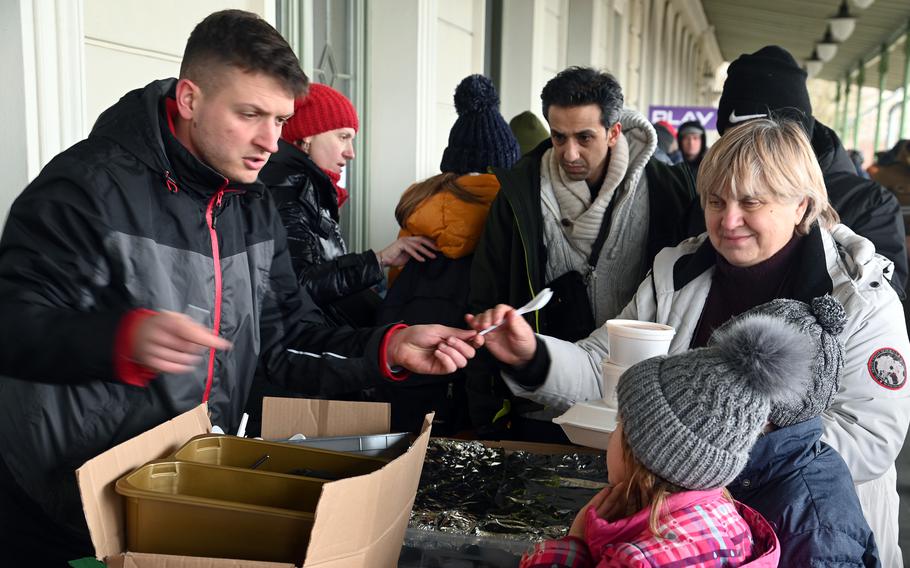 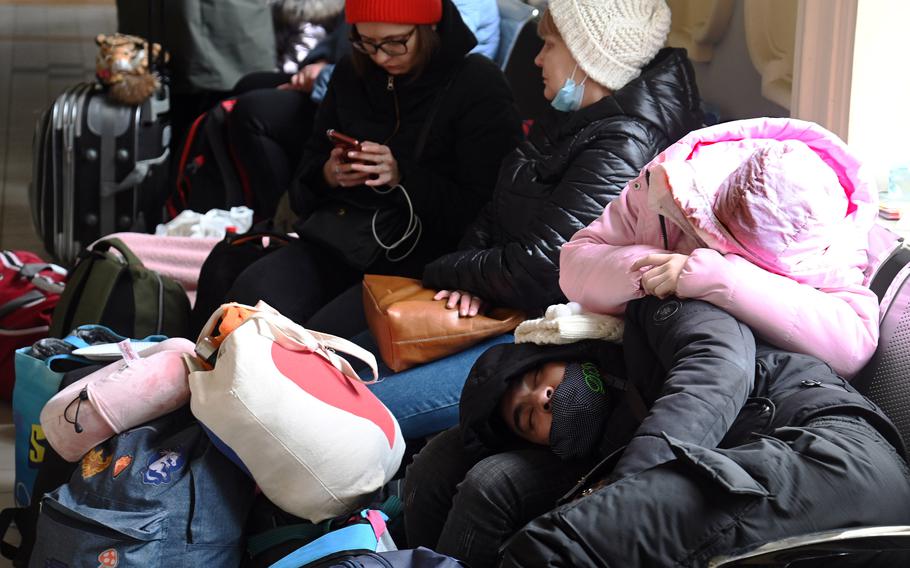 Exhausted from their journey, refugees from Ukraine rest inside the train station at Przemysl, Poland, March 2, 2022. According to the United Nations, more than 1 million people have fled Ukraine in a week’s time. (Michael Abrams/Stars and Stripes) A baby sleeps through the commotion at the Przemysl, Poland, as refugees arrive from Ukraine, March 2, 2022. (Michael Abrams/Stars and Stripes)

The area also has become a makeshift relief site, with donated supplies and refreshments for the uprooted new arrivals as they plan their next moves.

Oleksandr Shevchuk, a Ukrainian living in Poland, volunteers at one of the relief camps, where people huddle around wood-burning fires in trash cans to stay warm. He said people are giving as much support as they can, whether it’s a bowl of hot soup or assistance in connecting the refugees with relief agencies.

“These are people who have been waiting in line for two, three days just to get in,” he said.

Shevchuk said he has relatives who are still in Ukraine, and they talk with him daily by phone.

“It gets more dangerous by the day,” he said.

For the hundreds of thousands of people fleeing Ukraine, the journey to border countries has been fraught with long waits in subzero temperatures at night.

It’s mostly women and children because Ukrainian men between the ages of 18 and 60 are required to stay behind and help fend off the Russian military. 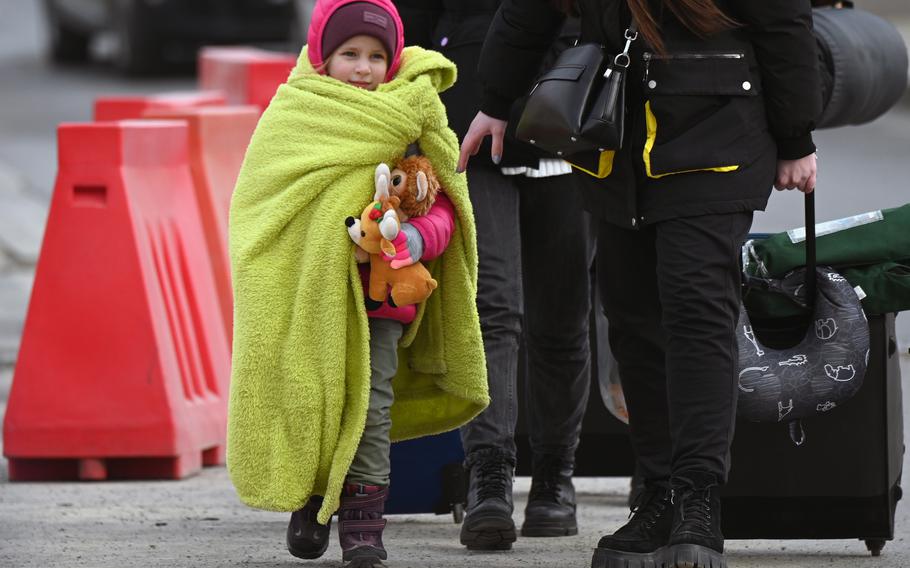 A girls hugs her stuffed animals as she crosses the border from Ukraine into Poland with her mother, March 2, 2022, at the Medyka crossing. (Michael Abrams/Stars and Stripes) Refugees walking and in vehicles wait at the Ukrainian-Polish border at Medyka, before crossing into Poland, March 2, 2022. (Michael Abrams/Stars and Stripes) Foreigners also are in the mix, and allegations have emerged that people of color waiting in lines have faced longer delays than their Ukrainian counterparts.

Janez Lenarcic, the EU’s commissioner for crisis management, said his office has not corroborated any instances of official discrimination at the border, adding that preferential treatment based on race won’t be tolerated.

As for the Marchenkos, their journey to Germany appears to have gone without a hitch. Ziemiak provided this update from the road:

“Intense days in Poland. Now on the way back to Germany — together with Ukrainian women from Kyiv and their children who asked me for help at the border,” he wrote in a tweet that was accompanied by a photo of a McDonald’s tray loaded with food.

“Help where you can,” Ziemiak wrote. “Ukraine needs each and every one of us.”