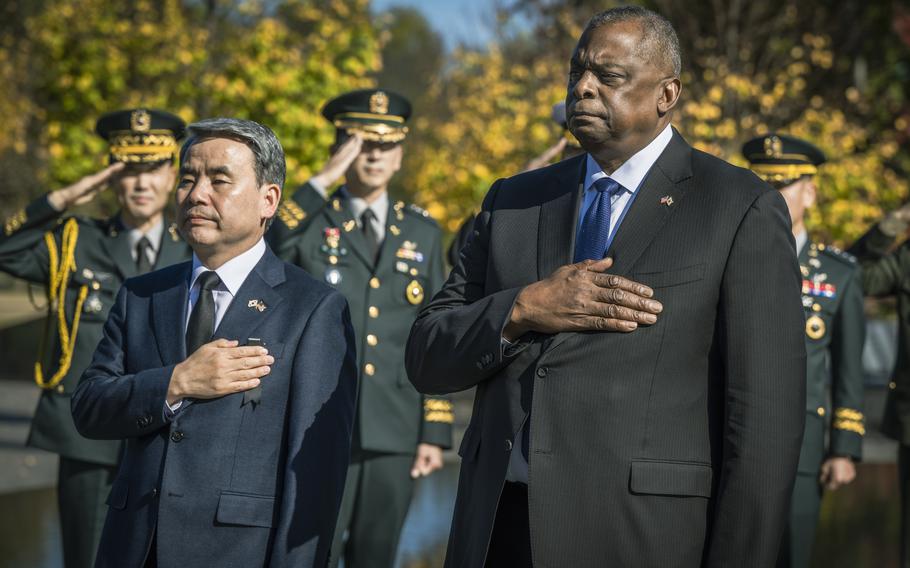 Suspending exercises with the U.S. military “is impossible” in light of threats from North Korea, Minister of National Defense Lee Jong-sup told lawmakers at a parliamentary hearing Monday.

Rep. Cho Sujin, a conservative lawmaker and member of the ruling People Power Party, during the hearing described relations with North Korea as a “fraught situation” that requires people to be “highly attentive.”

Cho called on Lee to answer opposition critics who question whether the increased tempo of exercises is the correct response to North Korea’s record-breaking spate of ballistic missile tests this year. Several progressive South Korean non-governmental organizations and independent party lawmakers have been critical of the joint exercises and allege they fuel the division between Seoul and Pyongyang.

“There are some lawmakers who insist, ‘We should not deprive ourselves of peace,’ and call for the suspension of [South Korea]-U.S. joint military drills. What do you think of it?” she asked Lee.

“(I)t is impossible that we will stop [joint military drills] due to North Korea’s threats,” Lee told Cho.  “Exercises are just one of our military’s primary missions.”

Lee met last week with Defense Secretary Lloyd Austin in Washington, where the two agreed to have U.S. “strategic assets to the level equivalent to constant deployment” in and around the Korean Peninsula.

“Both leaders also reaffirmed the commitment of the U.S. to deploy United States strategic assets to the Korean Peninsula in a timely and coordinated manner as necessary, to enhance such measures, and identify new steps to reinforce deterrence in the face of the [North Korea’s] destabilizing activities,” the Defense Department said in a press release on Nov. 3.

U.S. and South Korean officials have characterized the drills as defensive measures meant to address provocations by North Korea.

The U.S. and South Korea in May resumed large-scale military drills after a five-year pause. The two countries on Saturday concluded their largest-ever aerial exercise, Vigilant Storm, in which approximately 240 aircraft flew 1,600 sorties.

U.S. military assets have made several displays of force against North Korea this year. In September, the aircraft carrier USS Ronald Reagan arrived in South Korea’s largest port for the first time since 2017 for maritime drills with Seoul’s navy.

After those drills ended and North Korea fired an intermediate-range ballistic missile over Japan on Oct. 4, the Ronald Reagan was redeployed to South Korea’s eastern coast to demonstrate “the determined will” of the South Korea-U.S. alliance, according to a statement from South Korea’s Joint Chiefs of Staff.

North Korea, which frequently describes the joint drills as rehearsal for an invasion, lashed out at Seoul and Washington over their Vigilant Storm exercise.

“Intolerable and unpardonable are all the recent challenging moves of the U.S. and South Korea staging military drills for aggression on a large scale,” the state-run Korean Central News Agency reported Monday, citing a senior North Korean military official.

North Korea fired over 65 missiles in 30 days of testing so far this year. The communist regime last fired four ballistic missiles into the West Sea, or the Yellow Sea, on Saturday.