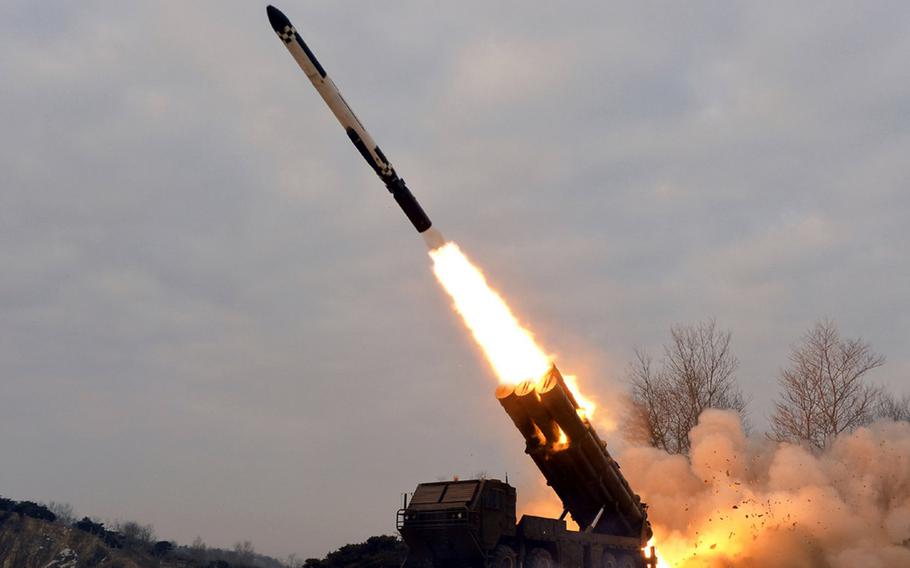 North Korea fired at least 23 missiles off its eastern and western coasts Wednesday, triggering air raid sirens on a South Korean island and a corresponding military response from Seoul.

The barrage began around 6:51 a.m. when four short-range ballistic missiles were fired from North Korea’s western coast, the South’s Joint Chiefs of Staff said in a message to reporters.

Three more short-range ballistic missiles launched from North Korea’s Kangwon province were detected at 8:51 a.m., according to the Joint Chiefs. One landed in the sea about 35 miles east of Sokcho, a major tourist hub on South Korea’s eastern coast, and 103 miles northwest of Ulleungdo, a South Korean island.

The military released another update Wednesday evening, saying that six more missiles had been launched. No additional information was provided.

The North also fired more than 100 artillery rounds from its eastern coast at 1:27 p.m., according to the South’s Ministry of National Defense.

“The South Korean military will never condone such provocative acts,” the Joint Chiefs said, “and will respond sternly … while closely cooperating with the U.S.”

The missile launches were another sign of North Korea’s “destabilizing impact” but did not “pose an immediate threat to U.S. personnel or territory, or to our allies,” according to a statement by U.S. Indo-Pacific Command.

Japanese Chief Cabinet Secretary Hirokazu Matsuno said during a livestreamed press conference Wednesday that the country received no reports of damages but added “we cannot tolerate this.”

“We will firmly respond to this,” the ministry said in a message to reporters.

Roughly an hour after that statement, F-15K Slam Eagles and KF-16 fighters fired three air-to-surface missiles north of the Northern Limit Line, the Joint Chiefs said in a news release. Those missiles splashed down in international waters north of the line at a “corresponding distance” to the North Korean missile that traveled south of the de facto boundary earlier Wednesday, according to the release.

The South Korean military’s actions “showed that it has the will to respond firmly to any provocations,” the Joint Chiefs said.

South Korean President Yoon Suk Yeol presided over an emergency National Security Council meeting on Wednesday morning and described the “unprecedented military provocation” as “a serious threat to peace and stability,” according to a presidential office statement.

Yoon “has ordered a swift response” that would make clear North Korea would “pay a clear price,” the office said.

Some air traffic routes in the East Sea, also called the Sea of Japan, were temporarily closed Thursday due to North Korea’s launches, the South’s Ministry of Land, Infrastructure and Transport said in a news release.

Wednesday’s launches mark North Korea’s 28th round of missile tests with more than 45 missiles fired so far this year, a record. The latest salvo is the largest number of missiles fired in one day since January.

The rare, southward launch comes after North Korea’s state-run media organization threatened the United States and South Korea for their joint military exercises. KCNA on Wednesday reported that if Washington and Seoul “attempt to use force against us,” they would “pay a terrible price.”

U.S and South Korean forces on Monday kicked off Vigilant Storm, a large-scale, five-day aerial exercise consisting of roughly 240 aircraft. Around 100 aircraft from the U.S., including F-35B Lightning II stealth fighters, are participating.

North Korea launching missiles amid the Vigilant Storm exercise shows how “they are not scared” of Washington and Seoul’s alliance, Yang Uk, an associate research fellow at the Asan Institute for Policy Studies in Seoul, told Stars and Stripes by phone Wednesday.

“North Korea wants to figure out how far they can go,” Yang said.

Another academic said that whatever mutual respect remains between North and South Korea is being eroded. Relations between the two countries may deteriorate to a point similar to when former conservative South Korean President Park Geun-hye was in office 2013-17, Professor Hwang Jaeho of Hankuk University of Foreign Studies in Seoul said by phone.

“The South Korean military said it fired missiles at a similar distance to North Korea’s. If a similar incident were to occur, North Korea will surely respond with more provocations and escalate tensions,” Hwang said.