About 100 US aircraft, including F-35s, to take part in large-scale exercise with South Korea 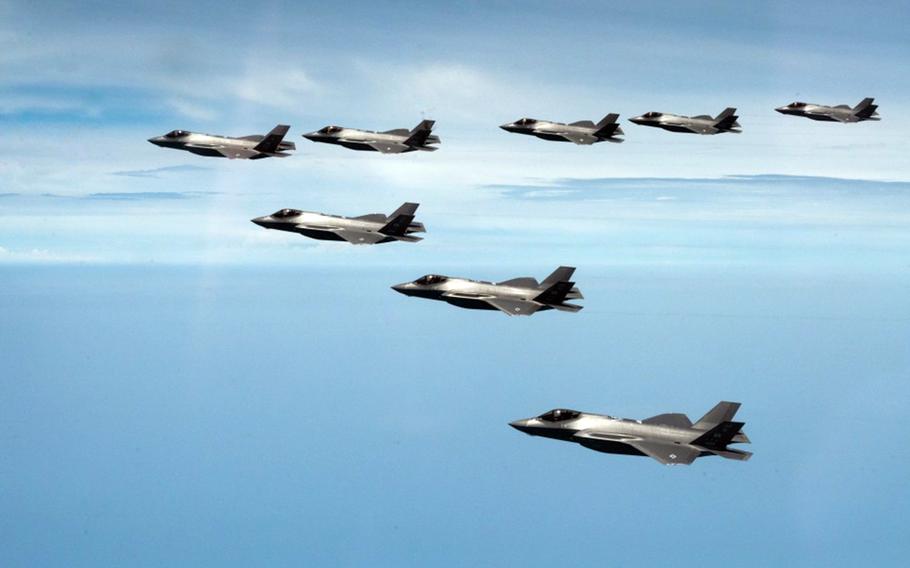 Vigilant Storm, previously known as Vigilant Ace, will take place Oct. 31 to Nov. 4, the spokesman said. The air force declined to say which and how many aircraft will be participating in the drills. It’s customary for some South Korean government officials to speak to the media on condition of anonymity.

However, the Yonhap News Agency reported Tuesday that about 140 South Korean aircraft and an Australian refueling tanker are expected to participate.

The training was planned months in advance and is “part of what a professional military does,” Jeter said.

“Combat readiness is perishable, and all professional militaries practice their skills routinely in order to stay ready,” she said. “This training brings together elements from the U.S. Army, Navy, Marine Corps, Space Force and Air Force, and practices working together with [South Korean] air force capabilities.”

F-35As from the U.S. and South Korea drilled together in July, the first time the stealth fighters from both countries were used in an exercise in South Korea.

The announcement of the upcoming air drills comes five days after North Korean aircraft were detected near the North-South Korean border. Roughly 10 North Korean warplanes flew near the border, prompting the South to scramble fighters, according to a statement from South Korea’s Joint Chiefs of Staff on Friday.

In addition to firing hundreds of artillery rounds, North Korea so far this year has launched more than 40 missiles in an unprecedented 26 rounds of testing, including an intermediate-range weapon that flew directly over northern Japan on Oct. 4.

North Korea fired roughly 100 artillery rounds toward the Yellow Sea on Wednesday afternoon, according to a text message from the Joint Chiefs of Staff the same day.

Japan on Tuesday announced it will impose sanctions against five organizations suspected of having ties to North Korea’s nuclear and missile program. Chief Cabinet Secretary Hirokazu Matsuno during a news conference described the North’s “string of provocations” as “absolutely intolerable” and a threat to Japan’s security.

News of the punishments comes less than a week after Seoul imposed its own sanctions against 31 people and corporate entities suspected of aiding North Korea’s missile program.