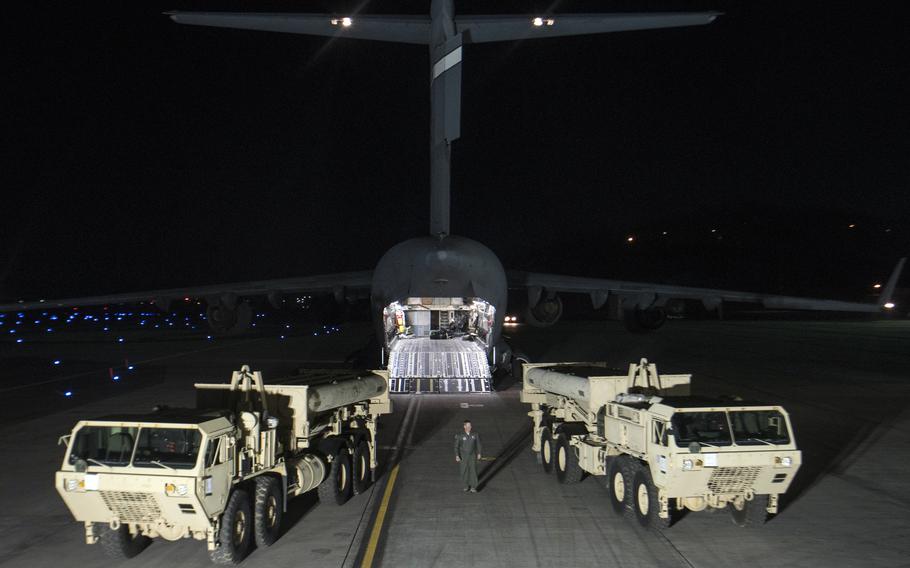 CAMP HUMPHREYS, South Korea – U.S. Forces Korea has delivered equipment that will add functionality to a missile-defense system stationed on the peninsula and better "protect the South Korean people from North Korea’s missile threats," according to a statement from the Ministry of National Defense on Friday.

The new equipment will provide "better performance" for the Terminal High-Altitude Area Defense, or THAAD, system by "improving interoperability” between it and the United States' Patriot missile system, the statement said.

Interoperability is a term often used by the military to describe the ability of a country’s armed forces to use another country’s training methods and equipment.

Another THAAD system was not delivered as part of the package, the ministry added. The new equipment will replace parts in the existing system, and the older equipment will be returned to the United States.

South Korea's alliance with the U.S. is more prepared to respond to the North’s "advanced nuclear and missile threats" because of the THAAD upgrade, the Eighth Army's deputy commander, Gen. Mark Holler, said in the statement. THAAD is defensive system that will not "interfere with strategic and security interests of neighbor countries," he added.

U.S. missile defense agencies have worked toward integrating the Patriot and THAAD systems for at least two years. Multiple tests in 2020 attempted to provide THAAD-generated tracking data on a simulated target to a Patriot system, which would then intercept the target.

The benefits of blending the systems include a "tightly integrated, layered missile defense system" designed to track and intercept targets in various altitudes, Lockheed Martin said in a March press release.

Since 2017, an $800 million THAAD system operated by the U.S. military has been deployed at a South Korean base in Seongju, about 130 miles south of Seoul. The U.S. military at the time said the system was a defensive asset aimed at threats from North Korea.

"When the THAAD system is deployed to the Korean Peninsula, it will be focused solely on North Korean nuclear and missile threats and would not be directed towards any third party nations,” the Defense Department said ahead of the deployment.

Since his May inauguration, South Korean President Yoon Suk Yeol has vowed to boost his country's defensive capabilities and has floated the possibility of installing another THAAD system.

"Securing deterrence against the North Korean threat is a matter of sovereignty, and Seoul should remain open to additional deployments of THAAD in proportion to North Korea’s growing missile threat,” he said in a Foreign Affairs magazine op-ed published Feb. 8.

The THAAD announcement comes amid an uptick in missile activity from North Korea in recent weeks. On Thursday, the communist regime fired two short-range ballistic missiles off its eastern coast, bringing the number of tests so far this year to 23.

North Korea, which is suspected by U.S. and South Korean officials to have prepared for its first nuclear test since 2017, alarmed Japan and its allies when it fired an intermediate-range ballistic missile over Japan on Tuesday.